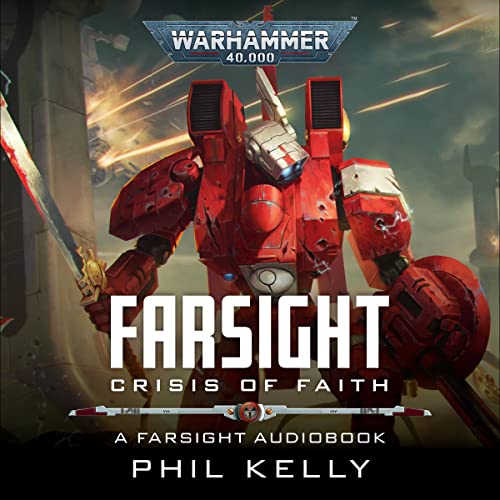 Fresh from his victory on Arkunasha, the young Commander Farsight leads a crusade to reclaim colonies lost to mankind's Imperium. But stiff resistance will test him to his limits and beyond.

Listen to it because: Phil Kelly continues his look at the life of Commander Farsight with his first campaign against the full might of the Imperium and shows how the T'au Empire's technological superiority fares against Imperial grit.

The story: the t'au are a mysterious alien race, diametrically opposed to the Imperium of Man in every possible way - in their mastery of technology, methods of warfare and social structure. Yet in galactic terms they are a young race, and naïve when it comes to the manipulations of Chaos. When promising young Commander Farsight is promoted to lead a crusade across the Damocles Gulf to reclaim the T'au Empire's lost colonies from mankind, the mood is one of optimism. With their mighty fleet, and superior weapons and machines, how can their endeavour possibly fail? However, despite a parade of early successes, Commander Farsight soon faces enemies he wasn't anticipating and finds not only his courage but also his soul tested to the very limit.

What listeners say about Crisis of Faith

Very good introduction to the Tau race. Tau are the newest race in the 40k universe. They are very expansionist, masters of diplomacy and deceit, you get the impression they would rather expand the empire without firing a shot, winning "hearts and minds/propaganda".

The Tau cast system is very interesting, they view war as a means to an ends. The Tau "firecast"(warrior class) study the art of war more as a science and dogmatic in approach but follow the rules and tactics literally by the book. mathematical and statistical in their approach to warfare. The Tau class system really aren't keen on outside the box thinking and view off the cuff tactics as borderline insubordination, that will get you pushished, even if you got the desired results.... The other Tau casts view the firecast's with suspicion and trepidation, probably because they don't want firecast Tau to get any ideas above there station.

I really got an eastern/Japanese feel to this Xenos race, espeshally in the battlesuits and the feel for technology, they seem very 'manga'. The narration was really good. Would recommend!