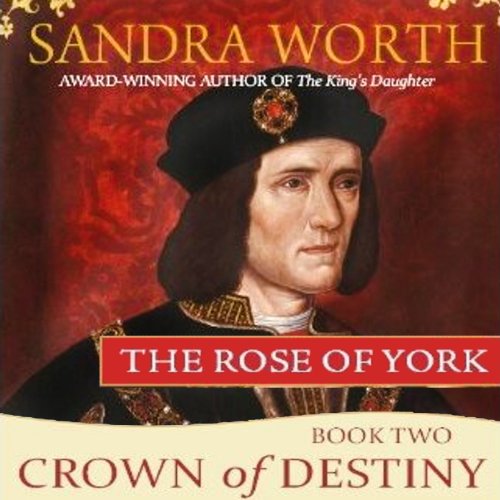 Sandra Worth's Crown of Destiny, her second novel in a trilogy about Richard III, picks up shortly after the first book's conclusion, with Richard finally wed and attempting to safeguard his new family from the machinations of his brother Edward IV's court. This is a fast listen, but one that never lags. Richard grows in this unusual portrayal of a humane man in an inhumane time, one who must confront challenging choices that threaten to rend his world apart, and contend with the own darkness in his own nature. It also paves the way for the third and final book in the trilogy.

Once again, Ms. Worth succeeds in bringing to life the tumultuous era of the last of the Plantagenets, as well as offering a different interpretation of a much-maligned historical figure, one that compliments the canon rather than detracts from it. In particular, Richard's love for Anne and his hopes for England are poignantly rendered, while the obvious meticulous research never intrudes on the narrative. A moving listening experience for all lovers of historical fiction, this book deserves its place on the shelf beside the other illustrious authors who have undertaken the difficult task of elevating Richard from the myths surrounding him.

What listeners say about Crown of Destiny

I simply loved all three volumes of Sandra Worth's trilogy, of which this is the second. Being a great reader of historical fiction, I am not easy to please at this point. However I found Sandra Worth's account of Richard III, the workings of his heart and mind, all the terrible pressures to which he was subjected by a political climate of constant intrigue and betrayal, and the decisions he made in the face of those pressures, to make a riveting listen, particularly as narrated by Robin Sachs. I will certainly never look at Richard III the same way again-- and having finished the trilogy I am somewhat stunned to find that in fact I feel as if during all the hours of listening to these three books, I actually lived through the 1470's and 1480's with Richard and Anne. Bottom line: Sandra Worth is a marvelous writer, Robin Sachs is a terrific narrator, and the entire trilogy is a wonderful listen !

As a fan of historical fiction I was able to finish this series of novels. The historical accuracy was interesting and captivating. I enjoyed it, however the narrator was a little slow and I hard time concentrating sometimes because of the voice.

Even though I don't subscribe to the attitude of "Woodvilles=evil", just as with Richard, I believe the truth lies in the middle ground somewhere, I have found this series to be entertaining and well written. It moves quickly enough to keep my attention, and that's what I want in a book. Mr. Sachs does a wonderful job of narration. I've started on the final Book and can't wait to see how the princes in the Tower and Richard's alleged affair with Elizabeth of York is handled.

I am enjoying this re telling of history from Richard's perspective and with this particular slant. I know history portrays Richard as the ultimate villain, but I always enjoy hearing these stories from the "what if..." perspective. Great performance, wonderful story to ponder.

too much info left out

story is good and keeps your attention but ends leaving you feeling like what happened? the story isn't over! leaves out his early life and end of his life after he becomes king which are some of the most interesting parts. barely touches on the prince's in the tower