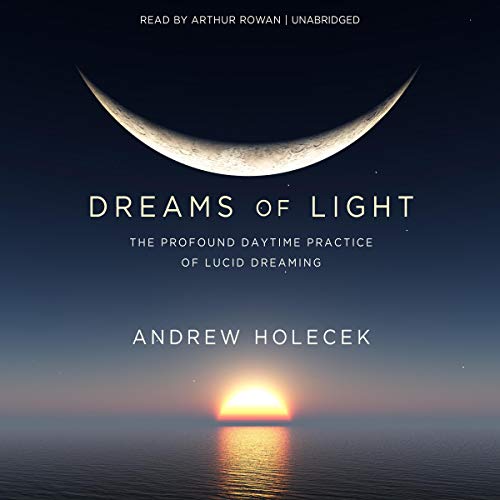 A world-renowned expert in lucid dreaming and Tibetan dream yoga guides us into the tradition’s daytime practices, a complement to the nighttime practices taught in his previous offering Dream Yoga.

Most of us are absolutely certain that we’re awake here and now - it’s a given, right? Yet, according to Tibet’s dream yoga tradition, ordinary waking life is no more real than the illusions of our nightly dreams.

In his previous offering Dream Yoga, Andrew Holecek guided us into Tibetan Buddhism’s nocturnal path of lucid dreaming and other dimensions of sleeping consciousness. Now, with Dreams of Light, he offers us an in-depth, step-by-step guide to its daytime practices.

Known as the “illusory form” practices, these teachings include insights, meditations, and actions to help us realize the dreamlike nature of our lives. Through an immersive exploration of the tradition, beginners and seasoned practitioners alike will learn everything they need to deeply transform both their sleeping and waking hours.

“If you’ve struggled to awaken in your dreams”, teaches Holecek, “these techniques will often spark spontaneous lucidity during sleep. And if you’re already a successful lucid dreamer, they will open you to new depths of experience throughout your day.”

For those wishing to explore Tibetan Buddhism’s profound path for awakening to the true nature of reality - day or night - Dreams of Light shows us the way.

“Andrew Holecek is a master of the dream yogas and lucidity practices, and I have learned more from his writings than from the many related books I have studied. I highly recommend his new work, Dreams of Light, and all his other books as well.” (Roger Walsh, MD, PhD, University of California professor and author of Essential Spirituality: The Seven Central Practices to Awaken Heart and Mind)

“Dreams of Light is a profound exploration of emptiness, illusion, and the clear-light mind. Andrew’s deep scholarly knowledge, poetic prose, and compassionate heart illuminate every page of this fascinating book. Dreams of Light will raise your awareness and bring lucidity into every part of your life.” (Clare Johnson, PhD, author of Llewellyn’s Complete Book of Lucid Dreaming)

“This is an important and very pragmatic book for bringing daytime practices into the realm of lucid dreaming. Holecek isn’t just a writer; he has expertly walked the path himself. Through the apt use of metaphor and clear examples, Holecek’s wisdom shines forth as he gives useful instructions for the reader to follow in his footsteps. I enjoyed this book immensely.” (Judson Brewer, MD, PhD, author of The Craving Mind: From Cigarettes to Smartphones to Love - Why We Get Hooked and How We Can Break Bad Habits)

What listeners say about Dreams of Light

The book shows us our true self. It is as essence of all religions teachings with pure scientific approach

Lucid Lucid World ou there and in here

Highly enjoyable, but how useful is it actually to spiritual practice?

This book provides insight into many aspects of Tibetan Buddhism, and serves as an excellent introduction to a late Buddhist conception of the mind, emptiness, the dream like qualities of waking experience, etc. It is in some ways comparable to Donald Hoffman’s book «The Case Against Reality», but the scope is broader, and it is more practice oriented. Unlike a large number of western spiritual teachers, Holocek does not seem to import what to a Buddhist is reification-errors of Advaita into his views, even though he quotes masters of Advaita such as Ramana Mahirshi and sri Nisargadatta Maharaj.

If you are into questioning the solidity of reality, and enjoy mind bending challenges to your worldview, you might find this book as enjoyable as I did. I guess it might also be useful to someone who clings very deeply to naive realism and a view of the world as solid and «real», and where this clinging has become an obstacle to further spiritual progress.

As a manual for general spiritual practice, I am not sure how useful it actually is, at least if the goal is what in the early Buddhist texts is called «nibbana», the extinguishment of greed, hatred and delusion
through non-clinging, resulting in liberation from the cycle of suffering.

There is a story in the early Buddhist texts about the Buddha walking through a forest, and picking up a handful of leaves. He compared the leaves in his hand to what he had taught his disciples, and the rest of the leaves in the forest to the rest of his knowledge, presumably acquired through his awakening. He only taught what was necessary for liberation. Early Buddhism was very pragmatic, and the Buddha is portrayed as someone who avoided all kinds of philosophical debates and topics unless they were of benefit on the path to liberation. He never painted a complete picture of reality or the human mind. That is not what the teaching was for.

So one of our fundamental problems according to the Buddha was clinging. Addiction. Not being able to let go of what is impermanent and ultimately unsatisfactory. The Buddha taught a path to the end of such clinging through ethical precepts, which calm and gladden the mind, enabling deep meditative states. These states result in mental pleasures far surpassing anything worldly experience has to offer, including sex, and combined with right view they provide direct insight into the unsatisfactory, impermanent and not-self nature of the five experiential bundles we usually misinterpret as being me, mine, my self, culminating in release from bondage.

But the aim was not some vast knowledge about the true nature of reality, the mind, emptiness or even a doctrine of no-self. All the teachings of the Buddha were a means to an end, and that end was the total letting go of everything that keeps us returning to this world of misery and suffering in life after life. Are the practices in this book really helpful in that regard?

Let us say that I am addicted to chocolate: I NEED to have at least one bar every day. I crave the taste, the sensation, the experience of eating the chocolate. Let us say it creates health problems such as obesity and type 2 diabetes. How does it help me to know that the chocolate is «empty of inherent existence»? Is the reason for my addiction truly that I believe the chocolate is «real», whatever that means? Would I really be able to immediately stop craving it once the experience of eating it could be given a different label such as «dreamlike»? I don’t think so.

Or take sex addiction. Could a sex addict be liberated from strong lust by knowing that the people having sex are all part of the dream, that the experience of sex isn’t «real» or that it is illusory? Hardly. Someone who watches porn on a screen, or even puts on a pair of VR-goggles to simulate sex knows perfectly well that it isn’t real, and that doesn’t matter. In fact, a strong motivating factor for some people to have lucid dreams is having free access to sex in the dream world! So much for getting rid of clinging through «dream yoga».

One final note on the use of drugs. The Buddha cautioned against taking intoxicants. It is one of the five basic precepts for lay Buddhists (monastics have many more), which are necessary in order to cultivate the kind of mind that can enter deep meditative states. The author speaks highly of psychedelics because they can sometimes shut down parts of the mind which we take to be a self while consciousness remains.

First, I should note that these drugs can do far more than that, such as sending you into a psychosis you may never be able to leave, thus trapping you in a nightmare for the rest of your life, creating tremendous suffering for yourself and those who love you. I have witnessed a close friend go insane and eventually DIE because he took a drug like that. It is NOT worth the risk.

Second, turning off a few of the mental processes you take to be a self is of very limited spiritual value, and does not compare to an actual realization of emptiness/not-self. Instead it may keep you chasing such states for decades thinking that this is what enlightment is like. It isn’t. Enlightement removes nothing from your experience. Whatever you take to be a self now will still be there when you are enlightened.

But when you actually realize not-self, what you see is that all the aspects of your mental/physical world which you take to be «me, mine, my self», which now FEEL like they are «me, mine, my self» are NOT so, COULD not be so, and have NEVER been so. EVER. In ANY mental state, meditative or otherwise. You see it directly, unequivocally, and without relying on discursive thought. Once you have seen this, you can never unsee it. It will become the new baseline of your experience, and while you will know that you used to habitually misinterpret experience, you will no longer be able to relive what it was like, because that would mean simulating a delusion that no longer traps your mind.

No drug will give you that realization, but taking up the practice of the noble eightfold path just might :)

Who hired the reader??

I’ve hear hundreds of audible books, this reader was the disagreeable. His narration completely ruined the book!!!!

This book is profound and touches on almost everything we encounter on the spiritual journey. Andrew also does his best to break down some complex issues into simple day to day personal experiences. I loved Dream Yoga by Andrew Holecek and i love Dreams of Light

The treasure trove companion to Dream Yoga, this book provides daytime practice to carry lucidity into/out of sleep and dreams.

with excellent and diverse quotes to open each section.

I love everything about this book. I’ve never heard emptiness explained so well. Thank you.

This book was so satisfying to listen to. With a range of concepts for contemplation, he is weaving science and spiritual traditions and is able to lead the listener into a seeker’s territory. So rich, I will listen to this many times.

Another meditation teacher acting like they are Enlightened when the clearly are not. Every meditation instructor who doesn't understand neuroscience will never know what awakening is.

Perhaps the best treatese upon enlightenment yet.

An extraordinary effort in detailing the process of waking up to our dreams and the extent to which we dream ourselves into a so called "reality" moment to moment.

My favourite narrator narrating one of the bost profound books I've listened to. Thankyou! 😁👊

Amazing Eyes, Mind & Heart insights opening book! It should be read and re-read by all mankind! 🧡🌞🔥