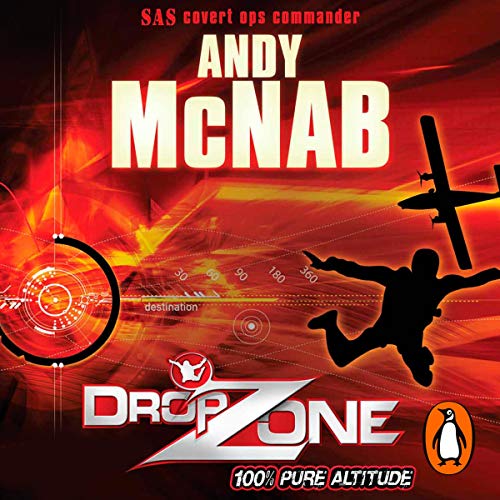 Ethan Blake is seventeen and desperate to escape from his dead-end life. When he sees someone B.A.S.E. jump from the top of his block of flats, it changes the way he sees the world for ever.

Soon, Ethan is caught up in the adrenaline-fuelled world of skydiving. He's a natural, so it's no surprise when he's invited to join an elite skydive team, but is he signing up for more than just jumping out of planes?

The team's involved in covert military operations - missions that require a special kind of guts, missions so secret even MI5 denies all knowledge.

On the edge of your seat listening even 8 year old daughter was totally into listening to it even after reaching our destination. Very real, and realistic. Will be listening to more Andy McNab.

Fantastic, on to the next

After debating with myself on whether to read this book or not I am so glad I went with my gut, knowing how good Andy Mcnab is at the detailed stories he did not let me down on this one. I was gripped from the beginning and loved learning about Ethan, his struggles and obviously about sky diving. I REALLY WANNA SKY DIVE NOW.

Is this really written by Andy McNab?

What disappointed you about DropZone?

Totally unbelievable story line that bordered on the ridiculous. As a lifelong fan of the author it was in massive contrast to the usual brilliance.

What could Andy McNab have done to make this a more enjoyable book for you?

Not written or published it at all.

Who might you have cast as narrator instead of Nigel Pilkington?

I cant see Paul Thornley or any of the excellent narrators of his previous books going anywhere near it.

This book has no redeeming qualities at all.

Still absolutely love Andy McNab as an author, and cant wait for his next book to be released.

What an amazing Young Adult book!

This book is aimed at younger readers (High School / College etc) but as I like McNabs writing skills I thought I would give this a try.

Keeping in mind it is aimed at younger listeners, it was well written, a bit cheesy and sometimes predictable but well worth a listen.

This is NOT like Bravo Two Zero or Zero Hour but I just could not stop listening to it. As it is lighter than his other works I just found myself wanting to listen to more of it, I could remember being that age and associating with some of the things that the lead character Ethan was up against.

Remember this book is aimed at younger readers before they come into the more adult works that McNab writes!

Dissapointing to say the least

As a previous fan of McNab I have difficulty avoiding being rude about McNab's foray into what can only have been written as a children?s story ? is this the same Andy McMab that wrote Seven Troop - no can't be? I can only assume that McNab?s publisher felt that his books were becoming too samey and suggested he go in a different direction. Thus here you have the author trying to become a teenager with the most improbable script you have ever read. To achieve this miracle the word AWSOME DUDE graces just about every page along with the blushes when the girls look at you and going home to talk to Mum about how rotten everybody is being to you - I kid you not. The plot frankly beggars belief. Here?s a kid who's taking his A levels i.e. a minor being recruited by MI5 (wonders whether he should go home and ask Mum if it?s OK to go on covert ops this week ? literally)without being told that he was actually working for MI5 before the plane took off. I really don?t know what you were thinking about Andy and maybe I should have realised that this was actually a children?s book but I didn?t know that Andy McNab would one day write ?Noddy (sorry - Ethan) learns to Skydive with MI5 and big scary people are rotten to him?.