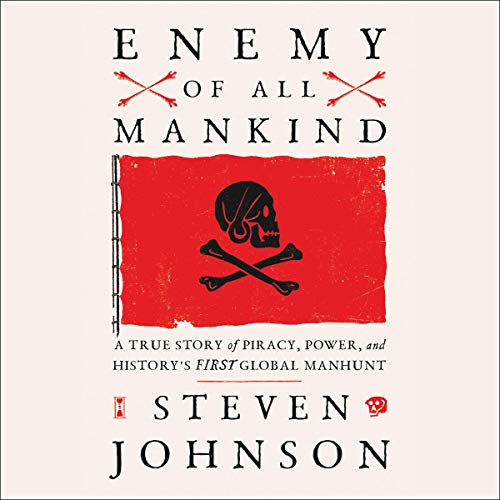 From the New York Times best-selling author of The Ghost Map and Unexpected Life, the story of a pirate who changed the world.

Henry Every was the 17th century’s most notorious pirate. The press published wildly popular - and wildly inaccurate - reports of his nefarious adventures. The British government offered enormous bounties for his capture, alive or (preferably) dead. But Steven Johnson argues that Every’s most lasting legacy was his inadvertent triggering of a major shift in the global economy. Enemy of All Mankind focuses on one key event - the attack on an Indian treasure ship by Every and his crew - and its surprising repercussions across time and space. It’s the gripping tale of one of the most lucrative crimes in history, the first international manhunt, and the trial of the 17th century.

Johnson uses the extraordinary story of Henry Every and his crimes to explore the emergence of the East India Company, the British Empire, and the modern global marketplace: a densely interconnected planet ruled by nations and corporations. How did this unlikely pirate and his notorious crime end up playing a key role in the birth of multinational capitalism? In the same mode as Johnson’s classic nonfiction historical thriller The Ghost Map, Enemy of All Mankind deftly traces the path from a single struck match to a global conflagration.

What listeners say about Enemy of All Mankind

Pirates and the stock market

Promotion promises swashbuckling. This book is more a study of piracy's effect on world trade.

I found the story to be very slow and boring. I only made it through chapter 7 before finally giving up.

Amazing story that includes quite a bit of fascinating history from the period to provide background to the events.

This isn't a book, it is just random content. There are chapters about early muslim subjugation of India and cotton cloth manufacture and the Taj Mahal. In the first half of the book, the only mention of pirates is about Barbary raiders. Guess what, that's not what I bought the book for. There's very little about piracy, trade with the east, maritime history or exploration. Nothing of any depth is provided on any of those subjects. A review says the book is "a tapestry that links events and subjects most of us wouldn’t see as related" and I often like that type of book but, this book is so pointless that I keep thinking that the narrator is just reading random wikipedia articles.

A comprehensive narrative which greatly clarified the role of piracy in the 17th century. The narration was excellent and extolled the various events with clarity and comprehension.

A pirate story and media-hidden rape

Great story! well-researched by the author and well-read for audible!
perhaps the "global manhunt" is over-played since little evidence is presented. but great history and speculation on possible linkages to grander sweeps of historical events and developments.

I enjoyed the story. I thought the performance was dull, especially for a pirate adventure. Johnson rarely disappoints. This is not his best book but I enjoyed it.

what an incredible story!

Dont hesitate to buy this book. it was amazing, thought provoking, and a great adventure.

Lots of cool facts and interesting conjecture.
Love the conclusion drawn on the East India Trading Company, and the British Empire. Though the story line meandered around and was overlong in drawing those conclusions. It could and should have been edited down a couple of chapters.

Pirates lead us to freedom

This book captures an inflection point in history in which the common man in Europe is shown a new system of governance and the possibility of rapid upward class movement. It cuts through our imagination as sharply as the frigate Fancy cut through 17th century waves!

I’m fascinated by the subject and this period of history. However, the production value of this audiobook was such a turn off. It was poorly cast and the edit is awful - the voice is tinny, disjointed and there are at least four points where there is a sudden drop out mid sentence and clearly missing text. A cheap and rushed job for a major publisher.

This is a rather typical tale. Men mutiny, seize a ship, go piratical, get caught, get hung.

Differences here? A big score from a non-enemy and ultimate disappearance of the leader.

So full of "we don't knows", could haves" and "will never knows", that i come away wondering wheres the beef?

This is a single event tale with 3/4 of the book as historical filler.

Johnson ought to have narrated

It would have benefited having Steven Johnson (an avid podcaster) to narrate the book yo.