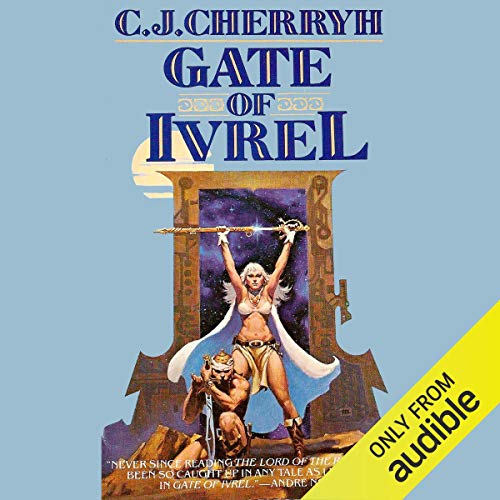 Scattered about the galaxy were the time-space Gates of a vanished but not forgotten alien race. In their time, long before the rise of the native civilizations, they had terrorized a hundred worlds—not from villainy but from folly, from tampering with the strands that held a universe together.

Now the task was to uproot these Gates, destroy their potency for mischief, take horror out of the hands of the few who hungered for power by misuse of the Gates.

This is the story of one such Gate and one such world.

What listeners say about Gate of Ivrel

I LOVE these books. This reading is terrible.

What would have made Gate of Ivrel better?

I seldom leave a negative review for anything. I've never left one for an audiobook performance. What made this one almost unendurable was the embarrassing lack of familiarity with the English language the reader displayed. If your job is to read a book for an audio recording, you should really make certain your pronunciation of unfamiliar words is correct. "Obeisance," for instance, and "incredulity" come to mind as examples.

I approve of strong female characters. The effect was somewhat spoiled by the reader's simpering, silly portrayal of Morgaine.

A narrator with a stronger voice and a better command of the language would have been a much better choice.

I will READ the rest myself

Would you try another book from C.J. Cherryh and/or Jessica Almasy?

I love C.J. Cherryh's books! and I would not ever listen to Jessica Almasy again.

If you’ve listened to books by C.J. Cherryh before, how does this one compare?

Terrible choice of performers. For any book. Sorry, but she needs to get a different line of work.

Too fast, too high a voice, sounds like a kid.

Hard to tell if I could love this book. I'm going to push through the entire listening of it, BUT, I do know that I will READ the rest, not listen to Jessica Almasy

I've loved the book series for AGES and looked forward to hearing it. And it was very good except...well, I did not think Morgaine would sound like a twinkly 15 year old girl.

I hate to say this because the narrator did a pretty good job all around except that the voice for the main character was so ill fitting. A woman who does what she does would have a richer, more experienced voice. Too, sometimes the inflection was a bit off - the dialog not quite right. But the narrator DID do a great job of giving that sense of movement and pace - of growing excitement and danger. So I hate to find fault but - there is no way that Morgaine would sound that way. Sorry...

I absolutely love this series. I have been waiting impatiently for it since CJ Cherryh's books finally became available. Vanye and Morgaine's story is one that has been with me as a true friend for 20 years.

What was one of the most memorable moments of Gate of Ivrel?

I love Vanye's character, which as a far cry from the stereotypical heroes that we encounter in so much of today's fantasy writing.

The narrator read the story as if she was on speed. She read so quickly that all of the nuances of speech and rhythm that go along with good writing were completely lost. I even tried to listen to it at 75% speed, but the after echo that goes along with it was too distracting. I am very sad that the editors chose to go with a female narrator for a book that is told from a male viewpoint, and then to make matters worse by allowing her to ruin to beauty of the story with her choice of pace. I'm even more disappointing that she is reading all of the books in the series.

What would have made Gate of Ivrel better?

This series has always been a favorite, so I was glad to see it come out in audio. Unfortunately, the narrator is the WORST ever. She reads SO fast it's extremely difficult to listen to and understand what she is saying. Additionally, the story is told from a male's point of view so why a female narrator? How disappointing and heartbreaking that Ms Almasy narrates the entire series. I WILL be asking for my credit back.

Have waited a long time for this!

Would you consider the audio edition of Gate of Ivrel to be better than the print version?

No. While the audio edition is excellent, the voice of the reader isn't quite what is needed, although she did a good job.

What other book might you compare Gate of Ivrel to and why?

Jennifer Roberson's Sword Dancer books. Both are about a strong woman with a mission she would trade all to accomplish

Did Jessica Almasy do a good job differentiating all the characters? How?

Yes she did. Different voices were obvious for different characters.

Yes and no. I've waited so long for these books that I sort of doled them out to myself.

Loved the books from years and years ago. Truly hate the choice of reader. Threw the discs out.

Now I know what a overly involved author and a overly dramatic reader sound like.

The Book of Morgaine is an all-time favorite. I was excited to see the audiobooks, but the narrator isn't exactly right for Vanye or Morgaine... too girlish and breathy. Also she speaks so fast that it's distracting from the story. I slowed down the narration to .8 speed which really helped.

Mispronunciatons and too fast reading made this book hard to listen to. Read it instead.