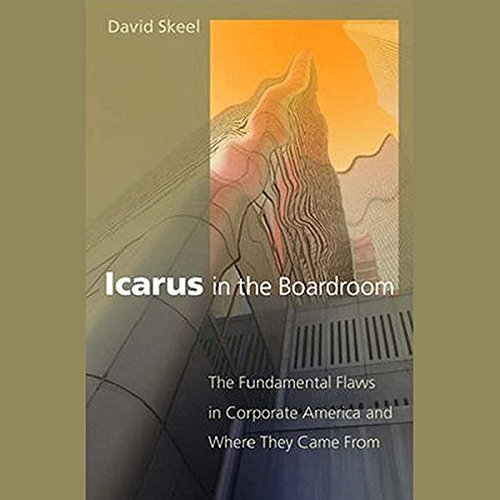 Icarus in the Boardroom

The Fundamental Flaws in Corporate America and Where They Came From
Written by: David Skeel
Narrated by: Paul Boehmer
Length: 8 hrs and 8 mins
Categories: Business & Money, Management

Americans have always loved risktakers. Like the Icarus of ancient Greek lore, however, even the most talented entrepreneurs can overstep their bounds. All too often, the very qualities that make Icaran executives special - self-confidence, visionary insight, and extreme competitiveness - spur them to take misguided and even illegal chances.

Ever since the first large-scale corporations emerged in the 19th century, their ability to tap huge amounts of capital and the sheer number of lives they affect has meant that their executives play for far greater stakes. Excessive and sometimes fraudulent risks, competition, and the increasing size and complexity of organizations: these three factors have been at the heart of every corporate breakdown from 1873, when financial genius Jay Cooke collapsed, to the corporate scandals of the early 21st century. Compounding the scandals is an ongoing cat-and-mouse game between regulators' efforts to police the three factors that lead to Icarus Effect failures and efforts by corporate America to evade this regulation in the name of efficiency and flexibility.These efforts to side-step oversight can rapidly spiral out of control, setting the stage for the devastating corporate failures that punctuate American business history. But there is also a silver lining to the stunning failures: the outrage they provoke galvanizes public opinion in favor of corporate reform. The most important American business regulation has always been enacted in response to a major breakdown in corporate America.

Today's business environment poses unprecedented perils for the average American as for the first time ever, more than half of Americans now own stock. Identifying the problems of the past, Skeel offers a strikingly new diagnosis of the fundamental flaws in corporate America today, and of what can be done to fix them.

This is a favorite genre of mine (when well done): the large-canvas history of business firms, their structure and financing, their experiments and excesses, strengths and weaknesses (and key personalities) through the challenges of time and shifting environments. Here we follow the tendency of corporate leaders in various times to take high-flying "Icaran" risks, rolling the dice on the fortunes of their companies (and of the various stakeholders), for personal glory or riches or various other motives, mixing with counter-waves of regulation trying (in ways sometimes more enlightened or effective, sometimes less) to contain this behavior.
Samuel Insull, for example, was a corporate empire-builder of the 1920s, taking the novel complex tiering of utility holding companies to new risk-laden heights, prior to the whole structure collapsing around his ears, and the arrival of New Deal legislation tying utilities' hands. Another surge in creativity emerges with the roaring 1980's, well described here with Michael Milken's innovations at center stage. Similar time is spent with Enron. Such events are woven well in this book into larger historical contexts. Whether the reader agrees with the authors' biases or not, there is plenty of factual content here to chew on. The book ends with the arrival of Sarbanes-Oxley, i.e., post-2000 but before the biggest runups of the subprime fiasco and 2008. I would like to see an update along these lines from the author, noting there is an audible book by him on 2010's Dodd-Frank legislation I rated highly.