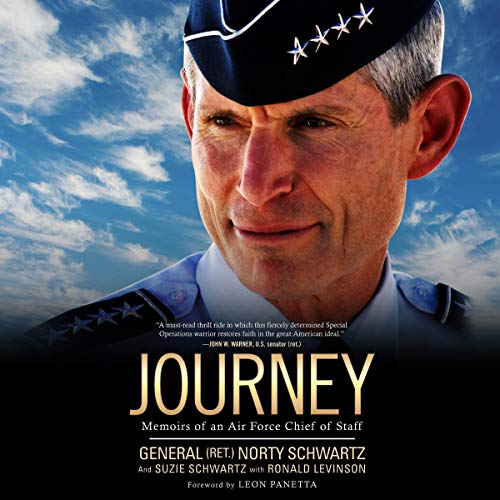 The General’s dysfunctional home life drove him to apply to the Air Force Academy almost 40 years ago, where he was provided with a new family and sense of worth he had never gotten from his own father. This purpose has driven the General throughout his remarkable career, taking him to Alaska, the Pentagon, and Germany; to Florida during Hurricane Opal, and has also allowed him to work alongside Presidents Bush and Obama and Secretaries of Defense Leon Panetta and Ashton Carter.

Journey is a book about leadership. It is packed with the General’s lessons from life in the military: breaking the mold, flying uncharted airspace, battles from Iraq to the Pentagon, Afghanistan to Congress. It’s about pushing limits in an era of diminishing budgets and fewer resources to fuel the furnace of innovation. He chronicles the phenomenal story of the evolution of the US special operations, such as what was achieved when taking down Bin Laden. The General discusses the controversial new technologies that have been allowing America to build new capabilities in cyber warfare. Many believe General Schwartz’s greatest legacy will be the dramatic escalation of the drone program. He is a staunch advocate for it and this book will explain why.

What listeners say about Journey

This Review Needs A Title...So, I Gave it One

The book kept my interest because I worked for the guy. Throughout,, he deals with persons who have shown the way or demonstrated something that he learned, including Suzie, his wife. Good perspective. The memoirs treated every section of his professional life at a very high level, even his time as CSAF. That was disappointing. For example, the description of his time at USTRANSCOM was superficial--part of it dealt with finding Scott AFB in the corn fields, a typical Washington DC view; part of it dealt with relationships with the POTUS and the rest was a summary of the mission statement and volume statistics. Memorable people? Lessons? On the positive side, throughout the book, he named people who have been impactful in his career as well as mistakes he made and the lessons learned from them. That demonstrated for me -- charisma and trust can overcome mistakes--but, from the book, he certainly made a lot of faux pas'. I thought that the second to last chapter was distracting. It was a sales pitch for current Air Force systems and programs; which will wane over time and detracts from the book's purpose--a leadership read.

i loved it! should be read by all young Americans planning to join the Air Force, the book encourages to do that and gives much motivation for hard work. i totally recommend to all!

A fantastic book that I found to be developmental and maturative for a young man coming of age such as myself. I found this book to be relatable and generally well written. I further highly recommend this book.