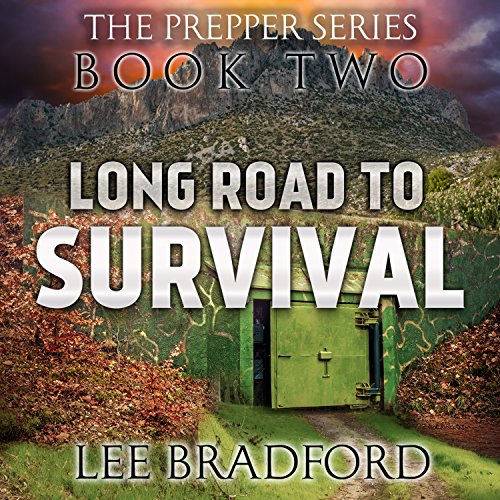 America continues to teeter on the brink of collapse after terrorists detonate black-market nukes from container ships.

With deadly clouds of radiation swooping in from the wasteland of American port cities, Paul Edwards and his father-in-law, Buck, seek shelter in a spectacular government bunker, the likes of which has never been seen.

They've succeeded in finding safety from the dangers outside, but in a world without rules, trust can be a deadly thing.

This is book 2 of a series of 2. 1st time I have listened to a book from this author and I am very impressed. I look forward to listening to more of his books. This was an exciting to books regarding hell we can be fooled into being careful and giving up our rights as citizens. I must read for all true blue Americans who love this country.

The story in this two book series is frightening plausible. A unique spin of a post-apocalyptic story. The focus is more on the characters, their surroundings and a conspiracy. The typical prepper story focuses on depth on weaponry Etc. this book has not done that, giving it a fresh perspective of an apocalypse. The narrator gave an impressive performance. I highly recommend this book to those who enjoy this genre.

I enjoyed this book!

Totally believable characters Buck was on my last nerve but I did like him!! Ending was ok over all I liked it and would recommend it to any dystopian lover!

not a prepper book

I wanted a survival book about living this is not its about government conspiracy.

WARMING: NOT a prepper book.

Okay, this is an okay book with an okay story (the characters aren't very deep, but the topic is interesting). However, there are no prepper skills, ideals, etc... discussed. Sure it's a continuation of book one, and a post SHTF seeing, but there is none of the substance most peppers are looking to find in these books. Worse, it is very short (less than 5hrs if I recall correctly) so you get very little for your money/credit to begin with. Frankly, I want my credit back so I don't have to wait until Nov (it's Oct 5th as I write this, fyi) for another book.

The book took on a different twist with the bunker and I thought it dragged at times. The ending was melodrama and it sounded like they just wanted to get done with it. The first book was better in my opinion.

The book wasn't what I expected. It was more government corruption and intrigue verses action. I was surprised to find that I enjoyed it anyway and am starting the sequel. Just be prepared for a different spin than most of the apocalypse books on the market.

Would you try another book from Lee Bradford and William H. Weber and/or Johnny Heller?

The authors went way out on this one, too far into never, never land.

Has Long Road to Survival turned you off from other books in this genre?

I normally like SHTF books but this story was odd and slow and lacked the characters, circumstances and environment to keep my interest.

Narrator Johnny Heller did a good job, but the plot was just fair at best.

Loved this series but hated the ending what a horrible thing to do.

Characters were great liked the twists.

Narrator was good though sometime felt drowsy from his tone