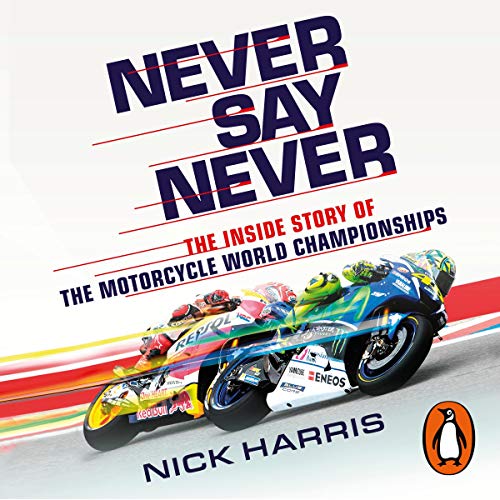 As 'The Voice' of motorcycle racing for 40 years, commentator Nick Harris became the biggest star not on two wheels in the paddock, and this is his mostly eyewitness, white-knuckle account of MotoGP's scorching 70-year history.

The story starts on the Isle of Man in 1949, when Geoff Duke, with his slicked-back hair and one-piece black leathers, became the nation's hero, defying the odds and winning the most dangerous race in the world on a British-built Norton. Just over a decade later at Mallory Park, another British champion and one of the greatest riders of all time, Mike Hailwood, screamed past a young Nick Harris on his 250cc Honda, and a lifelong passion was born.

Harris has been at the centre of the sport for decades, getting to know the riders as individuals, seeings feuds unfold, champions made, careers and sometimes lives ended. We'll see the biggest podium stars up close, from Barry Sheene and Kenny Roberts to Valentino Rossi, and we'll meet the mechanics behind them, the manufacturers who poured millions into the teams and the organisers who, in the early days, ruthlessly compromised rider safety for profits. The drama has often been as tense off the track as on it.

This is the book the motorcycling world has been waiting for.

What a great listen

Always followed moto gp and I found this book to be probably the best listen out of all the AB's and books on the subject.
Full of interesting history and provides a unique perspective from someone that's been heavily involved in the sport for decades.
Well worth a listen , would definitely recommend

Great audio book spoken very well by the author which is the only way it should be. Really enjoyed some of the stories of the biking heroes. Nick has had an amazing career and life so this is a must listen for any racing fan.

Wonderful insight into several decades of grand prix motorcycle racing (and a brief departure into F1) from a genuine expert and (equally importantly) enthusiast in the field. Factual, funny, moving and entertaining - a great listen for fans of motorsport.

I had to stop listening

I’m a huge fan of all things motorsport and familiar with Nick Harris’. However after so long I couldn’t listen any more. Just constantly reading out race results, it was like listening to a timekeepers diary. Barely any information other than that. A brief description of getting into the job role and then just drawling on about race results. I can read these for myself on Wikipedia. Sorely disappointed.

Excellent combination of racing stats and experiences of happenings on and also off the track.

Loved every minute of listening to Nick talk about the championship, champions, legends and his experiences over the years. Absolutely super 👍👍👍

Just love Nick Harris. Have been following the MotoGp since 1999, so it's a pleasure to listen to Nick telling all these behind the scenes storys. Nick is presenting his story with such a passion, you can only love him.

Way too many statistics and not so much a story about the authors travels and what he has experienced in his looong career! I learned some stuff about the riders before my time (the 90s), but ended up being way too boring for me!

a detailed and informative book

great book , packed with interesting
stories and lots of information on a fantastic sport.

Nick Harris will forever be, the voice of Moto GP

I really enjoyed this chronological audio book, narrated by the man himself, Nick Harris. I'm glad that he brought out a book, and I will always miss listening to his voice commentating the Moto GP

Simply Brillant, a must Listen or read for any MotoGP fan, even though I am a Rossi fan I can appreciate that no sides are taken in this truly fantastic history of MotoGP.

I was a Nick Harris fan before this book. He's knowledge and history of the sport is second to none. A must for any Motogp fan or just casual observer

Not sure whether I was expecting too much but I did find the predominantly chronological nature of this book a little bit boring at times. Still some great stories and memories, worth a listen.