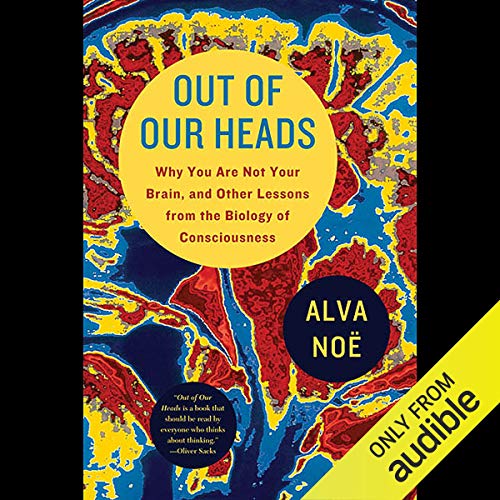 Out of Our Heads

You Are Not Your Brain, and Other Lessons from the Biology of Consciousness
Written by: Alva Noe
Narrated by: Jay Snyder
Length: 6 hrs and 54 mins
Categories: Science & Math, Psychology & The Mind

Alva Noë is one of a new breed - part philosopher, part cognitive scientist, part neuroscientist - who are radically altering the study of consciousness by asking difficult questions and pointing out obvious flaws in the current science. In Out of Our Heads, he restates and reexamines the problem of consciousness, and then proposes a startling solution: Do away with the 200-year-old paradigm that places consciousness within the confines of the brain. Our culture is obsessed with the brain - how it perceives; how it remembers; how it determines our intelligence, our morality, our likes and our dislikes. It's widely believed that consciousness itself, that Holy Grail of science and philosophy, will soon be given a neural explanation. And yet, after decades of research, only one proposition about how the brain makes us conscious - how it gives rise to sensation, feeling, and subjectivity - has emerged unchallenged: We don't have a clue.

In this inventive work, Noë suggests that rather than being something that happens inside us, consciousness is something we do. Debunking an outmoded philosophy that holds the scientific study of consciousness captive, Out of Our Heads is a fresh attempt at understanding our minds and how we interact with the world around us.

"Readers interested in how science can intersect with and profit from philosophy will find much food for thought in Noë's groundbreaking study." ( Publishers Weekly)
"[A]n invaluable contribution to cognitive science and the branch of self-reflective philosophy extending back to Descartes' famous maxim, 'I think, therefore I am.'" ( Booklist)

A bold, yet ultimately unsupported, hypothesis

A well-written, well narrated tome with an ambitious agenda, Out of Our Heads proposes a new "astonishing hypothesis" but falls well short of supporting it. The author explores a number of compelling and, in and of themselves, very worthwhile avenues of cognition research. Yet positioning these studies as evidence in support of his central claim is, in nearly every case, a highly dubious proposition, with most actually being non-sequiturs. Perhaps the theory of innate brain modules (for language, or faces, for instance) is, as the author contends, false. So what? Transposing this (potential) condition to the proposed consequent requires a logic that, despite several attempts, defies discovery. Worse, the author, in one instance, grossly overstates the rigidity and ambition of what he posits to be a competing hypothesis, then knocks down this straw man with embarrassing gusto. Few if any serious researchers claim that all physical reality is just an illusion, literally a construction of the human mind. Yet Noe confidently describe their positions thusly, an inaccurate and unjust simplification/distortion that should be called out. Finally, if the author wishes our assent, he really must stop using, with nauseating repetitiveness, rhetorically-nonsensical catch-phrases he apparently believes to be colloquialisms. Specifically, if I ever read or hear "the world shows up for us" again, I will simply scream. The narrator must have been, in the end, gouging out his eyes at seeing yet ANOTHER appearance of this babblephrase.
All that said, I gave this book 4 stars and mildly recommend it. Much of the content is devoted to fascinating and well-crafted accounts of a variety of brain phenomena and research, and those I thoroughly enjoyed.

The basic premise is that consciousness is not located in the brain but that it is something we do. No scientific proof is given, only philosophical logic that goes something like this: unless you actually eat something, your digestive system is useless - it just sits there. Digestion is something you do, not something in your stomache. Your stomache is useless unless it gets inputs from the environment, therefore digestion doesn't happen inside you but in the environment, therefore, consciousness isn't in your brain, therefore God doesn't exist and we are all fools if we think otherwise. If I'm oversimplifying his arguements, then tit for tat. He thinks he can debunk nobel prize winners with this kind of superficial non-scientific thinking.

this is a very poorly written and depressing book. the tone of voice is drawling and monoton. the stories and conclusions make the reader feel bad and make no sense at all. total garbage.

I enjoyed the concept that this book was working to attain, that there is an indistinguishable connection between the mind, the body, and the environment. However, while the author spend much time denying several precepts that the Mind cannot work alone and that the mind cannot be in a world of Grand Illusion, I believe he failed to offer sufficient rationale as to precisely why these cannot be the case. Much like it is (currently) near impossible to prove the non existence of teacups revolving around Saturn, the authors insistence that there can be no Grand Illusion did not seem to be disproven by this reader. All that said, I did thoroughly enjoy this book and look forward to more work from this author.

Where does Out of Our Heads rank among all the audiobooks you’ve listened to so far?

I think this book is great. So far into the book, I’ve not heard anywhere specifically where Alva has blatantly set up a strawman fallacy or acting with an aggressive gusto toward the skepticism of neuroscience’s answers to the underlying basis of consciousness. His argument is from a cause within scientific discourse, regarding a material origin and basis of consciousness assumed or sought for, often, which we have no evidence for other than neural correlations of consciousness. But correlations are not causations, as everyone knows.

There is an overall cost for science to understand what has been truly defined as the ineffable, phenomenal consciousness. Alva Noe argues with clarity that this process can by no means be exclusively limited to just our brains, when we consider all the parameters within conscious experience. He gives interesting information about research conducted. I would definitely recommend this book; I am enjoying it and think the critical individuals scolding Alva for questioning "established science" as one hoffing reviewer put it, should consider their place within the underlying ideological battle of consciousness as “arising” from the brain.

I wonder if the individuals who read this blog and are henceforth perpetually vexed at the author’s comments are taking offense of his old attempts to address and challenge the scientific claim that we can understand the origins, causation, or basis of consciousness? To those of you who say it’s just “a few” who think this way, please think again. Many neuroscientists have written their theories with a neural basis of consciousness within their hypothesis, many times often assumed. For example, neuroscientists and philosophers are wide-ranging and some are militant atheists such as Daniel Dennett, and the rest are assuming or seeking consciousness as having a material, neural basis and origin unproven, Peter Tse, Christoph Koch, Crick, and Victor Lamme. They are by no means alone. Richard Dawkins is a supporter because he is also a militant atheist materialist seeking with an ideological agenda to "supplant" all other modes of knowledge, especially religious modes. A lot of misinformation exists out there.Alva is worth listening to to make you reconsider what you think of when you think of consciousness.

The author's approach throughout is to set up strawman arguments supposedly representing modern neuroscientific orthodoxy and then purporting to knock them down. The problem is that author Noe either does not understand or misrepresents most of the arguments he pretends to counter, and then fails to refute them convincingly (or often even coherently) anyway. As for positive ideas of his own on cognitive neuroscience, the author remains frustratingly vague, where not downright confused, only achieving clarity when he states the obvious.

This seemed as though it could have been such an interesting book but, alas, the author basically has nothing. Narration is pretty good, although the reader's tone does seem to accentuate the somewhat arrogant rhetorical style of the author.

Out of our heads

Good book that works the brain. Again thanks to leo laporte and audible.

Noë presents his and other people's research very clearly and makes a good case for studying consciousness in the wider context of our action in the world with others. The one downside is that the narrator consistently mispronounces 'causal' as 'casual'.

done so much better by other writers

I am having trouble finishing this book, so I know my review can be shot down in flames! In fact I'm pretty sure I'm going to return it unfinished.
Firstly its style is so convoluted and heavy going that it is boring, hard to follow and unrewarding. This isn't helped by a narrator who reads as if every sentence has an exclamation mark after it, as though the writer is forever amazed by what he has written. He uses little homely happenings or poorly described neuroscience experiments and then builds on them far in excess of what they can actually support - he just sort of riffs off, with no care whether the starting point actually justifies his conclusions.

Closely related is that the substance is nonsense - not wrong, just obvious and years out of date. No-one nowadays is suggesting that consciousness is exactly caused by and is the same as brain states.

I did wonder whether I had completely missed the point - I'm not a professional neuroscientist or philosopher - I'm a psychiatrist with a keen interest in consciousness/mind body problem etc. However, having read authors such as Daniel Dennett (Consciousness explained) and Mind, Meaning and Mental Disorder (Bolton and Hill) provide such rigorous, closely reasoned and ultimately much more readable/listenable works on similar topics, I don't think I have missed the point. Another couple of reviews seem to closely mirror my conclusions.