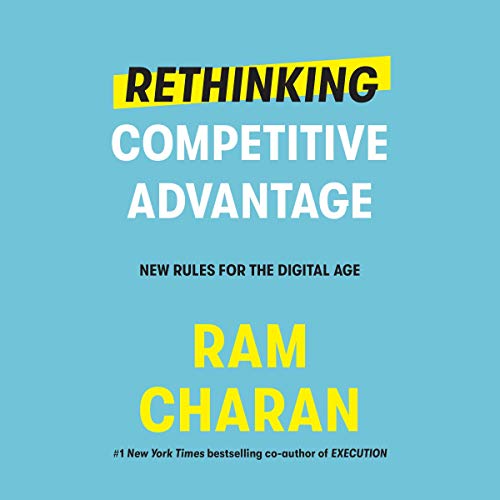 How do you gain an edge in the digital world order?

“Another book for the ages from a master.... Particularly insightful is his emphasis on how the end-to-end individual consumer experience will separate winners from losers in our new digital age.” (Fred Hassan, chairman, Caret Group; former CEO, Schering-Plough and Pharmacia)

The old ways of creating competitive advantage for your business - such as building moats to ward off competitors - have become dangerous. Giants like Amazon and Alibaba are creating vast new market spaces through a deft combination of tools like machine learning and business savvy that reimagines customer experiences while generating immense shareholder value.

A handful of traditional companies, including Fidelity Investments, Walmart, and B2W, have adopted these new approaches to reinvigorate their businesses. Most, however, are stalled - and the clock is running out. In this lively, accessible guide, Ram Charan, best-selling author and adviser to some of the world’s top CEOs and boards, redefines competitive advantage for the digital-first era, offering a set of new rules to get ahead:

Filled with stories that peek behind the curtain of digital behemoths as well as traditional companies that have transformed their organizations, Rethinking Competitive Advantage offers concrete advice and methods to help you conceive of new market spaces and moneymaking models.

Competing against digital giants might seem daunting, if not impossible. The necessary computing power is within any company’s reach. By borrowing from these digital winners’ playbooks, traditional companies and upstarts alike can gain an upper hand. Whether you’re in the C-suite or brainstorming the next big idea from your garage, Rethinking Competitive Advantage is the ultimate guide to creating competitive advantage today.

“Rethinking Competitive Advantage is the book to redefine advantage for the digital generation. Charan lays out the new golden rules for an increasingly competitive world. His unfettered access to leaders of successful companies gives him insights that you won’t find anywhere else.” (Douglas L. Peterson, president and CEO, S&P Global)

“Winning the technological revolution isn’t about technology, as Rethinking Competitive Advantage demonstrates. Charan, grand master of strategy, has written the indispensable book on the radically new rules of the digital age.” (Geoff Colvin, best-selling author of Talent Is Overrated and senior editor at large, Fortune)

“The companies we have invested in have mostly pursued a culture of attracting exceptional people, producing efficiently, and lowering cost. Market forces have obliged us to become more adaptable, consumer focused, and innovation oriented. Charan’s book Rethinking Competitive Advantage fits like a glove in helping us adjust to this new world, so much so that we are distributing it to all our top executives.” (Jorge Paulo Lemann, co-founder, 3G Capital)

quite a compelling point by Ram Charan to digitize your records, grow your business. i think this book will be remembered for a long time as amongst the first to urge businesses to digitize, or fall prey to the digital behemoths

Must read in this Digital World!

We have to adopt digital technologies faster than we think we could. It’s time for change!

There's nothing new in the book

If you are in the habit of reading, this book will not add anything to your knowledge base. In fact, there's something which you would find challenging to accept as some the conclusions mentioned in the book have already been challenged/ clarified (on the contrary) by WSJ and NTY. I did not find the book at par with any of the other books written by the author.

Great perspectives on transformation! A new perspective on cash generation.Must read for CEO of traditional businesses!

The author is trying to stay ahead of the change curve. His review and advice of business at the speed of light shows the critical need for all who need not only survival skills against giant data-driven competitors but also winning models for a smart competitive edge. It is just so difficult to stay in front of the velocity re the subject matter that I imagine another book forthcoming.

A nice read for transforming any leader & business