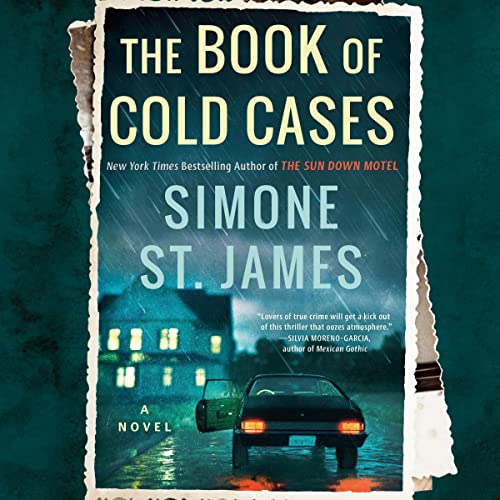 The Book of Cold Cases

A Most Anticipated Novel by PopSugar * CrimeReads * Goodreads

A true crime blogger gets more than she bargained for while interviewing the woman acquitted of two cold case slayings in this chilling new novel from the New York Times best-selling author of The Sun Down Motel.

In 1977, Claire Lake, Oregon, was shaken by the Lady Killer Murders: Two men, seemingly randomly, were murdered with the same gun, with strange notes left behind. Beth Greer was the perfect suspect - a rich, eccentric 23-year-old woman, seen fleeing one of the crimes. But she was acquitted, and she retreated to the isolation of her mansion.

Oregon, 2017. Shea Collins is a receptionist, but by night, she runs a true crime website, the Book of Cold Cases - a passion fueled by the attempted abduction she escaped as a child. When she meets Beth by chance, Shea asks her for an interview. To Shea’s surprise, Beth says yes.

They meet regularly at Beth’s mansion, though Shea is never comfortable there. Items move when she’s not looking, and she could swear she’s seen a girl outside the window. The allure of learning the truth about the case from the smart, charming Beth is too much to resist, but even as they grow closer, Shea senses something isn’t right. Is she making friends with a manipulative murderer, or are there other dangers lurking in the darkness of the Greer house?

"Lovers of true crime will get a kick out of this thriller that oozes atmosphere."—Silvia Moreno-Garcia, New York Times bestselling author of Mexican Gothic and Velvet Was the Night

"Simone St. James knows how to haunt you. The Book of Cold Cases is St. James at the top of her game, expertly weaving the past and the present to reveal a chilling tapestry of real world mystery and supernatural suspense that will have you turning pages well past your bedtime and jumping at every little sound."—Jennifer McMahon, New York Times bestselling author of The Drowning Kind

"No one writes a ghost story like Simone St. James, whose uniquely spooky thrillers are as chilling as they are captivating, and The Book of Cold Cases is St. James at her best. Steeped in atmosphere and spine-tingling chills, this gripping mystery will haunt you from the very beginning."—Laura McHugh, award-winning author of What's Done in Darkness

What listeners say about The Book of Cold Cases

The narrator is the best i have heard in a long long time. very finely read and worth every second of your listening time.
story is pretty classic and the twists are to hold on for.

The book was engaging but in the third act the story got a bit predictable but still entertaining as hell ….so engaging even when I guessed what happened

loved it. the mystery is revealed half way yet you will want to read till the end

Was an OK read.

I went into this book with too much of expectation but, was let down. The initial chapters were intriguing, which was why I was so eager to read this book. It was just an Ok read for me.

horror and thriller book lovers will love it!! the whole performance was great as well!

Struggled to finish this.Was so looking forward to this on,having loved all three of hers i'd read. It was borderline boring and really dragged. The plot is predictable and wafer thin. The narration for Beth was fine but the narrator for Shaye really annoyed. She sounds on the verge of tears and overdramatic whether she is facing a ghost or talking about her cat. Am going to avoid anything done by her
So yeah, a disappointing read for me

I don’t understand all the positive reviews

Full disclosure: I couldn’t even finish this book.
So perhaps it is unfair to write a complete review.
What I can say, with absolute certainty is, I love the way that the book begins and I loved the premise or the set up.
It sounded like a book written just for me and I was sure to be enthralled.
For the first few chapters I enjoyed it.
I truly enjoyed the narration and things seemed to be moving alone nicely.
But the minute the other narrator begins, the supernatural aspects of this story seemed to be over the top, not even slightly subtle and so “in your face” and ridiculous that I couldn’t even finish listening to it.
I was expecting a beautifully written, creepy ghost story with true crime elements.
Unfortunately the supernatural elements were just not believable and even a little silly from the minute they start.
Thus, I couldn’t finish it.
This is third SSJ book that I’ve started with very high hopes only to be totally let down.
I won’t be making this mistake again.
I hate leaving negative reviews, I am certainly no writer, I am certainly not capable of doing what some of these exceedingly talented authors do so I always feel strange when my
comments are not positive.
Perhaps you will enjoy it.
I could not.
I did not…
Maybe in a few years I’ll actually try to read some of her stuff in the original hardcover or paperback format and maybe that will change my opinion.
But for now, just no…

I'm a big Simone St. James fan (The Sun Down Motel and The Broken Girls were both 4.5 stars for me). But this story was predictable, repetitive, the main character was dull and so much was overexplained. The mystery is solved halfway through and then the story is dragged out until the end where it's just summarized for you by the main character. Not at all what I expect from this author. I do think I would've liked it better if I read the book vs listening to the over-acted and forceful narrator...but even still, it was just such a let down.

Another one of her great books such an awesome read couldn’t put it down. So many twist and turns cat keeps you on the edge of your seat the entire time. Love the relationship between the two primary characters.

reviews suggested I'd like this book. I kept expecting it would get better. It didn't.......

Not the Sun Down Motel

I love this Author, but nothing compares to her Sun Down Motel work. That book was amazing and so I expected more hauntings and scare the crap out of me type stuff. This was not it. Hopefully her next work will live up to my expectations, because when she writes something well, she writes it so well!

I thoroughly enjoyed this story. So far, this is my favorite of all Ms. St. James' books but I look forward to many more to come.

Too long and not one likable character

I usually love Simone St James, but this book did not do it for me. I was uninterested from the start and the terrible protagonist just made the book worse. Definitely skip this one:

I dislike Brittany pressley’s voice and hate saying that but she makes this one tough to listen to. Otherwise, it was a fun and gripping spooky story and I enjoyed the other two narrators very much! Would recommend.

The Narrator Ruins This One

The story was predictable—even the “twists.” It had the bones to be decent, but predictable plot, bad narration (the audiobook reader on this one is TERRIBLE), and an unsympathetic protagonist? It’s a no for me.

I read this book in 2 days. The narration is good and the story is captivating until you get to the end. The end was such a let down I struggled to give it 3 stars but the rest of the book is what earned the stars. It had the potential to be great but unfortunately this one was a miss.

Interesting page turner with some good dark scenes and a supernatural element. Got fed up with whiney Shay sometimes

I highly recommend Simone St James, the stories are interesting and never drop off to dull filler. It's all relevant to the plot. The characters are fleshed out and likeable, even Beth who isn't the nicest of people. The narrators are fantastic and never took me out of the story.

I could not stop listening to this book! I listened every chance I got! I would 100% recommend 👌

I do like this style of story and the narration was good. enjoyed this and enjoyed the sundown motel even more

This is the third Simone St. James book I've read. I have enjoyed all. Love the narration and realistic storyline with the usual scary twist.

I hadn’t read this author before I listened to The Book of Cold Cases, now I am looking to see what other books are available!

I loved The Book of Cold Cases and became obsessed with the historic murder which true crime blogger, Shay, is investigating. The possible killer (Beth) is one of the most powerful and confident characters I have encountered in many books and she is wonderfully depicted in the audiobook.

The story takes in Shay in the present, Beth in the past and present and we see the murder investigation unfolding, a family at breaking point and a blogger in midst of a personal crisis too.

Shay has a huge story fall into her lap, a story people have wanted for forty years, but not everyone will be happy she is digging. Something in Beth’s house is restless and Shay will be an unwelcome visitor, to get too close to Beth can be dangerous. The way Shay’s interfering is not welcome was made very clear and was utterly chilling.

Performances were good but I wasn’t that enthralled with the story itself. Not a bad listen but I didn’t find myself rushing to listen.

Loved it from start to finish. Great story and narration. Interesting developments along the way and kept me entertained throughout.

Another winner from Simone St James. This was a highly anticipated read for 2022 for me and it did not disappoint.

I listened to this on audio, narrated by Brittany Pressley , Kirsten Potter , Robert Petkoff and they all did an amazing job of keeping the suspense and the creep factor was high. I really liked the character of Shea, a true crime blogger who by chance meets serial killer, Beth Greer, the Lady Killer from the 1970's. She gets the chance to interview her and gets al whole lot more than she bargained for.

It was a story that had me hooked from the very beginning. I could not stop listening and I really needed to know how it was all going to end. And that house - creepy or what!! Such a great listen, highly recommend.

Not bad but not great either

Average. Makes some good points about thre treatment of women and crime and society in the 70s. Not particularly scary at all nor all that suspenseful. An easy listen basically.

I don’t believe Simone St James could write a bad book even if she tried very hard.
Another gripping and enthralling dance with the paranormal.