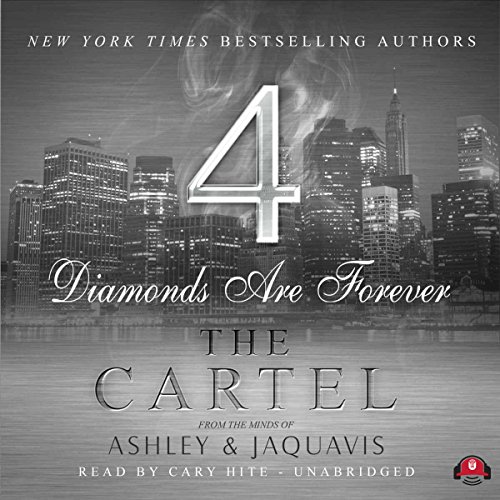 You thought the Cartel was over, but Diamonds are forever….

The Diamond family has survived murder, deceit, and betrayal. Through it all, they’re still standing tall, and a new era has begun. After surviving an attempt on her life, Breeze has moved into the queen’s position by Zyir’s side. Zyir has taken over the empire and locked down Miami’s streets; the world is in his hands. But there is always new blood ready to overthrow the throne.

Young Carter has retired and moved away from the madness - that is, until he gets an unexpected visitor at his home. This person shakes up the whole family, causing chaos that threatens to bring down the Cartel for good.

Can a person just be dead

If one more person comes back from the dead! The stories would be more realistic if people weren't declared dead in one book but came back for whatever reason in another. I can't keep up. as much as I love the book series if one more person returns from a fake death, I'm going to stop listening 🤣

If you don’t pay attention, you will have to rewind. This book is a good read with more of the same from the previous reads in this series. Some stuff is straight unbelievable. Unbelievable in the sense you are going to be like, yeah right, that could happen(sarcastically). I did enjoy it, the sound effects, had me looking around at times trying to figure out if that was the book or something going on near me, lol. The character development, always good, you feel like you know them especially by now. I’m being really vague as not to give away the juiciness. You will not get bored, excitement throughout. Wondering if there will be a #5.

Should have stopped with book 3

I love Ashley & JaQuavis, and this series very much. However, this is just a horrible book. These great characters just reappear and we are expected to believe it with no explanation. The only bright spot is the truly awesome reading of Cary Hite, at least he never misses.

Im almost done with the book, but this review was needed before the ending. Carter is not a leader. How is it that you have guards but your woman doesn’t? He move like a simp. He’s weak and im sick of him. This whole series is some BS. Nobody stays dead apparently and the storyline changes. Its disappointing.

I love this book...well, the Cartel series period. on my way to listen to book 5. Hope it's just as good.

Yes and they are enjoying it

Which character – as performed by Cary Hite – was your favorite?

Can't wait for book 5. When I first started reading book 1, I didn't think I was going to enjoy listening to the series. I have 4of my friends listening and they love it.

I'm so attached to this series

Where does The Cartel 4 rank among all the audiobooks you’ve listened to so far?

Carter. He was strong, level-headed, mature, and loyal. He took charge of his family and I loved that about him.

I loved his performance. He acted out each part and each character could easily distinguished.

When the brothers put their differences aside.

I was mad at first because I felt the twists ruined the first three books, but the story definitely stood on it's own and grew on me after a couple of chapters. There was some continuity issues also. I wasn't too crazy about the ending though. I will definitely check out part 5, but must say, I'm nervous about the direction they are going in, maybe because I'm so in love with young Carter. :) overall great book. I didn't want it to end.

Spirit's of the past

This book is filled with the same drama that I like and have read in the previous Cartel series, with so many twists and turns it leaves you wanting more. I would go into detail about the characters but due to all the twists and turns of the previous Cartel series I don't want to give nothing away. The violence in the book is still what gives the book all the drama and give the readers an adrenalin rush. The narrator did an excellent job and brought life to this book and the characters will be having you say "wtf". Don't miss this one because it will leave you wanting more but it also answers questions that you may have formed in your head from the previous Cartel books.

Literally disappointed in this book. Everything that was built in the previous books just got thrown away like it never happened. No one stays dead in the book. You may as well bring back Carter Diamond and act like nothing happened

the series get better and better. this should be a movie or TV series. the narrator have you lock in for hours. I listen to while at work. It help the day go by fast.