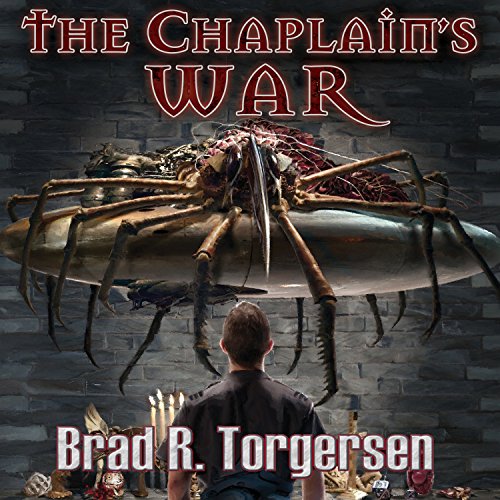 The mantis cyborgs: insectlike, cruel, and determined to wipe humanity from the face of the galaxy. The Fleet is humanity’s last chance: a multi-world, multi-national task force assembled to hold the line against the aliens’ overwhelming technology and firepower. Enter Harrison Barlow, who like so many young men of wars past, simply wants to serve his people and partake of the grand adventure of military life. Only, Harrison is not a hot pilot, nor a crack shot with a rifle. What good is a Chaplain’s Assistant in the interstellar battles which will decide the fate of all? More than he thinks. Because while the mantis insectoids are determined to eliminate the human threat to mantis supremacy, they remember the errors of their past. Is there the slightest chance that humans might have value? Especially since humans seem to have the one thing the mantes explicitly do not: an innate ability to believe in what cannot be proven nor seen: God. Captured and stranded behind enemy lines, Barlow must come to grips with the fact that he is not only bargaining for his own life, but the lives of everyone he knows and loves. And so he embarks upon an improbable gambit, determined to alter the course of the entire war.

What listeners say about The Chaplain's War

A lifeline during a TERRIBLE week for me

I spent WAY too many hours in the car during the week that I listened to this book. I ran out of podcasts and was on a new medication. My brain was going Etch-a-Sketch, and I had the proverbial "miles to go before I sleep." George Newbern and Brad Torgerson kept me engaged and aware and interested all the way to my destination for several days. The story was fascinating, the performance was engaging, and the characters interesting. Get the Kindle book. Buy the audio book to go with it.

Excellent in every way

As a real chaplain and fan of science fiction I can say this is one of the best books I've ever read. The alien culture is imaginative, thought-provoking and creative while still sharing the fun of standard bug aliens. The philosophical and religious questions of military and Chaplaincy are also very compelling and accurate. Plus the narrator has many sutle and diverse character voices

Probably one of the most interesting and original sci fi books out of the 100+ i have read in the last year.

There is a fair amount of discussion of religion in the book, but it is not heavy handed or denomination specific.

Torgersen did a good job with his aliens. Like most science fiction, the aliens think and behave in a very human like way, but these aliens have enough differences from humans to make them interesting.

Living in Texas where we have fire ants, it's not at all hard for me to envision an alien race evolved from insects who have an instinct to eradicate any life form that might in any way compete with them for resources and territory.

These 'mantis' aliens have been sentient much longer than humans. It's not hard for me to think a more evolved species could overpower a less evolved species.

I do have a few small quibbles with the book:

Those are just quibbles, this book is well worth the price!

Starship Troopers meets The Lords of Discipline, flavored with a bit of The Gospel According to Gamaliel Crucis. Well written and expertly narrated. I really enjoyed how the story shifted back and forth from training and present day. Highly recommended.

This is one of those books were they discuss everything. The discussion is often intellectual and even sometimes entertaining, but mostly very little happens.

Refreshing take on religion in sci if

This is a story of mankind's run up against a powerful and overwhelming alien. The story takes place after this conflict has started and details the impact that a couple of individuals can have on such events. Good stuff it is.
As for the religion part, it is there but is nothing overwhelming or even takes up much of the story. The refreshing part is that it is not something portrayed as bad or something that had negative influences within the world this story creates. That is much different in that most other stories, when they touch upon religion, make it out as a influence that drives evil or poor behavior and in many cases something that makes those involved backwards. This type of handling of religion is so common that it is a trope in science fiction and easily predictable and thus boring.

This is an expansion of the author’s original short story and is a told very well and is very enjoyable. I was glad when the author expanded the short story into this full version. I highly recommend it!

best st I have read of modozern age

Great up on Heinlein and duck. This is in the same league as their bests
Inventive story structure adds to the flow and enables belivable surprise twists
Characters are fully developed no disposable villains or sidekicks. You feel the authors putting g his own pain of real loss into his writing. Not ur typical mil-sf much more than that a journey of self discovery

I didn't expect much of this story going in, but soon was surprised to realize this was an excellent, thought provoking story.

To me, three stars means: pleasant. The story was enjoyable though I did feel like it dragged on a bit sometimes. It didn't change my life. I wouldn't listen to it again. But I'm glad I did. Likewise, the narrator is good. I liked him. But I'm not in a rush to listen to anything else he's done. I'd still recommend this to friends who are interested in Sci-fi and religion.

The only thing I really didn't like was the constant shifting back and forth between past and present. It's a great device but it was overused and eventually got a bit tedious. That said, the beginning is really good and I thoroughly enjoyed the desert chapters.