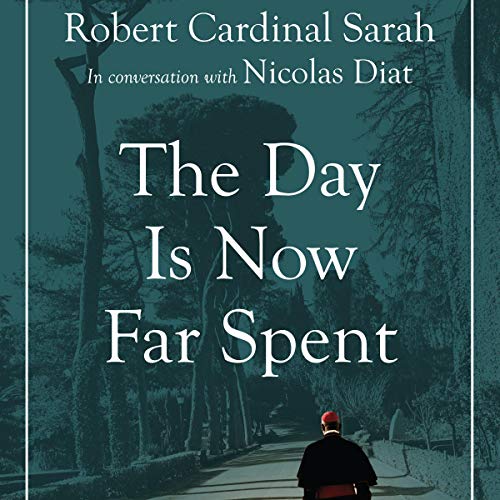 The Day Is Now Far Spent

In this powerful audiobook by the acclaimed spiritual leader and best-selling writer, one he calls his "most important", he analyzes the profound spiritual, moral, and political crisis in the contemporary world. He says that he "considers that the decadence of our time has all the faces of mortal peril."

"At the root of the collapse of the West, there is a cultural identity crisis. The West no longer knows who it is, because it no longer knows and does not want to know who made it, who established it, as it was and as it is. Many countries today ignore their own history. This self-suffocation naturally leads to a decadence that opens the path to new, barbaric civilizations."

In these words, Cardinal Sarah summarizes the theme of his audiobook. His finding is simple: Our world is on the brink of the abyss. Crisis of faith and of the Church, decline of the West, betrayal by its elites, moral relativism, endless globalism, unbridled capitalism, new ideologies, political exhaustion, movements inspired by Islamist totalitarianism.... The time has come for an unflinching diagnosis.

After the great international success of his first two books, God or Nothing and The Power of Silence, Cardinal Sarah offers a wide-ranging reflection on the crisis of the contemporary world while teaching many important spiritual lessons.

What listeners say about The Day Is Now Far Spent

One could spend their adult lifetime attending Mass and expecting some insightful catechism only to never come quite close to grasping what Catholicism is really about. Listen and learn from Cardinal Sarah: prayer, confession, adoration, and the celebration of the Mass. Catholic simply because it is true and beautiful.

Refreshing. Cardinal Sarah's honesty and frankness are refreshing and eye-opening. This book is a real wake-up call. A call to sanctity and a life of holiness and awareness of the state of the Church today and what is happening in the world right now, as well as how these two effect one another.

Before listening to this book I would have divided the current Church into liberal and conservative factions. Cardinal Sarah manages to call for a return to Catholic values and still remain faithful to the depth of teachings of Vatican II. The Church is in the world but not of the world.

A must listen for any Catholic out there!!!

I can't stress this enough. This is a gift of the Holy Spirit, written through these authors. A much needed grounding in faith in these trying times of the church.

Cardinal Sarah has moments of great insight and spiritual depth. Regrettably these are buried beneath shallow exegesis and spurious cliches. Among the disappointments are the historical inaccuracies related to clerical celibacy. The argument for papal supremacy has no depth at all. His antagonism toward America and democracy, and papering over the evils of Russian aggression, make his “conservative” theology at home among today’s Marxists.

The narrator is competent for general reading, but the frequent mispronunciations of ecclesiastical terms, and particularly Latin phrases, made it difficult to listen to at points.

Profound insights and well articulated. I Holy man, I conclude, with much clarity, eloquence and penetrating understanding of our times. I appreciate his historical, social, intellectual and theological grasp of the many complex and critical issues facing our Church and the world today. A very important book indeed that all Catholics should read and reflect on. Thank you Cardinal Sarah, you give us hope and comfort that we still have true Shepherds such as you guiding the Flock of Christ.

Robert Cardinal Sarah provides much needed guidance and wisdom to faithful Catholics. Today, ambiguities, contradictions, and even heresies are spoken and taught by many modernist leaders in the Church hierarchy. In contrast, this book contains serene wisdom in continuity with the teachings of Christ and of the saints and martyrs. Importantly, Cardinal Sarah has a unique ability to identify errors and problems in the Church and society while uniting, not dividing, the faithful. He is a true shepherd trying to genuinely lead everyone to Christ and heaven in a compassionate, authentic, and truthful way. I highly recommend this book to all Christians.

The Prophet Jeremiah of our days

Simultaneously frightening and hopeful. This holy man speaks boldly and frankly to the spiritual torpor that afflicts Europe and America especially. Thank you Audible.

cardinal sarah is amazing. he covered so many things in this book. BEAUTIFUL and educational

a must read for today's Catholic

it is the truth spoken in honesty and love. listen and take this to heart for you are the future of the church

Everyone will benefit from reading this book. it should be on the reading list of every political, cultural and religious leader. It reveals the roots of the problems that assail our societies in the West and shows how the paths we are on are leading to eventual social fragmentation and breakdown. Sadly those most in need of reading it will be closed to doing so.

This book hits every nail straight on the head. It's easy to follow yet very thought provoking. I love how Cardinal Sarah puts his faith into words. It has really inspired me, to me much more confident with charity to be outspoken in my faith. Especially with people who are unlikely to share the same view.

Listen and reflect. Cardinal Sarah is a treasure.
Spotlights the wonderful contributions of Pope Benedict.
For every Catholic.
That is all.

The cardinal pulls no punches on the West

With all due respect to the reader, who read in an even and consistent tone, I'd prefer a French accent. It's good to get a Francophone perspective as well as an African one. The content is dynamite. What an inspiration!

This is obviously just my opinion and others may not agree but to me, It’s extremely boring and long winded. It’s more about the musings and inner monologue of an old cleric than a reality check about specific events unfolding and transforming the church, lots of what we should be or could do with a few references to the gospel or speeches given by pope thrown in. I was expecting to read a frank and honest book about the corruption, changes introduced by Vatican 2, the direction of the church and why it seems in opposition sometimes to the very word of God etc.
It may contain more and get better as the book progresses but I didn’t make it any further than a few chapters and long before then I was finding myself to be frustrated by listening to it. Whilst listening, I Pictured in my head, an old guy sitting in his office, overlooking Vatican City, bored out of his mind, contemplating the religious world he lives in and allowing his inner monologue to spill out onto the keyboard of his PC. 😁