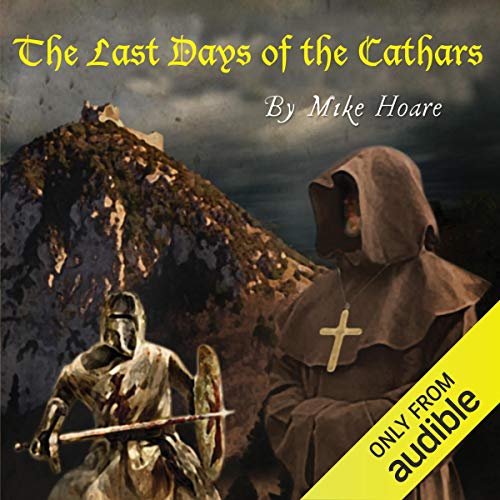 The Last Days of the Cathars

In the middle of the 12th Century an unknown Christian sect emerged in southern France. They claimed to be the sole successors of the original Church of Jesus Christ. They called themselves Cathars. Despite their sincere belief, the Cathars were deemed by the Roman Church to oppose several of their fundamental principles of Christianity. Because of these unorthodox practices the Cathars were outlawed by the Church of Rome, and sentenced to a merciless extinction.

What listeners say about The Last Days of the Cathars

This is the story of the Cathars, a heretical sect which arose in parts of France and neighboring countries during the 12th Century. It's a fascinating and little known chapter in history which sheds much light on life and religion in medieval times. The Cathars, who claimed to be the sole practitioners of the true Christianity, as Jesus proclaimed it, were a strange lot. They did not believe in sex, owning property or eating meat or dairy. They probably would have died out of their own accord in a century or so, but the Catholic Church of its day was certainly not going to wait around for that to happen. In 1209 the Pope in Rome launched the Albigensian Crusade with the goal of converting or wiping out the Cathars and all other heretics in Southern France. This is an informative and entertaining book, written in a somewhat informal style which differs from the approach which might be taken by a professional academic historian. For example, the author imagines the thoughts of various historical figures and probably takes some liberties with the dialogue attributed to them. My one major criticism is that I thought a bit more detail was needed in places, particularly in recalling the Siege of Montsegur which amounted to the last stand of the Cathar faith. The book is enthusiastically and clearly read by the author.

I have long been fascinated by the Cathars, the sect which the Roman Catholic Church not only proclaimed heretical but eventually snuffed out completely with the simple expedient of burning its adherents at the stake. I have read several books about the so-called Crusade ordered by the Pope against these peaceful people who considered themselves Christians, but this is the first which actually clarified for me some of the Cathar beliefs. When I began to listen, I thought the narrator's voice and even his prose were a bit slow and old fashioned to hold my interest, but soon it became apparent that both were perfect for this story. Both author and narrator (one and the same) clearly made a great effort not to taint the narrative with condemnation of the persecutors of the Cathars.

I highly recommend this book for anyone interested in wars of religion (of which we seem to have plenty even today), medieval history, religious thought, freedom of speech and religion, and the awful deeds done in the name of the Roman Catholic Church during the days of the Inquisition. Until I read this book, I was not even aware that the Inquisition extended beyond Spain, but here we are in Languedoc, a region now considered part of France. I also was not previously aware of the complicated politics which underlay this appalling (and successful) attempt to completely extirpate all faithful believers who called themselves Cathars, a rather quiet and humble sect which the Pope was worried might undermine the supremacy and authority of the Catholic Church. This is an eye opening and at times terrifying story, told with grace and simplicity.

Surprisingly entertaining and informative. The history was very lively and going through the rites with the chatacters made me feel like I was there.

Slow getting started but changed shortly thereafter. The history presented was great. I knew about the Cathars but it was in peaces. This book put it all together. Great job, narration was super. Very good read. Thanks.

Who might you have cast as narrator instead of Mike Hoare?

This is read in an amateurish way with cats heard in the background! Needs a professional actor or presenter for this.

Do you think The Last Days of the Cathars needs a follow-up book? Why or why not?

Not really. The story is fully covered though in a superficial way. Fortunately for me I have enough background of the Cathars to be able to make sense of the story.

This is the only book in Audible on the subject of Cathars and therefore is the best available. A much better book is "The Cathars: The Rise and Fall of the Great Heresy" by Sean Martin (available on Kindle) and would benefit from being an audiobook.

More of a sermon (so far). Not what I wanted

Would you ever listen to anything by Mike Hoare again?

Not what I'd expected. The more I listened the more it reminded me of a sermon on a soapbox. I wanted a passionate history - not for me I'm afraid. What on earth is the point of all the bible references?

Really enjoyed this book about the cathar. I knew scanly about their end only but this book was well researched and delivered a wealth of knowledge about a period of history and beliefs of its time.