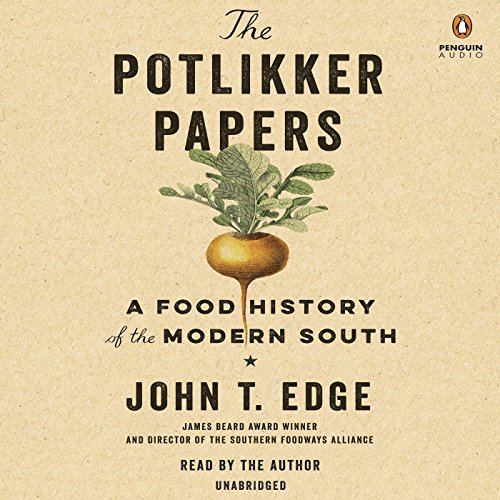 A people's history of Southern food that reveals how the region came to be at the forefront of American culinary culture and how issues of race have shaped Southern cuisine over the last six decades.

The Potlikker Papers tells the story of food and politics in the South over the last half century. Beginning with the pivotal role of cooks in the Civil Rights movement, noted authority John T. Edge narrates the South's journey from racist backwater to a hotbed of American immigration. In so doing, he traces how the food of the poorest Southerners has become the signature trend of modern American haute cuisine. This is a people's history of the modern South told through the lens of food.

Food was a battleground in the civil rights movement. Access to food and ownership of culinary tradition was a central part of the long march to racial equality. The Potlikker Papers begins in 1955 as black cooks and maids fed and supported the Montgomery Bus Boycott, and it concludes in 2015 as a Newer South came to be, enriched by the arrival of immigrants from Lebanon to Vietnam to all points in between.

Along the way The Potlikker Papers tracks many different evolutions of Southern identity - first in the 1970s, from the back-to-the-land movement that began in the Tennessee hills to the rise of fast and convenience foods modeled on Southern staples. Edge narrates the gentrification that gained traction in North Carolina and Louisiana restaurants of the 1980s and the artisanal renaissance that reconnected farmers and cooks in the 1990s and in the 2000s. He profiles some of the most extraordinary and fascinating figures in Southern food, including Fannie Lou Hamer, Colonel Sanders, Edna Lewis, Paul Prudhomme, Craig Claiborne, Sean Brock, and many others.

Like many great provincial dishes around the world, potlikker is a salvage food. During the antebellum era, masters ate the greens from the pot and set aside the leftover potlikker broth for their slaves, unaware that the broth, not the greens, was nutrient-rich. After slavery, potlikker sustained the working poor, black and white. In the rapidly gentrifying South of today, potlikker has taken on new meanings as chefs have reclaimed the dish.

Over the last two generations, wrenching changes have transformed the South. The Potlikker Papers tells the story of that change - and reveals how Southern food has become a shared culinary language for the nation.

"John T. Edge, an accomplished food writer focusing on the South, narrates his audiobook in a discernible drawl.... His voice, literal and figurative, informs every page of this work. The discerning listener will embrace Edge's folksy style as he moves through 60 years of contemporary history." ( AudioFile)

What listeners say about The Potlikker Papers

Best book of the year!

What did you love best about The Potlikker Papers?

All of it! A clear explanation of the history, thorough description of the characters involved and the wisdom to show how the current scene has blossomed

What was one of the most memorable moments of The Potlikker Papers?

I have been compulsively telling my friends all about Georgia Gilmore-- very grateful to learn about such an amazing woman.

Have you listened to any of John T. Edge’s other performances before? How does this one compare?

This is my first if there are more I will track them down.

This is such a great and important book. Thank you so much for writing it and publishing it.

The idea of this book, to look at history through the lens of food culture, while telling the story of that food culture, is new to me. John T. Edge carries it out masterfully. He connects a million dots in highly engaging, lyric prose. To hear him read is a treat and a bonus.

Long book but worth every second !

So informative! John is a fantastic historian, narrator and someone I’d have coffee with to learn even more than this book offers. There is so much more to be learned. Thanks for this introduction to culture that is the foundation to so much of our country’s food culture.

Overall, I loved this book. I could listen to him talk all day. So much information about food history that I had never heard nor thought about. Only dislike from me was, at times, it seemed to drag on for a little too long, and several parts felt a little flat.

A reviewer said this was an attack on his culture. What it is truth, with gravy to help it go down easier. Amazing artistry.

If you are from the south or appreciate it, this is an amazing journey through generations of traditional southern cuisine and the role it played in our history. It is well written and inspiring to read. Well done John Edge!!!!

Excellent account of the old and new south and the cuisine that shaped and sustained it.

This is an honest and highly insightful read, in recognizing the origins of Southern cuisine. Potlikker Papers points out painful yet accurate reality of our history, but also changing and demonstrated hope in changing behaviors of today.

It's a thoughtful and provoking history of Southern foodways. The book highlights the beginnings of the South's culinary traditions, its evolution and its role in history and politics. While most authors aren't performers, John T. Edge's reading is exactly how the book should be heard.