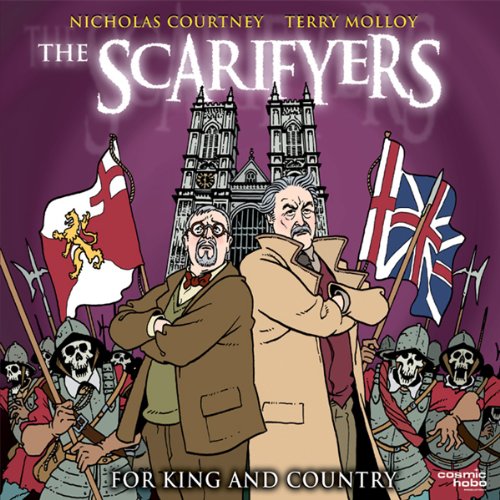 The Scarifyers is a series of rip-roaring tales of comedic supernatural intrigue set in 1930s Britain, distilling the likes of Dick Barton, The Avengers, The Devil Rides Out and Quatermass into cracking new audio adventures. The Scarifyers is broadcast on BBC Radio 4 Extra, and has been described in the national press as 'rollicking good fun', 'a slice of audio perfection', 'the smartest and most enjoyable thing on British radio' and 'like Tintin but with the lights out.'

This is the third Scarifyers adventure."Sir" Harry Price, self-proclaimed Ghost Detective, has built a machine. His previous experiment - to turn a goat into a man - may have ended ignominiously, but now Harry plans to capture the spirits of the dead with his Price Ghost Captivator. If he can make it work, that is.Meanwhile, Londoners are being killed, in especially gruesome fashion, with their own electrical appliances.

But most puzzling of all is the Faraday Murderer's habit of leaving cryptic messages in 17th century English at the scene - messages that mention a certain Harry Price...

Age-old forces are stirring... The dead will rise... the Crown will fall. Can Lionheart and Dunning save King and Country?

What listeners say about The Scarifyers: For King and Country

Acting is Great as always...I love the comedy in this series,some wonderful one liners coupled with some brilliant overacting cameos....give me more Dunning...

Another excellent entry into the always enjoyable Scarifyers series of audio plays. Bring on the next one!