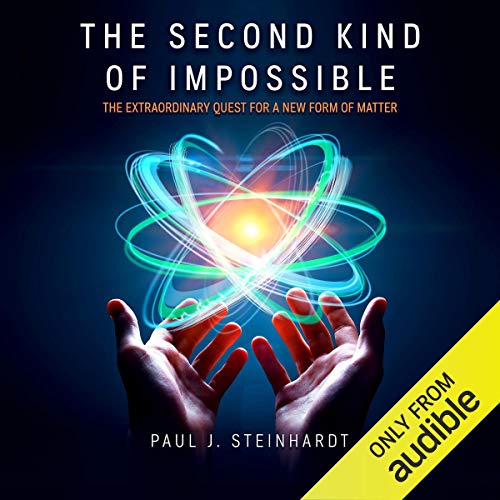 The Second Kind of Impossible

The Extraordinary Quest for a New Form of Matter
Written by: Paul J. Steinhardt
Narrated by: Peter Larkin
Length: 11 hrs and 21 mins
Categories: Science & Math, Physics
5 out of 5 stars 5.0 (1 rating)

One of the most fascinating scientific detective stories of the last 50 years, an exciting quest for a new form of matter. The Second Kind of Impossible plays like James Gleick’s Chaos combined with an Indiana Jones adventure.

When leading Princeton physicist Paul Steinhardt began working in the 1980s, scientists thought they knew all the conceivable forms of matter. The Second Kind of Impossible is the story of Steinhardt’s 35-year-long quest to challenge conventional wisdom. It begins with a curious geometric pattern that inspires two theoretical physicists to propose a radically new type of matter - one that raises the possibility of new materials with never-before-seen properties but that violates laws set in stone for centuries. Steinhardt dubs this new form of matter “quasicrystal”. The rest of the scientific community calls it simply impossible.

The Second Kind of Impossible captures Steinhardt’s scientific odyssey as it unfolds over decades, first to prove viability and then to pursue his wildest conjecture - that nature made quasicrystals long before humans discovered them. Along the way, his team encounters clandestine collectors, corrupt scientists, secret diaries, international smugglers, and KGB agents. Their quest culminates in a daring expedition to a distant corner of the Earth, in pursuit of tiny fragments of a meteorite forged at the birth of the solar system.

Steinhardt’s discoveries chart a new direction in science. They not only change our ideas about patterns and matter but also reveal new truths about the processes that shaped our solar system. The underlying science is important, simple, and beautiful - and Steinhardt’s firsthand account is an engaging scientific thriller.

In anticipation of low review marks...

I was tempted to give this book low marks when I finished it, simply because I had high hopes that a theoretical physicist would've shed a lot more light on the deep physics than he did; but there was little to no deep physics discussed, just a few mentions of crystal symmetries, diffraction, etc. The majority of the book is a story of the author's personal/professional quest (in the literal sense of the word "quest") to find naturally forming quasi-crystals.

Once I sat back to take a second look at how this book was advertised, from the Audible summary down to even the book's title, I realized I allowed myself to be fooled - by myself. And I am the easiest person for myself to fool! The book delivers just as its summary suggests, and in my opinion it's a great story!

I learned a bunch of things I didn't know about crystals and geology and could not put this book down. It is surprisingly exciting, telling an instesting story with lots of twists and turns. I really like science books, even dry poorly narrated science books as long as they are real science. I read a lot of science, including science journals, so often I don't learn any science from science books. In this case I was repeatedly surprised by stuff I did not know. I had heard of quasicrystals and thought I knew what they were - but I learned I had misunderstood. I learned that non-oxized aluminum has never been found in any natural substace. How could I never had heard that before? Plus I got a great story of science risk taking and the process of science on the edge.

Anyway this was one of my favorite science books in a long time.

The narration was great.

A wonderful read into the workings of science

I loved this book. As a scientist I was really impressed by the tenacity and intuition of the author in pursuing the truth about nature. The writing was exceptional. This was one of the best books that I have listened to for a long time.

A catchy fun science exploration. I couldn't get enough, especially with all the references to Richard Feynman who is also one of my heroes.

The accompanying pdf is critical to follow the explanations in the story. While it is provided, it prints out to 111 pages. If properly presented it could have been on a handful of pages.

maybe others can follow without the visual aid, I couldn't once it got into the more complex portions of the explanations.

Just couldn't finish this on Audible. May look for it in hardcover. Just not well adapted to Audible.

Sadly, the interesting topic is diminished by the author’s relentless pursuit of self congratulation. His thin vail of modesty — his attempt to share accolades and scientific credit with fellow colleagues — is, per his narrative style, never free of personal pronouns that redirect the listener back to the real focus of the book — the “miraculous” leadership of a scientist who would like us to believe that he took receipt of Feinman’s Mantle within the first chapter of the book. Yawn. The laughably sloppy chain of custody described in the field work phase of the discoveries — the climax of the storyline — leaves little wonder that the Russians, in a subsequent follow-up excavation, failed to replicate the initial findings of the author’s theorized ultra-exotic, cosmically generates “quasi-crystalline” that happen to be so small that an electron microscope is a halfway measure toward identification. The story would have been far more interesting if the author chose the focus on the controversy and then work backward. In the end, I’m left wondering if, in fact, accusations are true that the author and his team had planted “synthetic” alloys within a haystack, a haystack the author describes as looking a bit like a “dog’s breakfast” — a gastronomic autopsy so rare that he and his team are, pretty much, the only persons on the planet qualified and capable of peer review. Methinks the scribe doth overmuch protest.

Learned a lot of the field of Physics..

Read like a novel...learned so much of what goes on behind the scene...loved it...well done..

The whole book could’ve been summed up in about 10 pages. False drama on a camping trip. A complete bore.

It wasnt what I expected at all....dry at first - a little over my head with all the technical jargon but I stayed with it and really glad I did. I learned a lot. Excellent story. very inspiring to never give up.

I'm not a scientist, but I found this story fascinating and informative, and more understandable than I thought it would be. There was humor, frustration, occasional edge-of-your-seat tension, and elation. And it comes with bears! It was a good book to listen to during my daily commute, often leaving me wanting just a few moments more. Well-read in the Audible version, with only a few bumps with the insert referrals to the accompanying pdf (and thank you for the pdf!). Give it a try-you can stretch your brain and be entertained at the same time!

Informative book and great story telling and perfect audio performance. I strongly recommend this one

This is an inspirational book for researchers and PhD students. It reminds you that never get disappointed and at the same time never fool yourself. Professor Steinhardt thank you for taking us to this amazing exploration and journey to the impossible discovery!