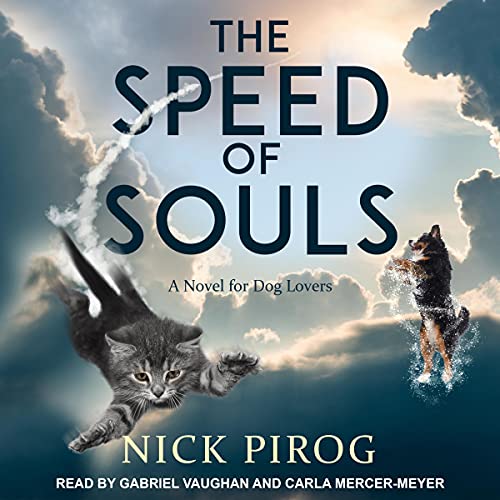 The Speed of Souls

Hugo was a dog. He died. Now he's a kitten. As Hugo adjusts to his new body (not just a cat - a baby cat!), his new home (San Francisco), his new outside (Where are the mountains? Where is the lake?), and his sudden urge to sit in every box he sees, he wonders if he'll ever see Cassie or Jerry again.

Back in Lake Tahoe, Cassie and Jerry attempt to come to grips with life without Hugo. Cassie fills the void with "Tadpole Guard" and "Worm Patrol" and ups her protection of Jerry (her human), who is in the midst of a cataclysmic midlife crisis. In addition to his dog dying, Jerry's last two books have been monumental flops, and he's still reeling from his fiancee leaving him for another man. As if these problems aren't enough, his parents (who have become late-stage hippies) are coming to live with him for the entire summer.

And so begins the journey of three souls, intertwined by love, loss, and perhaps something even greater. Told with Nick Pirog's charm and razor sharp wit, The Speed of Souls is at once a hilarious, moving, and transcendent work of storytelling.

What listeners say about The Speed of Souls

The only problem I have with books written by Nick Pirog is that there isn't more. He always has just the right about of seriousness to be interesting and the silliness to be entertaining. His picks for narrators are always top notch as well. Look forward to his next book

I couldn't get enough

I adored this book. It had so much love and humor in it. This is what pet ownership and companionship is to me as well.

wasn't sure initially, thought Jerry was a little wimpy but I loved it. I am a cat and dog lover so it was funny to hear their perspectives.

I'm in love with Nick Pirog. I've listened to all his books. The 3 am series is my absolute favorite! listened to this book with my mom ❤

I’m not the crying type but this one had me going a few times. I have seen and can imagine the rest of all the emotions and antics that he describes in this book. It makes me better appreciate the time I have on this earth with all my animals. Highly recommend.

I love Nick Pirog stories in general, this one is different in every way,but may be his best ever.
I have listened twice now . I’m a truck driver and listen to lots of books.
My wife was with me this trip and we found our selfs laughing,crying,holding hands ,and just plane having a great time. We were sad it ended and hope he writes more like this. Thanks MR Pirog.

Listen to it, Now!

Anyone who's loved a pet will understand. Trust your pets. It's just what I needed right now.
I recently got a puppy and her temperament, personality and quirks remind me so much of my old dog. She picked me not the other way around. Daisy is that you?
So, listen to it, cry some happy tears and hug your pets.

I thought this would be a book for kids - NOT. This is a book for adult dog and cat lovers. And, I could not put it down; I was completely invested to the very end. I was down right on the edge of my seat, biting nails. And speaking of nails, Nick nails it - this is why our fur babies own us - because we know we will never find a truer or more pure love. Thanks to the maker!

Don't hesitate to listen to this!

I have loved all Nick Pirog's books, but this storyline seemed to be a bit too farfetched for me, so kept passing over it. I should have known better. It's fantastic! As soon as I finished it, I curled up with my 14 yr. old dog on the bed and gave him kisses and tummy rubs. If there was one storyline to nitpick, it was the girlfriend. It really didn't add anything to the main storyline for me, but overall, I enjoyed the book immensely.

This is such an amazing heartwarming book! It brought tears to my eyes and smiles to my heart! I highly recommend the book and the narrators!

I laughed and I cried

I have laughed plenty of times at books and this book made me laugh out loud but this is the first book that has ever made me cry. warm, funny and unashamedly human the best book I have read in a long long time. cannot highly recommend it enough. If you read just one book this year make it The speed of souls you won't regret it.

A book that makes you laugh out loud, cry with abandon and hope fiercely for loves lost

The speed of souls

one of the most heartwarming books I have come across, a wonderful story and very hard to put down.
The author has a great way with words and is very witty and all of his other books are equally as good!
I can't wait to read more from this author.

I've Listened to all Nicks books with hours of uplifting pleasure and a rash of different emotions with things to think about when not able to listen. Thanks Nick
jo

What a wonderful, sweet, lovely, joyful story! I've only recently discovered Nick Pirog's books after finding 3.00 a.m. Henry Bins series in the free Audible Plus catalogue (fabulous btw). And I have to say The Speed of Souls is most definitely worth the credit...Animal lovers especially will enjoy this. Highly recommended.