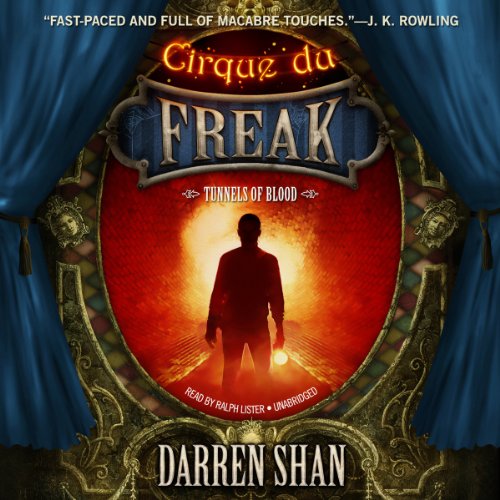 Half-vampire Darren and his new friend are on the hunt for a monster in the third installment of New York Times best-selling Saga of Darren Shan series.

Darren, the vampire's assistant, gets a taste of the city when he leaves the Cirque du Freak with Evra the snake-boy and Mr. Crepsley. When corpses are discovered - corpses drained of blood - Darren and Evra are compelled to hunt down whatever foul creature is committing such horrendous acts. Meanwhile, beneath the streets, evil stalks Darren and Evra, and all clues point to Mr. Crepsley. Can they escape, or are they doomed to perish in the tunnels of blood?

The big "twist" in the story is way to obvious, to predictable. And the buildup leading to the "twist" lasts way to long, which makes for a long painful streach.

I read these books as a child and listening to them again has been great. The performance by Ralph is awesome and makes the story even better. After listening to the first three books I can’t wait to carry on and finish the series! 5 stars all round!

Amazing plot just as hair raising as the first 2

honestly a great book in the series, I've always loved darren shan since I was a kid an all his books are fucking great

Minor lull in a great series

Not the best book of the series, but the series itself is good enough to justify the minor lull of romantic interest and doing some world/lore building.

loved it. listened to it in a day because I was so intrigued. oh yeahhhh

The best book so far

everything was well done and we'll performed. I loved it and I wish It didn't have to end

much better than the movie and much more story too. movie was pretty good too, i wish the movie had the whole story

I've read the Darran Shan series, all books, at least 3 times. now to be able to listen to them is more magnificent. fully recommend ☺️