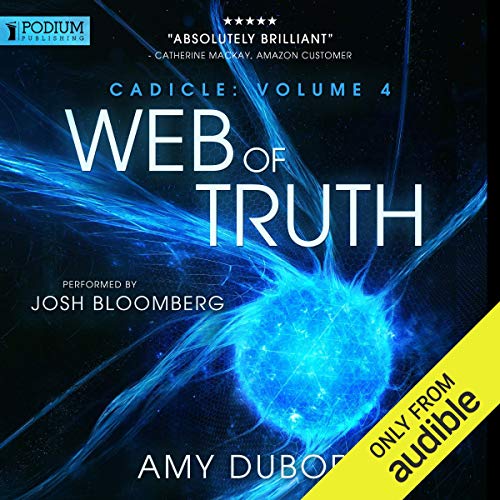 Some secrets are worth protecting....

Tension is mounting in the rift. With the situation dire, Wil is tasked to train a group of 20 young men to serve as his officers - collectively, the Primus Elites. He has five years to raise them to full Agents, and he'll need every minute. Training alongside them, Wil still needs to master simultaneous observation. But the closer he gets to achieving the feat, the more likely the Aesir will come to test him - to see if he's worthy of the Cadicle title bestowed on him at conception. If he can survive their test, he'll finally uncover the truth the Priesthood has gone to such great lengths to hide.

Web of Truth is the fourth installment in the Cadicle series. This character-driven novel with action, romance, and intrigue reveals the true nature of the war as Wil learns the secrets behind the Bakzen's origins.

What listeners say about Web of Truth

War is coming to the Rift, that is a certainty, the Bakzen and the Terrans must fight it out, and for that to happen, Wil will have to lead the charge. However, he cannot do this alone, and as such, he is tasked with training 20 young men to serve as his officers, the “Primus Elites”. He only has five years in which to train these men to full agents, and, in that time, he must master the skill of Simultaneous Observation, the skill that only he can learn, in which he can see not only real space, but also into sub-space and the rift, allowing him to see where all of the Bakzen fleet are at once. For this has been the Terrans greatest weakness, the Bakzen have been able to use the Rift to jump straight into real space and attack them at any time, knowing where they will be and destroying them, and then jump away, whilst the Terran ships can’t do the same. However, if Wil can learn this skill, he will be able to see all of their ships at once. This was a fascinating story from a multitude of different aspects. For one, I found it really interesting that all of Wil’s Prime’s (which again, had several links to other major Sci-Fi Masters, such as ‘Doc’ Smith, and his ‘Galaxy’ Primes, but more recently, in the Games Workshop 40K Universe, there are 20 Primarchs chosen by the ‘Terran Emperor’ to help him bring order to the Galaxy, and these are all ‘Men’ as well) As with a lot of the previous Sci-Fi (Except maybe ‘Doc’ Smith), I also find it really interesting that the Primes always have to be ‘Men’? Especially from a Female author. I don’t want to give away spoilers, but there was the wonder about whether there would be infighting amongst the Primes and eventual fall (the same as happened with 40K or as it is now known 30K and the Horus Heresy), but in this case, maybe more in relation to Saera? It is interesting that so many Authors choose the path of having ‘Primes’ as all Male (‘Doc’ Smith didn’t as he had paired couples), but it makes you wonder? Regardless, Wil takes his Primes and trains them, and this makes for the bulk of the story. However, this enables the Author to have a wonderful time exploring not just the psychic powers of the Primes, but also Wil, and we are able to learn more of their abilities, the Rift, and in some rather stunning turn of events, the history of the Bakzen. Web of Truth could easily have been titled ‘Web of Lies’ for all that has been withheld, but this is one of those books that you get to actually learn a lot. DuBoff is great at actually closing plot lines, something that makes her such a brilliant Author. So often, Authors create all these wonderful plot lines, but then never close them as the story goes on, and at the end, you are left wondering about so much (Yeh, Ok, Let’s NOT start another Star Wars debate ok….), But DuBoff, nicely goes through her story, and tells you things, some just close down storylines, others open up even bigger ones. As with every other book, DuBoff’s Characters are just exceptional in this 4th chapter of the series. Wil is incredible in this book, as the ever powerful Primus Elite, with so much pressure on him to win a war, potentially commit genocide, all to save an entire species, the burden on him is brutal, and you can see, even before the war has begun, the minor stress fractures in his psyche from all the pressure as it mounts. By his side is Saera, his only hope at sanity, and she desperately tries, but will it be enough. In this episode, he adds 20 new characters, his Primus Elites, and it is fascinating watching the relationships that build between each of the 20 Primes and Wil. It is almost as if the Author has had a psychological background as you look at each of the relationships, their interactions, communication, the bonds they build. Wil eventually picks 4 Captains out of the 20 and again, it is very evident to see why through the relationships he builds. This book is a tremendous exploration of Wil and his team, their creation, training, and preparation for the war to come. Throughout, there are some incredible moments dropped in almost as shock tactics, of bits of information that Wil learns about the history of the Terrans that in some cases could almost tear the group apart. It is only Wil’s power that holds them together, his integrity, strength, courage, and sheer determination. This series just keeps getting better and better, as the characters grow, as DuBoff develops the world they live in, giving The Reader more scope, so that you understand how things will fit together for the characters. If you haven’t read this series, you have to, it is seriously brilliant, and is the modern-day version of classics such as ‘The Galaxy Primes’, by ‘Doc’ Smith, and is an absolute must read. Bloomberg continues to provide a gifted narration of this epic story, with clear, concise character voices that are easy to understand. His voices, both male and female, are done with a variety and range of realistic emotions to fully immerse the reader in the story. The Narration is just outstanding, so good so, that I would easily recommend listening to the audiobook rather than just reading the book, you will get more out of listening to it the Narration is that good!! Bloomberg is exceptional.

good book but too short!!!

it was a good continuation of the story but just too short. could have been longer.

Really enjoy this. Easy to listen to, good characters and pace. On to the next one