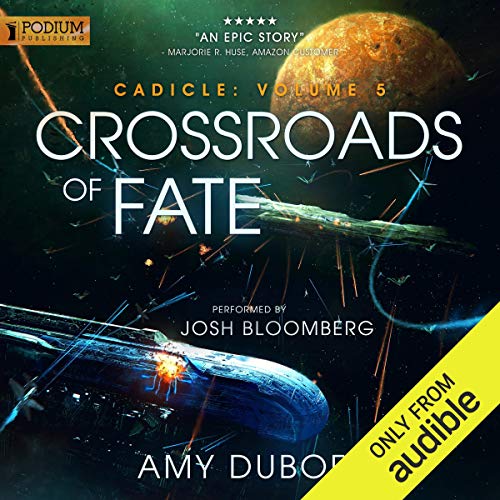 The war's final battles are coming....

With the Primus Elites' training almost complete, Wil and his men relocate to H2 to make their final preparations. Everything seems to be staged for a swift TSS victory over the Bakzen as Wil assumes the position of TSS Supreme Commander with Saera and his most trusted friends by his side.

But Tek won't let the Bakzen go down easily. He will find Wil's greatest weakness and do anything to make him crumble. The generations-old war began as a feud of races and ideals, but, with this fight, it's personal.

Crossroads of Fate is the fifth installment in the Cadicle series. This character-driven novel chronicles the decisive space battles to end the war with the Bakzen so a new era for Tarans can begin.

What listeners say about Crossroads of Fate

I really enjoyed books 3 and 4. This one was a bit slow starting out. It felt like there were portions that were drawn out but it picked up with they were in war. I will still continue on to book 6 to see where they go in the series.

In this volume, the arch villain Tek turns almost cartoonish, and the interplay between him and Will resembles a scene from Austin Powers in which Dr. Evil steals his mojo. The purpose was to create a context for Will's inner conflict but it requires sending his wife out alone and unarmed without a military escort in a war zone, and then glossing over the fact that Tek is going to carry out his dastardly deed regardless of what Will chooses to do. It may have created a necessary context, but it framed Will as unintelligent and weak.

For light Sci-Fi the first two thirds of the book falls in line with all the prior books...then every character in the book seems to have been hit in the head with a hammer really really hard to have caused massive brain trauma.

It's at this point I put the book down...not on a table or shelf...no...the out behind the barn type down.