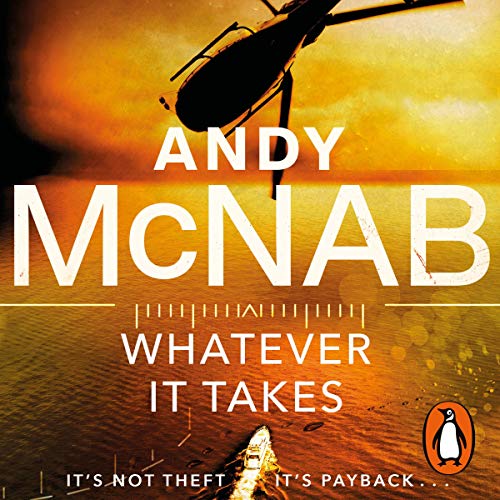 They say before you embark on a journey of revenge, dig two graves.

For James Mercer, the financial ruin of his family by the institutions they trusted can never be undone. It shattered everyone, leaving him with a burning need to right the wrongs they suffered. He will stop at nothing to recoup what they are owed. It’s not theft, it’s payback.

Until his solo crusade falls foul of the very people he seeks to rob - the 1 percenters, the people who own the bulk of the world’s wealth. Soon he is putting together a crew to carry out one last robbery, to undertake one last job. Success will restore his family’s fortunes, but failure will destroy them forever.

Packed with relentless action and the sort of riveting authenticity only Andy McNab can provide, Whatever It Takes tells the story of one man’s extraordinary pursuit of justice against devastating odds, a story as hard and real and controversial as any of today’s headlines, which will show the world as it really is.

I followed Nick Stone for nearly 20 years. Through medical school and through tough times in my own life.

I was absolutely gripped by his journey and "Andy's" writing. To me Nick was the character "Andy" would have been had he gone into a certain line of work rather than becoming a writer and consultant when leaving the special forces.

For the last 2 years I was wondering what had happened to Nick Stone and I had the feeling maybe even Andy who is now nearly 60 himself was going to take Nick's character now that he was also at least in his late 50s.

The book was overdue and it seemed even the publishers and distributors didn't know what was going on given the vague synopses posted on sites like Amazon and Penguin in the run up to last years missed publication deadline (October 2018). When this October rolled around it wasn't until a few weeks before that it even became clear this latest book was about a new character.

Fair play to Andy for giving yet another type of writing a go. HIs "Good Psychopath's Guide" is interesting. All his non fiction titles from Immediate Action through to Seven Troop were great. I never got into the Thomas Buckingham series so I can't comment. The Nick Stone series was so gritty, so grounded in real world tradecraft and plots with a first person writing style that totally immersed anyone who stuck with it.

On the day I gave this book a go Andy was randomly doing a tour right next to where I live and I felt nothing but sadness that he's produced this work and is happy with it. It's complete garbage.

I feel bad saying that about a writer and person I've always admired and taken a lot of inspiration and life lessons from but I can't let any other readers or fans endure this book without having a fair warning. I don't know if Andy has given up caring about what he writes or else has just lost perspective at this point in his life but it's a huge let down for me and for the Nick Stone series. I know this is supposed to be something different but it was marketed in the place of the late Nick Stone book and that is the only reason anyone has followed and bought it.

I would have got in touch with him personally and asked him but he's just not someone you can get hold of directly and not someone who responds on social media. That's always been his style.

Been a fan of McNabs books for over twenty years - this is far below par and if it had been the first I’d read, I’d never have read another.

Paul Thornley made the best of a terrible story

Perhaps I am being too harsh. well narrated but where is the story? Not good.

This was falsely advertised on Audible as a Nick Stone (suspect a credit coming!). It isn’t, a step from what he does best. The Nick Stone series is awesome and i could not put them down. This book is awful. I doubt AM wrote it. The plot is long winded and bizarre to say the least with some strange mistakes in the book which are normally absent from all of AM books. Considering the publicity around this book (TalkSport etc) you would have thought this book would have been a belter. I never thought I would say this about an AM book, but this is one of the worst books I have read. The book also leaves things open for a follow up, if Andy is reading this, don’t bother. Stick to what you are good at because you are very good at that.

A big fan of Andy McNab but not this book

A weak and not particularly believable storyline, this may be ok in some cases but in this one there are few other redeeming features. Definitely my least favourite of his books, not quite finished listening to it and it's been a bit of a slog so hopefully, this is not the start of a new series of books as sadly I'll be giving them a miss.

this is my first book on here. I've read the rest of Andy mcnabs work, this one, not really my thing. then dark winter wasn't either. apart from that worth a listen I got it for nothing for signing up. I prefer to read than listen. thanks anyway.

Weakest McNab book in my opinion

Couple of really weird decisions by the main character that are completely counter to everything we’ve learned about the him and even what he just said a paragraph before. Very jarring and couldn’t get past them for the rest of the book.

It was ok, however, probably my least exciting Andy Mcnab book. . . . .

Hmmmm....this was sort of good!

I started to listen to this and quickly found myself thinking, 'oh for goodness sake' as the worlds richest man picks a special 'Quantity surveyor' come thief to do a job for him. Then he inturn puts together his team of experts...sort of like the 70s A team on telly....anyhow i persevered and found i was quite enjoying the whole thing when finally it got to the last couple of chapters and 'cazham' the plot finally came out. All told quite a clever idea for a book but not one that i am likely to listen to again.

My advice....you can do a lot worse on Audible :) Enjoy

very good read and even better on Audible. most definitely would recommend this to anyone.

Expecting another exciting read from McNab I was very disappointed in this. It doesn’t read like anything he’d written before, not just the topic but the style. I suspect it was ‘ghost written’. I have almost all his previous books and this is the only one to disappoint.

Refreshing change from a McNab book

I enjoyed the refreshing change of this book. Still classic McNab but with new characters and new twists.