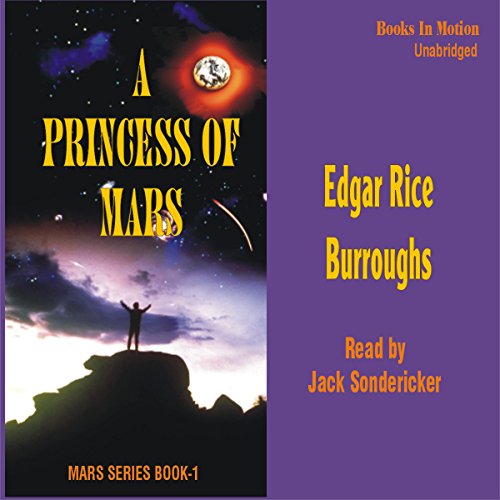 A Princess of Mars

A young Arizona prospector, chased by Indians, takes refuge in a mysterious cave. A strange gas paralyzes him. His spirit leaves his body and travels to Mars where he becomes a warrior.
©1912 Frank A. Munsey Company (P)2004 Books in Motion

A Classic of Action Fantasy

This isn't science fiction, since there's absolutely no scientific basis for any aspect of the story--the space travel, the physiology of some of the alien races, the ability of a human being to produce offspring with a humanoid whose reproductive process involves laying and incubating eggs (but it was written in 1917, so I'll cut it some slack on its lack of genetic verisimilitude).

Despite some silliness in the underlying premise, once Our Hero arrives on Mars, the sociology, technology, and theology of "Barsoom" that is revealed over the course of this and the next two books of the trilogy ("Gods of Mars," "Warlord of Mars") is fascinating, and a great example of what I believe fantasy authors today call "world building." As sheer fantasy/adventure, this Burroughs trilogy, like the more famous Tarzan series, is a prototype. John Carter, southern gentleman and adventurer in the post-Civil war era, is an Indiana Jones type, and if his mode of transport to Mars is not particularly realistic, it is certainly dramatic.

This book is, as mentioned, the first of a trilogy. "Princess" and "Gods" both have good old-fashioned cliffhanger endings, with everything wrapping up in"Warlord." Other titles in the series are spinoffs.

There are several narrations of this book available on Audible, and I sampled all of them before choosing Jack Sondericker's. He did a splendid job, and I'm sorry he didn't narrate the other two books. I note he narrates the "Left Behind" series and a number of Westerns; those who listen to "Princess" will probably see some logic in this.

The Mars Series is the father of most modern science fiction writers. You will see Star Wars, Star Trek, and Stargate throughout the series.

Overall, this is an excellent book, and I intend to enjoy the entire series. The book itself is very well written. Others have commented on Edgar Rice Burroughs' "flowery" language, and I definitely agree. Listeners have to understand that this book is almost 100 years old, and yes language has changed somewhat in those years. This only adds to the story.

Jack Sondericker offered a good performance, and was a good narrator for John Carter, although there are regular unnecessary mid-sentence hesitations in the narration (you'll see what I mean). Audio quality is an issue: it sounds like it was recorded on a 1980's Sony Walkman. The production team has done a commendable job of remastering the audio and reducing clicks and distortions, but it's still very poorly recorded. However, it doesn't detract from the book too heavily.

If you could sum up A Princess of Mars in three words, what would they be?

I loved Burroughs' creativity and his ability to create a clear picture of something completely otherworldly.

Yes - I listened during every spare moment!

Would you consider the audio edition of A Princess of Mars to be better than the print version?

I would say that the audio is on par with the book....but I think that is subject to a very individualistic view.

the overall premise and the well thought out world of, and life on Mars.

very well done, the best of the readers that I've heard in the Mars series

A story that is out of this world

The rich language of a bygone time. Pure action and heroism. The good guy gets the girl and then separated. Can't wait for next installment. Read well. Not great, but certainly enjoyable.

Where does A Princess of Mars rank among all the audiobooks you’ve listened to so far?

this is a interesting story. I found the reading a bit slow and thus made it hard for me to stay focused. overall, worth the credit!