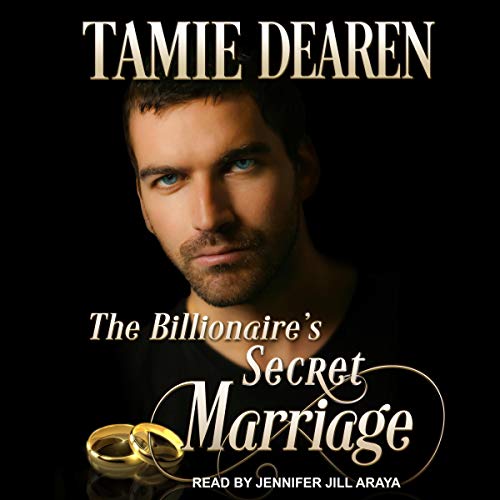 Stephanie Caldwell made the worst mistake of her life...she fell in love with her boss.

Steph doesn't care that Bran is totally blind - at least he'll never notice the longing looks she gives him. If only she could warn him about the lack of love on his conniving fiancee's face. But Steph has to keep her mouth shut, or she could lose her job, along with the health insurance that keeps her daughter alive.

Billionaire Branson Knight knows women regard him as a pitiful blind man, his wealth his only attraction. So his engagement is merely a means to an end. But the last thing he wants to end is his relationship with Stephanie - he depends way too much on his efficient personal assistant.

Can Stephanie stand by while Bran's devious fiancee coerces him into a quickie marriage? Or will she lose her temper...and everything else along with it?

What listeners say about The Billionaire's Secret Marriage

WHAT IT'S ABOUT
Stephanie Caldwell made the classic mistake… she fell in love with her boss.

The fact that Bran is blind makes no difference to Steph—she thinks he’s the most handsome man she’s ever laid eyes on. But she can’t quit--she needs this job to pay for her daughter’s medical treatment. To make things worse, he just got engaged!

Billionaire Branson Knight is pragmatic about his love life. He knows women don’t see him as a man, but as a blind person, worthy of pity. His only value lies in his wealth. So his engagement is merely a means to an end. But the last thing he wants to end is his relationship with Stephanie--he’s become dangerously dependent on his efficient personal assistant.

When Bran’s friends drag him off to Las Vegas, he convinces Steph to go along, to prevent him from panicking in the noisy, crowded environment. His fiancée, however, sees the trip as the perfect opportunity to coerce Bran into a quickie wedding. Steph and his friends are determined to prevent the disastrous union.

MY TAKE
I thought I'd already reviewed this when I read it the first time. I loved this then. But, since then I've read all four books in the series and this time I listened to the just released audiobook. It was even more fun then because I now know Bran's friends. It was such a delight to see them again. I love their teasing joviality--and patience-- with Bran as they try to help him find himself again.

The story is full of twists and turns and romance is sizzles while staying a clean read. The narrator did a fabulous job!

Love this story. Very romantic, well written and the performance was well done. Hoping for more stories from this author.

A story that touches your heart!

Bran and Steph have a connection that is irresistible! A book you will enjoy over and over!