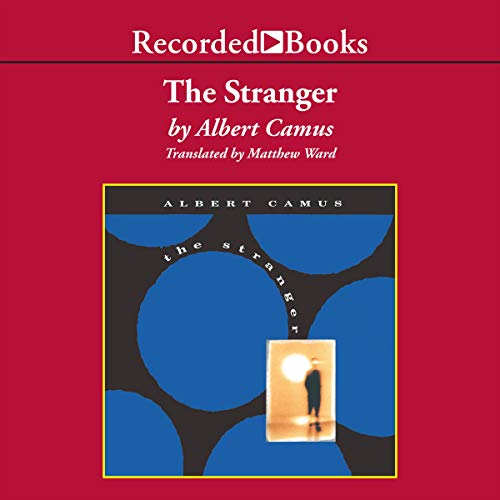 With millions of copies sold, The Stranger is one of the most widely read novels in the world. It stands as perhaps the greatest existentialist tale ever conceived.

When a young Algerian named Meursault kills a man, his subsequent imprisonment and trial are puzzling and absurd.

This remarkable translation by Matthew Ward has been considered the definitive English version since its original publication.

What listeners say about The Stranger: International Edition

The only negative point in the book was that , I so wished it went on and didn't end!!
My first attempt at reading Existential/Absurdist Fiction .

Many claim it to be overrated but I guess you've to go through something similar at least to understand the depth of this wonderful book. Not for all

Philosophy is more important than story.

Philosophy about life and work of words better put together. You will definitely think deep after reading NoT listening.

It is high time, to start criticism of this overrated book and the social capital that comes along with it. Overall very dull story with easy to predict themes, certain conversations were good enough to save the story from turning into a utter disaster. Character development was praiseworthy.

The narration keeps the essence intact!

It is somewhat understood that only seasoned readers of philosophy who are more or less aware of Camus' works would come to listen to this. I was very happy to discover that the narration keeps the mood and essence of the book intact.

We remain strangers to ourselves

The great French author &philosopher, Camus, whose big fan I am, tells how the life has no meaning, it is absurd to find any meaning and the whole life, one remains a stranger to oneself!
Worth a reading, meaning listening to!!!

one of my favorites ever

deep, subtle, engaging, thought provoking, daring and free of dogma. All necessary ingredients for me

Reminded me of candide by voltaire. Highly recommended. Easy and short to read and with dosage of philosophy

My first step on the journey of philosophy and it has not disappointed, you will love this book I promise.

I'm not a huge reader, but I've never read anything like this. The book opens with such a sympathetic situation, but the main character's thoughts are so unrelatable.

I found it beautiful and weirdly life affirming.

Don’t be a stranger to this book

Really Interesting book, great ideas and Enjoyed the summary of Camus’s philosophy at the end

Murder ? I hardly know her

An absolutely stunning, and short, story about how to tell someone you don’t love them.
And some other important messages about the tentativeness of our mortality or something - I don’t know.
Worst romance arc of the century (sorry Camus). 5/5

Decent story, well enough narrated, but I was really annoyed by how the chapters were broken up in the audiobook with no regard to the actual flow of the story. As I wasn't going to listen in one sitting, it would have been useful if there was any correlation between the audiobook chapters and the book chapters instead of just breaks at random points, the actual story ending 6 1/2 minutes before the end of the fifth chapter, etc.

Pet peeve perhaps, but it got my goat because it made it harder to plan listening time.

Maybe I'm a philistine but I just don't get what all the fuss is about.
An average novella with a bit of philosophy thrown in.
When you need an extra 30 minutes at the end for two academics
to tell you what it means and why it is so good you realise why
so many people feel they should read it.
Its cited as one of the best existentialist pieces of writing there is,
The author however hates it's existentialist label

Absurdity as it is

Excellent narration that just brought me back to to my youth. and I agree with the whole absurdity of evolutionary fate

A sickening story... probably more of a metaphor and a warning to the French than an individualistic existentialist morality play... Unhinging and depressing ... You'll feel a need to redeem yourself after reading this... to distance yourself from the character...

A deeper understanding of humanity

In crafting the simplistic and the morally ambivalent, we get to reflect on our own values.

no....just no ... animal torture is not endurable for me ... and your requirement for me to write more is also inhumane

The most memorable segment was his narrative whilst in his prison cell when a day could be both long and short.

over rated and over analysed not nearly as interesting or profound as made out to be by an army of pretentious philosophy major's.