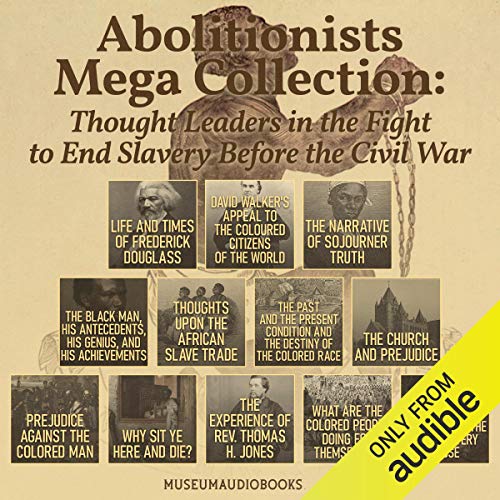 Abolitionists Mega Collection: Thought Leaders in the Fight to End Slavery Before the Civil War

Abolitionists Mega Collection: Thought Leaders in the Fight to End Slavery Before the Civil War includes:

Book 1: Life and Times of Frederick Douglass, which covers the life of the prominent abolitionist during and after the Civil War. Douglass provides a fuller account of his escape from slavery and the underground railway to freedom.

Book 3: The Narrative of Sojourner Truth. An autobiographical narrative that chronicles Sojourner Truth’s life as a slave in upstate New York and her transformation into an abolitionist, women’s rights activist, orator, and preacher.

Book 4: The Black Man, His Antecedents, His Genius, and His Achievements. Born a slave, William Wells Brown (1814-1884) escaped to the North, where he became a prominent abolitionist, historian, novelist, and playwright. His 1863 book portrays the lives of individuals selected by Brown that had “by their own genius, capacity, and intellectual development, surmounted the many obstacles which slavery and prejudice have thrown in their way, and raised themselves to positions of honor and influence".

Book 5: Thoughts upon the African Slave Trade. John Newton was the master of a slave ship, later becoming a beloved Anglican priest and an ardent abolitionist.

Book 6: The Past and the Present Condition and the Destiny of the Colored Race. Henry Highland Garnet was an African American abolitionist whose "Call to Rebellion" speech in 1843 encouraged slaves to rise up against their owners.

Book 7: The Church and Prejudice. Frederick Douglass would eventually become one of the most powerful orators of his day. In 1841, three years after he had escaped from slavery and settled in Massachusetts, Douglass delivered a brief oration on something he had not anticipated: racial prejudice in Northern churches.

Book 8: Prejudice Against the Colored Man. Rev. Theodore S. Wright (1797-1847) was pastor of the First Presbyterian Church in New York City and a conductor on the Underground Railroad. In this speech Wright described anti-Black prejudice as nefarious and wicked and something that should be reprobated and discountenanced.

Book 10: The Experience of Rev. Thomas H. Jones. The author, who was born a slave on a plantation near Wilmington, North Carolina, discusses the religious meetings he conducted as a slave.

Book 11: "What Are the Colored People Doing for Themselves?" In this speech of 1848, the great abolitionist Frederick Douglass makes an eloquent call for self-reliance.

What listeners say about Abolitionists Mega Collection: Thought Leaders in the Fight to End Slavery Before the Civil War

The contents are all great, riveting stories of oppression and struggles for freedom. The only qualm I have with the content is Douglass’s 3rd volume doesn’t add much to his biography, its more about setting the record straight with his detractors.

I gave the performance 4 stars because while usually the narrator does a good job, there are some nagging mispronunciations through all the books and every time I would hear the same word mispronounced it detracts from the story. There are also some editing flaws where you can tell the narrator had to start over but they didn’t cut the audio properly so he repeats himself. A more polished production would have made sure the editing and pronunciations were correct.