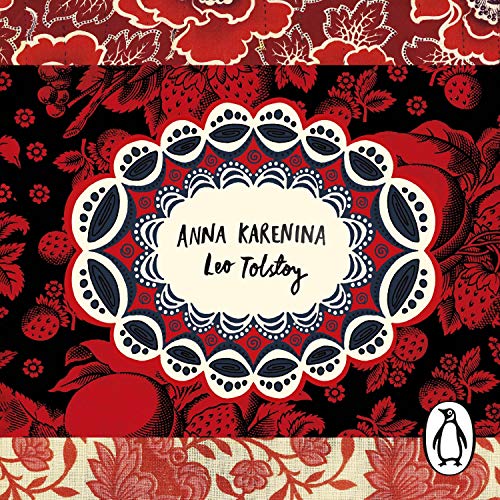 Translated by Louise and Aylmer Maude.

Anna is a beautiful, intelligent woman whose passionate affair with the dashing Count Vronsky leads her to ruin. But her story is also about a search for meaning, and by twinning it with that of Levin, an awkward idealist whose happy marriage and domestic trials form the backdrop for a similar quest, Tolstoy creates a rich and complex masterpiece that has captured the imagination of readers and listeners for decades.

The Vintage Classic Russians Series: Published for the 100th anniversary of the 1917 Russian Revolution, these are must-have editions of six epic masterpieces that have survived controversy, censorship and suppression to influence decades of thought and artistic expression.

"One of the greatest love stories in world literature." (Vladimir Nabokov)

What listeners say about Anna Karenina

Thank you for correcting the translation mistake.

This version is Louise Maude and Aylmer Maude's translation and it is very good! Translations in Russian literature are vital so thank you Audible for correcting the translation mistake right away (this was previously listed as Richard Pevear and Larissa Volokhonsky's translation).

Tamaryn Payne is the best reader I’ve ever encountered. Truly made a great book even more magnificent.

A brilliant performance by narrator Tamaryn Payne. I was extremely moved by many of the passages and how they were portrayed. Well done.

It was a relief to read and to now be over

really lost interest in the book quite early on, it's simply too long for my tastes

This is the Maude translation which I read along with this audiobook after giving up on the Constance Garnett translation.

I'm glad to have had the company of Tamaryn Payne's beautiful voice bringing one of my new favourite novels to life.

The inner dialogue of characters is so important in Anna Karenina and Tamaryn Payne seemed to capture every emotion and struggle that they each went through.

The only aspect she falters on slightly is her narration of male characters, which sounded slightly humorous to my ear, especially when there are two or three male characters having a conversation, I found myself laughing on a few occasions. Though it should be said that Oblonsky and Levin are quite funny and endearing characters, and I never at any point found the performance irritating. All the female characters she narrates perfectly and you feel attached to every aspect of their humanity and their fates.

I would highly recommend this audiobook.

Explores human emotions and philosophy quite well in this entertaining story.

And Tamaryn Payne has perhaps found her calling as a narrator! To my ears, at least, her voice had the perfect tone and accent for this novel and a lovely sound, and her characterisations were excellent.

This is a compelling story suffused with rare psychological insight. The translation is by the Maudes who spoke perfect Russian and consulted with Tolstoy personally. The narrator, Tamaryn, does an excellent job of voicing both male and female characters, giving distinct voices to important characters, and most importantly she lives the story instead of just reading text. Fantastic refurbishing of a classic masterpiece.