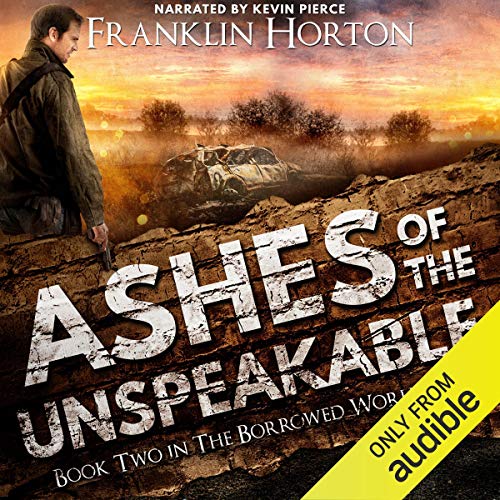 Ashes of the Unspeakable

In The Borrowed World, Franklin Horton showed us an America brought to its knees by a nationwide terror attack. The target? The American infrastructure.

Cell phone connections were sporadic. Electrical power was failing. Mortar attacks on major fuel refineries had created a gas shortage, stranding travelers throughout the country. One of those stranded travelers, Jim Powell, and his group of coworkers were frantically trying to make their way home using the gear on their backs and whatever other means they found at their disposal. It was a journey racked with violent, deadly encounters and exhausting physical demands, pushing each of them to the brink of their abilities. Meanwhile, on the other side of Virginia, Jim's family was facing its own struggle as desperate neighbors began to turn against each other with increasing brutality.

In the second book in this series, Ashes of the Unspeakable, we find Jim and his group still struggling to reach home. While just a few days have passed since the initial attack, the group finds that its country is quickly descending into a vicious, chaotic landscape where nothing comes easy. While they fight to close the distance between them and their loved ones, they cannot avoid the steadily growing number of people who have realized that they can get away with whatever they want in a world where there are no longer any legal consequences for their actions.

At home, Jim's family is basically forced into lockdown after a local jail discharges its starving inmates, leading to the arrival of a new, extremely violent presence in their valley. The stranger sets his sights on driving other families from their homes and taking what they own. As Jim races home, his wife Ellen struggles to keep her family safe, while each night a neighbor's home is burned to the ground.

What listeners say about Ashes of the Unspeakable

GET HOME BAG
This was an excellent book 2. I liked book one, a slight bit better. I am usually disappointed with the second book in most series, but not in this case. The professional writing and exciting story continues. Added are questions about what happens to prisoners and mental hospitals during times like these. How will groups like the Amish be affected? In this installment, Jim's boy Peter grows into a man. The prologue and chapter one, do an excellent job of covering the first book, so if for some reason you can't listen to book one first, you will not be lost.

MOVIE AWARD SHOWS
The main character, Jim, is not the most politically correct. Like most books like these there is the very conservative, gun rights, anti-welfare comments. There are some conservative lectures, thinly disguised as discussions and there are plenty of I Told You So, incidents. He tries to cover his anti-trailer park remarks late in the book. The book is very entertaining with lots of information and has motivated me to get prepared for the next ice storm.

I will continue this series.

better and better with more thrill and horror

Ashes of the Unspeakable is a great and wonderfully continued second book in The Borrowed World series, the stories get better and better with more thrill and horror. As its set in the post apocalyptic world, the conditions seem to be getting worse as much as it gets difficult to find people to help you. The second book gives you more perspective in of the growing horrors of the world that’d make you pray to not see yourself in such a mess.

“Get Home” is the only mantra that is helping Jim to continue his journey from his friend’s place back to his home, along with him Gary and Randy are on their way hoping to reach to their families safely. This time there are more than two stories interspersed, each one equally terrifying. Ellen, Jim’s wife, is going through immense pressure to keep her kids safe with the help of Pops and Nana (Jim’s parents), with this comes an additional burden on her shoulders when she sees each of her neighbors houses being burned down. The world is in so much chaos with hardly any food supplies that the local jail releases its inmates, one of whom, happens to reside beside Ellen’s house. On the other hand, from the previous book in the series, Alice and Rebecca have realized brutal truth while waiting in the FEMA camps and face a terrible journey on their own.

The second book tries to summarize or gives you bits and pieces of information from the first book in the very beginning, but to enjoy this to the fullest, to understand the intensity of the situation and the nature of the people involved, it would be highly recommended to go through the first book. Although the structure and stories would grow independent of each other after a couples of hours into the book, they’d keep you engaged and at times make you stare in thrill, to wonder where this story will take you.

The narration by Kevin Pierce was like the previous book was excellent, there wasn’t much variation in the voices but it didn’t feel missing. The narrative style was clear enough to know who’s talking and besides there were adequate characters to avoid any confusion, yet spice up the story with each one’s unique behavior. Production had no issues.

Audiobook provided for review by the author.

[If this review helped, please press YES. Thanks!]

Would you try another book from Franklin Horton and/or Kevin Pierce?

Yes, I am planning on finishing this story.

If you’ve listened to books by Franklin Horton before, how does this one compare?

This is the best writing Horton has done so far.

What does Kevin Pierce bring to the story that you wouldn’t experience if you just read the book?

Pierce's voice is comforting and brings an "every-man" quality to the story.

Did Ashes of the Unspeakable inspire you to do anything?

It inspired me to finish the story and to read book 3. I really wasn't giving much hope to this story after book 1 but thought I would at lease try book 2 and I am glad I did.

I was pleasantly surprised with this book and am really looking forward to finishing book 3. As with my first review on Horton's books though he still needs to work on his timing doing more storytelling and less cataloging. Some of the best disaster books I have read (Alas, Babylon, One Second After, etc.) don't get lost on who is carrying what. For example if you are talking about a generator call it a "portable gas powered generator" and move on instead of calling it a "Honda EU2000I 2000 Watt Inverter Generator with a modified steel beam welded cage surrounding the housing preventing it from electrostatic discharge..blah, blah, blah".

By far, the most realistic EMP/Preppers novel to date. For a female (ME) it has opened my eyes to areas I haven't thought of as an early preppar. Can't wait for next volume.

for me this is the best book on audible. especially because of kevin peirce. he does a wonderful job of narrating this book....hopefully there's a book 3 all the way to book 10.

Must read for peppers and regular folk so you can harden yourself for a societal breakdown. Well read.

This book is fast -paced, exciting and vividly descriptive. I enjoyed the narration. It is a wonderful tale; hopefully not a prophetic tale.

Would you listen to Ashes of the Unspeakable again? Why?

What other book might you compare Ashes of the Unspeakable to and why?

This is not an actual apocalyptic...its kind of a post terrorist attack on the USA scenario that we will never be prepared for...making the electric grid fall and kind of stopping everything...so you know people would be freaking out!

Have you listened to any of Kevin Pierce’s other performances before? How does this one compare?

I enjoy Kevin...he is very easy to listen to...I just naturally fall under his story spell...and before I know it, I am almost all the way through the book!!!

Oh gosh...there were definitely some sad and scary scenes in this book....I felt so bad for Jim's parents...and his Dad was so brave when he found his wife was taken....and Jim is my hero!!!

I was generously given a free copy of book one to listen/review and I loved it! SO when I saw book 2, I had to have it! This continues where book 1 left off and our weary travelers go on one hell of a journey! Jim finally makes it home to find out there is a bit of a situation with his mom and son, and a psychotic neighbor....but he gets there in the nick of time...but things are very dangerous all over and his friends are going to need help..and Poor Alice....SMH...I just hope things turn out ok for her...but it is looking dire!

On par with Home Series

What made the experience of listening to Ashes of the Unspeakable the most enjoyable?

What was one of the most memorable moments of Ashes of the Unspeakable?

Too many to list...the whole journey

Have you listened to any of Kevin Pierce’s other performances before? How does this one compare?

Cannot wait until the next book!

This is a great series. The characters the story and the narration. I hope the series continues soon

I thoroughly enjoyed this book. It was better than the first book I think. There was plenty of action and I'm looking forward to book 3!

If you like disaster and survivalist book's this is one for you. buying next now.

Probably the only book to make me exclaim "What are you doing!" - the only problem being i was in the middle of Sainsbury's at the time.

I've read this before, early on when I first started reading survivalist stuff and have just gone back and read it again as I think it is up there with my top favourites. might even be my number one favourite, maybe. I've read more than 200 books by many different authors and though with some, even some of my favourites, there are annoying characters that grate on you when you are supposed to love them or niggly annoying blips from the author like male writers forgetting the existence of emotions in their female characters, with this though, there was nothing. nothing niggles me and nothing was out of place. Some of the narrator voices can ruin a book but this guy, he makes the characters 3D and gives them even more layers. Fav author me thinks and fav narrator.

Will definitely get the next instalment of this series. Enjoyed this as much as the first book.

Love it. A preper going through the apocalypse :)
A bit cheese with the little boy killing people left and right :)

Loved it as much as book one. The dog got longer walks so that I could keep listening.