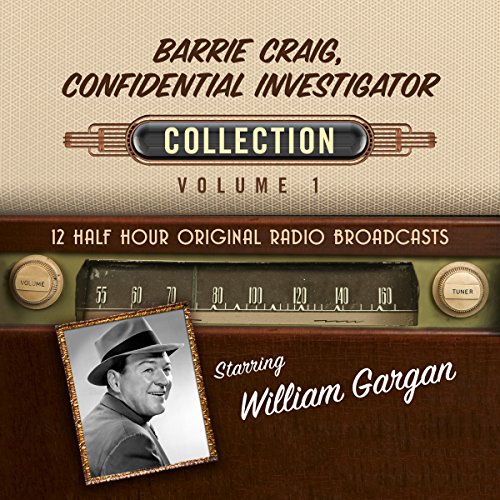 Initially launched as Barrie Crane, Confidential Investigator on NBC in 1951, the series soon made a name change to Barrie Craig, Confidential Investigator. It starred movie and film veteran William Gargan as hard-boiled New York-based private eye Barry Craig. Gargan had been playing Martin Kane, Private Detective on both radio and TV. In the summer of 1951, Gargan cleared the decks for his role as Barrie Craig. Gruff, blunt and sardonic but with a good sense of humor, Gargan was perfect for the genre and in the role of Barrie Craig. He was handsomely paid too - Gargan’s reported contract paid him $1 million for 5 years. The writers of the series were radio’s best, including Frank Kane, Ernest Kinoy, Louie Vittes and John Roeburt. Directors included Edward King, Himan Brown, Arthur Jacobson and Andrew C. Love. Barrie Craig officed on the 3rd floor of the Mercantile Building on Manhattan’s Madison Avenue and took on cases too tough for police. He was fiercely independent, sardonic and doggedly persistent in his search for a killer. The supporting casts read like a who’s who of New York’s finest voice talent including: Santos Ortega, Elspeth Eric, Joan Alexander, Parker Fennelly, Arnold Moss and Luis Van Rooten. Don Pardo and Ed King did the announcing. It enjoyed a successful run, lasting until 1954.