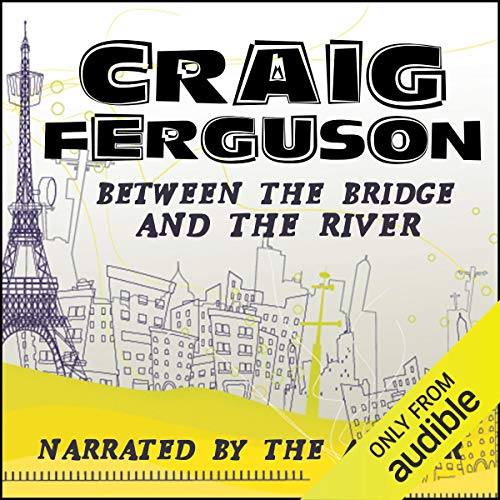 Between the Bridge and the River

Two childhood friends from Scotland and two illegitimate half-brothers from the deep South suffer and enjoy all manner of bizarre adventures that, it turns out, are somehow interconnected and, even more surprisingly, meaningful.

The eclectic cast of characters features Socrates, Carl Jung, and Tony Randall, along with an ex-television evangelist with a penchant for booze, prostitutes, and uncomfortable knitwear who gets mugged in Miami by an almost pure-blooded Watusi warrior - and sets off on a road trip in a stolen motor home.

Where does Between the Bridge and the River rank among all the audiobooks you’ve listened to so far?

It ranks near the top. When I finished it I 1) told everyone I knew to get it on audio, and 2) wanted to listen to it again. I was that impressed by the story and narration.

What other book might you compare Between the Bridge and the River to and why?

"Fool," by Christopher Moore. "Fool" is another almost shockingly crass story with heart. In my opinion for lewd humor to work it needs a touch of nuance, something that many humorist of that type lack. Moore and Ferguson, however, have the ability to shock you one moment and make you tear up the next. It's a tough thing to do using language that'll make a sailor blush.

What does Craig Ferguson bring to the story that you wouldn’t experience if you just read the book?

His delightful Scottish brogue and his passion and enthusiasm for the characters he created. Ferguson is a terrific storyteller and his narration is full of life and energy. It would be a very good book to read, but it is a great book to listen to.

It's not very often than I laugh out loud when enjoying a book, but this one did it for me several times. If you are easily offended by language or sexual themes, then this might not be for you. It's what you would expect from a late-night comedian. Ferguson takes aim at several deserving targets, including Hollywood and televangelists. No race, religion, or nationality is safe. While having a good time with us, the author asks serious questions about life and death, religion, sexuality, marital fidelity, and human gullibility.

Unlike some authors that have read their own work, Ferguson does an outstanding job. This is as you would expect, since his is an entertainer. Some books make better audiobooks than others. This work jumps from protagonist to protagonist and location to location without immediately obvious ties. You have to follow closely and remember the characters from earlier scenes. I wouldn't listen to this one when distracted, or you might get lost.

I didn't see the tremendous depth that some reviewers claim to find, but I had a really good time.

Hearing this book read by the author enhanced the experience. I was transported into the world of the story and into the mind of Mr Ferguson. After waiting several years for the audiobook version, I was very satisfied with the result.

As Funny, Crazy & Sweet as Craig Ferguson Himself

What did you love best about Between the Bridge and the River?

I've been a fan of Craig Ferguson's for more than a decade and I loved how much this book embodies his style, his humour, his experiences and his talent. I've previously read his autobiography and loved it, but finally chose to listen to the audiobook of Between the Bridge and the River. I was not disappointed!!! It is a crazy, psychadelic, coarse, but touching story full of religion, psychology, Hollywood cynicism and most of all hilarity! It's not for the easily offended and some will find it crude, but Ferguson's delivery and storytelling, as well as the brilliant writing style and story, made this book a ride I didn't want to get off of!! My only regret is that he hasn't written any other novels for me to start now!!!

What was one of the most memorable moments of Between the Bridge and the River?

Without a doubt - and this is a small spoiler - the near death experience of one of the characters, which takes him on a dream/trip to a kind of purgatory. There, he encounters the poet Brinsley, HP Lovecraft and the poet Virgil, who takes him through his own version of Dante's Inferno, which is a dry desert with some fake cactuses and a cardboard cut-out of a camel wearing sunglasses. Later, he meets back up again with Carl Jung - who he oftens encounters in regular dreams - and then finds himself in the trenches of Belgium during World War I. It's a hilarious, complex journey and probably one of the most memorable scenes of any book ever.

Which character – as performed by Craig Ferguson – was your favorite?

The flamboyantly gay poet Virgil!! I literally giggled the entire time he was speaking! However, Ferguson's portrayal of Carl Jung is also amazing. Love love love!

Wow- this had me laughing out loud so many times, yet the story is so poignant and compelling. Truly amazing and awesome and SMART work both in the story and the storytelling. The author does a fantastic job in narrating his wonderful story. He is very entertaining in making his point, yet he keeps his point simple and makes his point incredibly well while making you laugh. Brilliant work.

Moments of brilliance, but mostly a mess

I love Craig Ferguson and will still watch his show, but this book should never have been published. It needs a very good editor and at least another year of hard work. The beginning is the best -- there are many moments of insight and laugh-out-loud comments. Unfortunately, the storyline lacks direction, is hard to follow, and therefore becomes boring. Also, the crass language and focus may be acceptable to many, but they are not funny either, and do not add much to the story. It is hard to write a comic novel; Ferguson's characters need more depth so that the story is not just a list of humorous events. Ferguson is definitely a story-teller, but possibly taking on a novel was too much.

I’m into much of a hurry to write a great review, But I loved it

Except to say this was a great book. I loved it I love you I love your mind I love your storytelling I love your sincere loving people I love you. Yes I’m not proofreading. I don’t have my glasses on. I hope I was able to compare how much I loved this book.

Absolutely...you'll learn something... a lot! :) But put your 'prim' on the shelf for the duration.
Narration is more than authentic.. it's the author... a professional storyteller!

The surprises, humanity, intelligence, galloping adventure, ... romance... and all the rest ;)

Have you listened to any of Craig Ferguson’s other performances before? How does this one compare?

Enjoy your time with a charming, passionate, brilliant, erudite mind that has experienced more of the up and down than most ;)

What disappointed you about Between the Bridge and the River?

There was no cohesive story line between the characters-after their teens they never meet and rarely think of each other-no impact on each other's lives. I love Craig Ferguson as a narrator and there are definitely funny bits, but the funny bits rarely have any (ANY) impact on the overarching story line (probably because it doesn't exist).

could not get into the story, quit listening

What could Craig Ferguson have done to make this a more enjoyable book for you?

not sure, maybe i didn't give it adequate time but it seemed dark and I wasn't in that kind of mood. I wanted something light and funny

Did Craig Ferguson do a good job differentiating all the characters? How?

sadness and I was disappointed because i really enjoy Craig F's show and especially when he led the Boston Pops on a PBS special...I lke his sense of humor but that was missing

If you like Marquese and Bulgakov you will love Ferguson. The characters are very much a live and they are delivering intelligent and funny existentialist discussion.
Authors narration positioned me in the middle of the plot with authentic tone and dynamic off all the characters.