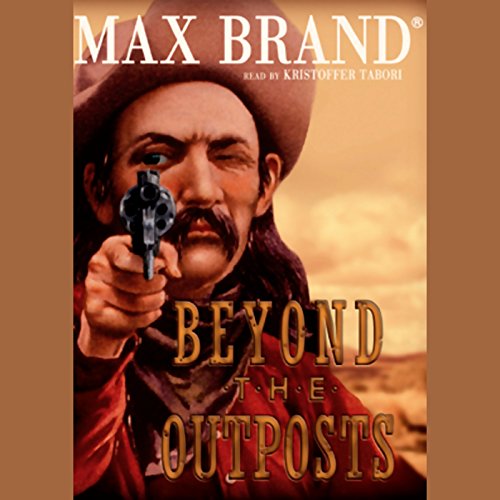 From pre-Civil War Virginia to the prairies of the far west, this epic follows young Lew Dorset as he journeys in search of his father.

Lew's skill with firearms gets him a job as a hunter with a trader heading onto the prairies to barter with the Indians. There he meets young Chuck Morris, and together they take on a Cheyenne attack party. Finding shelter in a Sioux village, they absorb the native culture. Lew comes to know the great Sioux chieftains, becoming blood brothers with Sitting Wolf, while Chuck marries the beautiful maiden Zintcallasappa.

After Lew plays a decisive role in a battle between the Sioux and Pawnee, he returns to find that Chuck has deserted his wife and son. His attempts to reconcile them culminate in great danger and, ultimately, a threat to his life.

What listeners say about Beyond the Outposts

I picked this book because I had to use my ten dollar credit before it expired, and I hadn't listened to a Western story in years. Just looking for a change of pace, and a fairly quick listen. I made a great uninformed choice . . . I had not read anything by Max Brand, nor listened to any narration by Kristoffer Tabori. The story is very good and pulls you in like any other well crafted tale. However, this story is ment to be read out loud. The combination of Mr. Brand's story and the wonderful rich Western base of Mr. Tabori is magic. This is what you hope your experience of listening to Audible books is like! Get this book - even if you don't consider your a follower of Western's (I don't), you will enjoy this adventure.

I enjoyed this book. I listen to a book a day at work, (benefit of being self employed). its started out so-so but picked up as it went on. I loved it

This was one of the best stories I've listened to so far with Audible. To the Writers credit the story was fantastic and the Narator was the perfect choice. From the second track I was hooked and couldn't lay it down. EXCELLENT!

What made the experience of listening to Beyond the Outposts the most enjoyable?

Many of the old stories from the early 1900's are too dated even for fans revisiting an old book. This story was not like that. Of course, it is over 80 years since it was published I think. It is dated, simplistic and predictable like any of those old westerns, but not to the point that you can not enjoy it still.

The narrator succeeded in making the story painful to listen to. Way over the top dramatization that had more the flavor of an actor reading for a part in a play rather than a narrator reading a book.

I am a total lover of westerns and have read most of Zane Grey and Louis L'Amour. This book is totally awesome and sometimes the reader can make or break an audio-book. This reader was incredible. You will never hear more emotion from a reader than this one. It all gave the book such incredible color. I am enjoying several of Max Brand but this is so special and due to the narrator. Enjoy it and I highly recommend it.

This narrator is awesome

Narrator is so passionate in his narration, I feel like he is telling the story around a camp fire and like he was really there. I read this book as a teen. What an excellent action-packed story.

Great story, I felt like I was there as the story was told, held my interest throughout.

Gave up on it

I can’t recommend this book to anyone. I recommend you avoid it. It started out okay but just droned on.