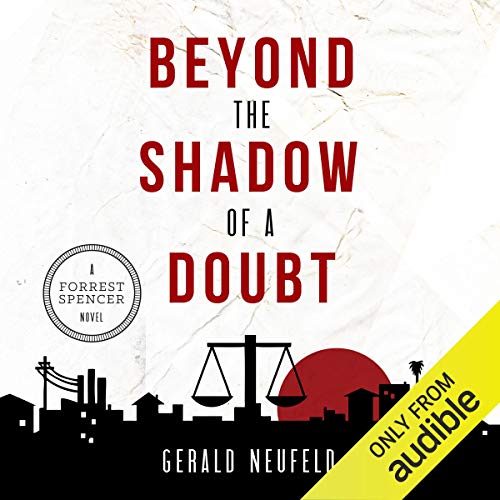 Beyond the Shadow of a Doubt is, at first glance, a legal thriller in which figures a detailed account of a trial for an innocent young man's life. But, unlike most books of that genre, the novel may be said to be more character- than plot-driven with color and much attention to the family lives of the attorney and the defendant. Though not overtly stated, the thrusts of the book are two - the inherent defect of a prosecutory system that foresees the occasional execution of the wrong person, and the vagaries of chance that, without warning, can embroil us in a struggle for our lives.

Listeners who enjoy this audiobook will be those who want to know more than superficial aspects of the lives of the characters in the book, those who desire to feel as though they're present in the places they read about. In this audiobook, we listen to three gifted narrators, each conveying the thoughts and feelings of the main characters in the novel. We hear the anguish of Miguel who, wrongfully imprisoned and fighting for his life, longs to be with his wife and baby daughter. We live with Forrest, Miguel's defense attorney, and his wife and twin children who are vital to him; and we vicariously experience, through the talented voice of an actress, the growing pains of a sheltered young woman whose actions are critical to the story.

What listeners say about Beyond the Shadow of a Doubt: A Forrest Spencer Novel, Book 1

Gerald Neufeld is an excellent writer. His books are packed with great stories and fascinating legal strategy. I will read more of his novels.

I have but 2 small complaints: First, the author seems to have a small ax to grind with Christianity as he usually portrays Christians poorly. And secondly, there is some unnecessary sex. The details of Forest's sex life for example do nothing to further the story.

Even with these 2 concerns I love these books and will read more and recommend them to my friends!