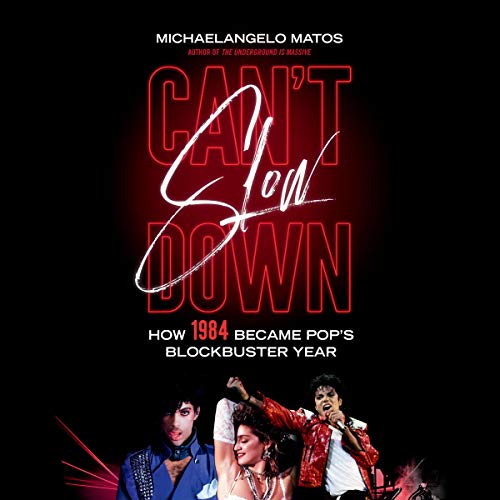 The definitive account of pop music in the mid-80s, from Prince and Madonna to the underground hip-hop, indie rock, and club scenes

Everybody knows the hits of 1984 - pop music's greatest year. From "Thriller" to "Purple Rain", "Hello" to "Against All Odds", "What's Love Got to Do with It" to "Wake Me Up Before You Go-Go", these iconic songs continue to dominate advertising, karaoke nights, and the soundtracks for film classics (Boogie Nights) and TV hits (Stranger Things). But the story of that thrilling, turbulent time, an era when Top 40 radio was both the leading edge of popular culture and a moral battleground, has never been told with the full detail it deserves - until now.

Can't Slow Down is the definitive portrait of the exploding world of mid-80s pop and the time it defined, from Cold War anxiety to the home-computer revolution. Big acts like Michael Jackson (Thriller), Prince (Purple Rain), Madonna (Like a Virgin), Bruce Springsteen (Born in the U.S.A.), and George Michael (Wham!'s Make It Big) rubbed shoulders with the stars of the fermenting scenes of hip-hop, indie rock, and club music.

Rigorously researched, mapping the entire terrain of American pop, with crucial side trips to the UK and Jamaica, from the biz to the stars to the upstarts and beyond, Can't Slow Down is a vivid journey to the very moment when pop was remaking itself, and the culture at large - one hit at a time.

"Imagine a time when people bought millions of CDs, pop musicians had the larger-than-life allure of movie stars, and nearly every genre, from Top 40 to hip-hop to indie, was thriving. That year was 1984, and Michaelangelo Matos' rollicking and deeply researched Can't Slow Down hurls you back to a time when pop music wasn't just thriving; it welcomed anyone and everyone to revel in its crossover dreams." (David Browne, author of Fire and Rain: The Beatles, Simon & Garfunkel, James Taylor, CSNY and the Lost Story of 1970)

"Through rigorous research and engaging storytelling, Michaelangelo Matos offers a comprehensive look at a breakthrough year in pop music. By giving equal weight to major and lesser-known cultural signposts, Can't Slow Down is an insightful read for even the staunchest music fan." (Marcus J. Moore, author of The Butterfly Effect: How Kendrick Lamar Ignited the Soul of Black America)

"At last-the whole glorious saga of the 1984 pop explosion. Can't Slow Down has the full untold story of how rockers and rappers and dance-floor rebels came together to invent the future, changing how music has sounded ever since. Michaelangelo Matos tells this epic tale in all its detail - it's a definitive scholarly history, but he also turns it into a thriller and a love story, with an infectious joy that practically dances off the page. A pure delight." (Rob Sheffield, author of Dreaming the Beatles)

"Can't Slow Down reads like a 'We Are the World'-style celebrity mega-single in book form. It is a delightfully jam-packed group bio that brings together characters from Morrissey to Cyndi Lauper, Michael Jackson to Sade. All jostle for their star turns in this ingeniously structured account of pop music's watershed year. Wearing a massive amount of research lightly and displaying his gift for both the industry 'big picture' and the (at times hilarious) artist thumbnail sketch, Matos proves himself to be among the most entertaining and erudite chroniclers of contemporary American popular music." (Emily J. Lordi, author of The Meaning of Soul)

What listeners say about Can't Slow Down

Being also "from the 80s," Can't Slow Down was a walk down memory lane for me in many ways. It was interesting looking back and reading about details and context that we, in that time of having limited access to media (teen magazines, Much Music and the like for me in Canada), didn't have at the time. I felt, given the book was about 1984, that more coverage could have been given to the big 80s artists, rather than those late 70s and early 80s bands. However I can also see the rationale in documenting the events and artists who culminated in 1984. The book was organized by chapters on venues, rather than chronologically, so it jumped around more than I would have liked. Overall, though, it was an interesting read.

For anyone who is into or just curious about 1980s music and pop culture, this book is a must-read and listen. There are a lot of juicy details about hitmakers of every genre.

Interesting, but needed a better editor

Overall I enjoyed this look at the mid 80's music scene. The problem is that there is seemingly no band that the author doesn't cover. Everyone from Michael Jackson to Husker Du gets their turn in the spotlight. It all runs together after a time and the narrative suffers as a result. I think it would have been better to use a framing device like Live Aid or the USA for Africa and Band Aid sessions and then jump back and profile the acts that came together, followed by an epilogue. Having said that, it's still an interesting listen. I learned quite a bit about the era. The narrator does a good job keeping the ear engaged - he reminds me a bit of Casey Kasem, which seems appropriate given the (mostly) top 40 subject matter. I recommend purchasing, but don't try to stream through in a few sessions. Spread your listening out over several weeks and I think you'll enjoy it more.