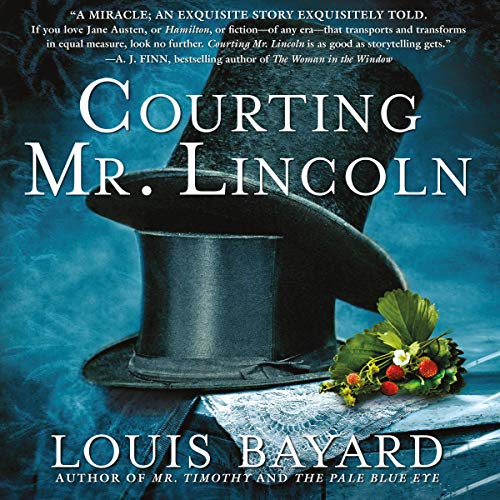 When Mary Todd meets Abraham Lincoln in Springfield in the winter of 1840, he is on no one's shortlist to be president. Rough and reticent, he's a country lawyer lacking money and manners, living above a dry goods shop, but with a gift for oratory. Mary, a quick, self-possessed debutante with a tireless interest in debates and elections, at first finds him an enigma. "I can only hope," she tells his roommate, the handsome, charming Joshua Speed, "that his waters being so very still, they also run deep."

It's not long, though, before she sees the Lincoln that Speed knows: a man who, despite his awkwardness, is amiable and profound, with a gentle wit to match his genius and a respect for her keen political mind. But as her relationship with Lincoln deepens, she must confront his inseparable friendship with Speed, who has taught his roommate how to dance, dress, and navigate the polite society of Springfield.

Told in the alternating voices of Mary Todd and Joshua Speed, and rich with historical detail, Courting Mr. Lincoln creates a sympathetic and complex portrait of Mary unlike any that has come before; a moving portrayal of the deep and very real connection between the two men; and most of all, an evocation of the unformed man who would grow into one of the nation's most beloved presidents.

with Mr. Lincoln. with Mary Todd's fiesty personality. with Joshua Speed's devotion. with the dichotomy of a clear mind and melancholic mind battling simultaneously inside Me. Lincoln. with lively recital imitating accents, tone and personalities by Tavia Gilbert and Robert Fass. with the little moments imagined and created thru out the story. with the clever questions with a twinkle Mr. Lincoln seems to ask so often. above all with the wonderful soul Mr. Lincoln is.

This is not what I would usually listen to but I thoroughly enjoyed it. I found myself rooting for Lincoln and Mary to get together. The different perspectives of Joshua and Mary added to the storyline and character development. And you couldn't have picked better narrators! Well done Louis!

After having read other works on Lincoln (everything from Sandburg’s dry 3-volume biography to Abraham Lincoln: Vampire Hunter, I feel that this novel did a really nice job capturing the personalities of each historical figure. I was especially impressed with the way Lincoln’s low self-esteem and depression were handled.

Such an engaging story, with audible performances that we're mesmerising. This must be made into a play!

A first for me

This is the first time I have ever stopped a book half way through and deleted it. The book was in no way just a story about Mr and Mrs Lincoln. It took such a bad turn I did not enjoy at all.

This is like if “Emma” and “Pride and Prejudice” had a gay American baby. LOVE.

Could not have been better!

Louis Bayard's account of Lincoln's bachelorhood, courtship, and rise to the forefront of a troubled nation rings with the everyday truth of a young man on his way to a future we know, but which he had no idea of at the time. Bayard helps us to see beyond that terrible future to become aquainted with the every day life and character of three young people facing an uncertain future, as all of us do: Lincoln, Mary and the storekeeper with whom Lincoln lived. Bayard gives us history minus the coming tragedies and genuine human characters with whose tensions and dellights we can relate. He brings this era and story to living reality.

Having read many books about Mary and Abraham Lincoln, this book was interesting but added nothing that I did not already know about them. I did not know about Joshua Speed's life after he returned to his Farmington Plantation which is now the renowned Speed Museum.