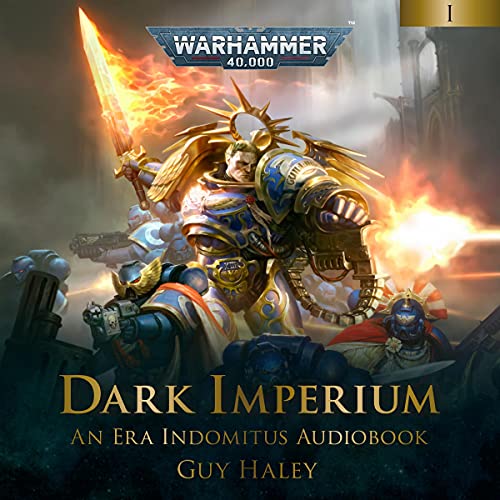 Audiobook 1 of the Dark Imperium trilogy.

The first phase of the Indomitus Crusade is over, and the conquering primarch, Roboute Guilliman, sets his sights on home. The hordes of his traitorous brother, Mortarion, march on Ultramar, and only Guilliman can hope to thwart their schemes with his Primaris Space Marine armies.

Listen to It Because

Experience the beginning of the Plague Wars, as the Imperium's lord regent fights to reclaim his home from the Death Guard and their daemonic allies.

Fell times have come to the galaxy. Cadia has fallen, destroyed by the onslaught of Chaos. A Great Rift in the warp has opened, and from its depths spew daemons and the horrors of Old Night.

But all hope is not lost… A hero, long absent, has returned, and with him comes the wrath of the Ultramarines reborn. Roboute Guilliman has arisen to lead the Imperium out of darkness on a crusade the likes of which has not been seen since the fabled days of the Emperor.

But never before have the forces of Ruin amassed in such numbers, and nowhere is safe from despoliation. From the dreaded Scourge Stars come the hordes of the Plaguefather, Lord Nurgle, and their pustulent eye is fixed on Macragge. As the Indomitus Crusade rages on, Guilliman races to Ultramar and a confrontation with the Death Guard.

What listeners say about Dark Imperium

The Ultramarines are flawless and humble and perfect in every way. Boring, boring, boring.

Great work, money siphon. It's a money siphon. Rouboute Guilliman says some things. Nothing actually changed in this reprint, except maybe three or four paragraphs of absolutely soulless writing were included to reskin this cash grab.

The goal is to separate the client from their money and you have done that.

It was different, but not in a good way. I'd recommend the original one more, if its still available. (I also personally hate retcons)

good but should of been free...

Be patient with this one.

Dark Imperium is an interesting book. However, its appeal is definitely in the realm of character psychology. For a 40k book, it isn't exactly action-packed. There are battle scenes, but I'd say it's main focus is the in the duty Roboute Guilliman has to the Imperium. It talks a lot about how he feels as a fish out of water in the 41st Millennium. You get some great details about the Primarchs and The Emperor.

The thing that I got hung up on is this: 40k can be a bit schizophrenic when it comes to its tone, and nothing is more varying than the way the various writers treat the forces of Chaos. Mortarion features fairly heavily in this book. We got some great lore about The Death Lord in The Buried Dagger and The Lords of Silence. In these books, the fantasy was treated as gritty realism, almost like Game of Thrones or some other gray-morality fantasy tale. But other writers tend to depict the setting almost like an episode of Thundercats. The forces of Nurgle feel very cartoonish in this book, especially with the way the narrator delivers the lines. They feel more like a scene with Skeletor and his henchmen inside Snake Mountain, with their stilted dialog and absurd behavior. This is a real letdown after how well Mortarion was depicted in The Buried Dagger. This writer sees him more as a comic book character, more like the older 40k than the way the characters have matured the past few years. I wish Abnet had continued this depiction of Mortarion and not the cartoon version.

And it doesn't matter that I've read two dozen 40k books at this point. The religious zealotry these fools show the Emperor continues to be nauseating. It's not poignant, it's not profound, it's just flat out obnoxious. All this bowing and scraping and praying is ludicrous. It's a chore getting through this crap in these books! I know that's a bit of the point, but it doesn't make it any easier to listen to.

$23 for 1 extra page of dialogue in the very beginning explaining the change to the time it occurs. Save your money if you have the 1st iteration.

Just as good as the first time!

Love the set up and execution of the battles and story.. Especially nurgle’s entrance onto the garden planet!!

My second time listening, this was my first 40K book and I’m now re-reading this to prepare for godblight!

This trilogy really has everything you’d want as a reader, this is a must read!

I don't feel like typing out paragraphs, but if you want a look into Guilliman's mind while he comes to terms with what the IOM has become, this is a solid novel.

I'm a bit biased, as I have pretty much exclusively read Guy Haley 40k novels, but my goodness is he a great author. I listened to the Dante Trilogy before starting this Trilogy, and while different, this series seems to be equivalent in quality and lore.

There's a lot of setting up in this novel, but it leaves you wanting more, it doesn't feel like a cheap cliffhanger. I'm exited to continue the trilogy.

Uninspired, all tell and no show, annoying.

By chapter 19 I realized it wasn't going to get better. I gave it a chance.

guilliman is a weak leader in this depiction. as told by the book, guilliman is a genius; there was no evidence of genius--all "tell and no show."

I absolutely loathe this book. I was thinking about getting back into 40k, now I've changed my mind; I'm done. This book is seriously so bad.

thought it was a new book only to find out it's basically a reprint of another book in my library. waste of a credit.

I already have the original version of this book and was hoping BL might show some loyalty to their fan base by giving the updated version on a 1 for 1 basis as they did when they changed narrator with Avenging Son, sadly they didn’t and me being a completist I have bought the updated books and to be honest there is very little change except the retcon of the time frame and unnumbered sons, JB does is usual superb narration which almost makes it worth buying twice

Wasn’t sure what to expect here but was keen to see where the current plot was heading for 40K and being a avid fan of the death guard this book kept giving. Great plot and insight into to the primarch having been resurrected into a very different imperium. Great book a must listen for 40K true fans

Boring bolter-porn elevated by John Banks' enthusiastic narration. The few interesting chapters are drowned out by the repetitive descriptions of combat and monotonous conversations that go on for far too long. Avoid and just read the wiki page for the Lore developments.

A great beginning to a trilogy
Were it a standandalone work it would not be a must read. But as a beginning to a well thought out series it is worth its price.

This audiobook is basically a redo of the first edition with about 6 minor changes to wording here and there. If this was all that was done I would pass this off as a reissuing like Avenging Son except you had to pay for this one, however this is not the only change. A glaring and blasphemous change was wrought on this audiobook.

The bellicosity of the reading was stripped. There simply is less enthusiasm in the reading as their was in first edition's audiobook, There is no trilling of the voice or enthesis on words. It's all read flat and monotone. You can feel that John doesn't like having to read the same book again. Thankfully I still have first edition in my library the retconning is so minor that it can still be enjoyed, Bellicosity and all.

Barely made it through a fraction of the book

The narration was so dull and repetitive I gave up halfway between the Guilliman Fulgrim fight.

Good story if a bit straightforward

really enjoyed it, really interesting conversations and like where it is taking the universe

The storey is great always live when the imperium kicks butt against chaos, as too long we have been on the back foot, aswell as John bank's narration this listen is well worth the money 💰 this is my 3rd listen to this series and it still is amazing to my ears. John Banks should definitely narrate more wh40k novels!!!!

Guy haley never dissapoints. A good look into the character of Guilliman and the state of the modern imperium. The first of hopefully 3 great books.

Couldn't be bothered to finish. Incredibly dull, no real plot. This really was not worth the time.

Great for getting to sleep fast.

As far as lore and universal understanding goes this book is about as useful as a wet fart in public. In regards to the quality of writing, well… I’ve certainly read far better, but I’m struggling to think or worse…
Performance was less than ideal, so many of these characters sounded the same that I got lost. I sadly cannot suggest this book to anyone, and that’s coming from a person with special place in Their heart for girlymans boyz. Skip this book, or get it if you need help falling asleep.

I liked this very much and am looking forward to the next book in the series.

much needed jump back into the scale of Heresy war

after finishing the heresy and waiting for the siege of terra books, I missed the galactic legion vs chaos scale of war. this title delivered that in a jump in package

I found this book very good.
Gives good background into the past of the Imperium.
Great performance.
Worth the listen and looking forward to book 2 in the series.

Some of this gets a bit nerdy and goes into 40k lore. I'm a big fan of the 40k-verse and I thought I'd give this a go as I wasn't able to listen or read the original edition of the book. I was also keen because there is precious little in the way of stories regarding the Death Guard.

Anyway the story is average and the pacing seemed a little off and the plot seemed to jump around a bit. The action sequences were ok, but were also mostly an obvious advert for the previous editions miniature box starter set for the associated game.

some of the better sequences don't include the main characters, and it's a shame some other characters aren't utilised or fleshed out in further detail. The Guardsman and his fall is one such example, but also the key character of Calgar who seems to just be dismissed despite being a mainstay of the ultramarines 40k lore for the last 20 to 30 years before the end of 7th edition and the start of 8th edition.

This is definitely one of the weakest 40k novels Ive read in a while.