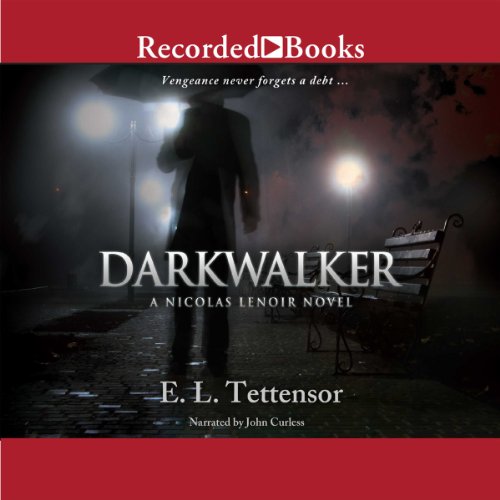 He used to be the best detective on the job. Until he became the hunted...

Once a legendary police inspector, Nicolas Lenoir is now a disillusioned and broken man who spends his days going through the motions and his evenings drinking away the nightmares of his past. Ten years ago, Lenoir barely escaped the grasp of the Darkwalker, a vengeful spirit who demands a terrible toll on those who have offended the dead. But the Darkwalker does not give up on his prey so easily, and Lenoir has always known his debt would come due one day. When Lenoir is assigned to a disturbing new case, he treats the job with his usual apathy- until his best informant, a street savvy orphan, is kidnapped. Desperate to find his young friend before the worst befalls him, Lenoir will do anything catch the monster responsible for the crimes, even if it means walking willingly into the arms of his own doom.

Well that was a surprise...

Its not like I went into this expecting Darkwalker to be bad, exactly. I would never waste my time digging through a garbage bin hoping to find a suitcase of money hidden among the trash. My policy is pretty much the same for books. I'm not denying the possibility that the metaphorical suitcase could be there, but I never found the rewards of employing such a tactic worthwhile. I never would have picked Darkwalker up if I hadn't hoped to find at least something worthwhile. No, I went into this expecting the same thing I expect out of most books, mediocrity. Especially since I've never heard of the author before, even in passing.

So color me surprised to find that this book wasn't mediocre, or even above average, but really very good. It has it's flaws of course, but I've never read (or in this case listened to) a book without flaws. Let's get those out of the was first, since there are relatively few.

The first and the simplest to point out is that I knew, beyond a shadow of a doubt that Lenoir was never going to die during this book. I was never afraid for is life. And before anyone jumps down my throat about spoilers I would direct you to the cover where it says Darkwalker: Book 1 of the Nicolas Lenoir NOVELS which is how I knew with such certainty. I'm not sure who's oversight this was, but it made me want to smack someone on the back of the head. It broke through the suspension of disbelief for me, but maybe that's just a personal thing.

Second was that while I was never bored with this novel, I was never shocked either. I would never go so far as to say it was predictable, but it felt a little....safe? There's a twist around the 3/4 mark in the novel that I didn't see coming until just before Lenoir did (and I mean JUST before, I realized what was going to happen and then Lenoir pieced it together a few seconds later) which was good, that's how a good twist/ reveal works, however my reaction was a bit more... subdued than it should of been. It went somewhere along the lines of "Huh. Well played." instead of, "NO. NO!!! Oh my god. Oh My GOD HOW DID I NOT SEE THAT!?!?!" Let's be clear, it by no means fell flat, and maybe other people will react to it more strongly than I did, but it didn't shock me to my very core.

Which brings me to the third weakness in this book, which I feel was hinted at in an earlier part of this review, the story has a problem with making me worry for the characters. that isn't to say I don't like the characters, quite the opposite, but I was only scared for one of the characters once and that was Zachery at he very end of the book. I was getting pretty tired toward the end though, maybe that has something to do with it.

It's also kind of sort, I finished it in one day. You can take that as a mixed bag, because on the one hand, it means I couldn't put it down and it makes me want more, but on the other hand that's a 19 dollar book that I finished in one day (dammit).

All that being said, everything else that I didn't mention gets a hearty thumbs up. I liked all of the characters, they were both entertaining and interesting, and I enjoyed being in the heads of all of them. Zachery was in the precarious position of potentially being an annoying bratty street urchin, but he ended up being my favorite character after Lenoir. Yay for good characterization of a child, its such a rare thing to see.

The voice acting is superb, with Curless able to portray the people of varying ages and accents believably and his voice seemed to fit the story as no one else's could. I can't imagine Lenoir's voice as anyone else's now, which is always a good sign.

Tettensor is a master of description. I love the way she sets her scenes, and the way she fleshes out her characters through interactions with others, observations from onlookers, and through their own thoughts. After I finished the books I looked up Tettensor, wanting to read some of her other works, but I couldn't find anything else. I don't know if this is the first novel she has ever written, but it definitely a strong debut, it has moved me from being just interested to really excited to seeing where she's going to go from here. If I made this review sound like I'm being down on the novel, I want to make it clear here that nothing could be further from the truth, I give this a strong recommendation to anyone who anyone who comes across this book, whether you stumbled across it like me, or if it was referred to you by someone else. Darkwalker is something that should definitely be experienced.
(Phew, that was longer than I was expecting)

Where does Darkwalker rank among all the audiobooks you’ve listened to so far?

It's solid. It kept my interest. I am invested enough to want to find out what happens next to Lenoir and his partner Khody.

What other book might you compare Darkwalker to and why?

The author seems to be going for a Sherlock Holmes type of brilliance and intuition that is rusty from a lack of use. This brilliance is not in evidence in the main character Lenoir who seems to be living off of his good reputation which leaves it to his less experienced partner to put the pieces together.

Have you listened to any of John Curless’s other performances before? How does this one compare?

Yes, it definitely kept my interest.