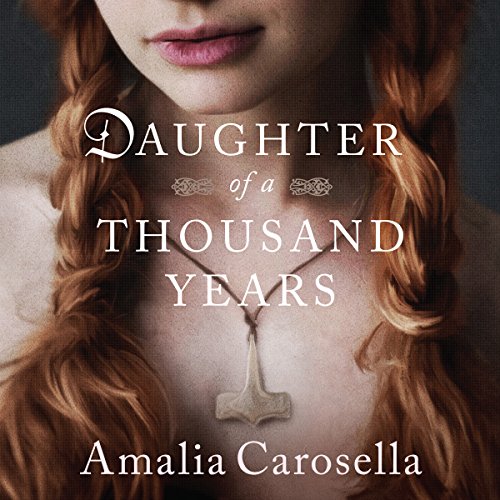 Daughter of a Thousand Years

More than her fiery hair marks Freydís as the daughter of Erik the Red; her hot temper and fierce pride are as formidable as her Viking father's. And so, too, is her devotion to the great god Thor, which puts her at odds with those in power - including her own brother, the zealous Leif Eriksson. Determined to forge her own path, she defies her family's fury and clings to her dream of sailing away to live on her own terms, with or without the support of her husband.

Like her Icelandic ancestors, history professor Emma Moretti is a passionate defender of Norse mythology. But in a small town steeped in traditional values, her cultural beliefs could jeopardize both her academic career and her congressman father's reelection. Torn between public expectation and personal identity, family, and faith, she must choose which to honor and which to abandon.

In a dramatic, sweeping dual narrative that spans a millennium, two women struggle against communities determined to silence them, but neither Freydís nor Emma intends to give up without a fight.

Should be marketed as religious

Hard to finish. Narrator often seemed to speak with a lisp. My biggest problem was the content - I read books about religion, but I CHOOSE religion - I don't want it spoon fed to me (thinly) disguised as another genre.

I enjoyed the historical aspet/half of the story, the modern day have was only alright.

A beautifully written time parallel of two amazing heroines. The narrator gave each a different but equally strong memorable presence.