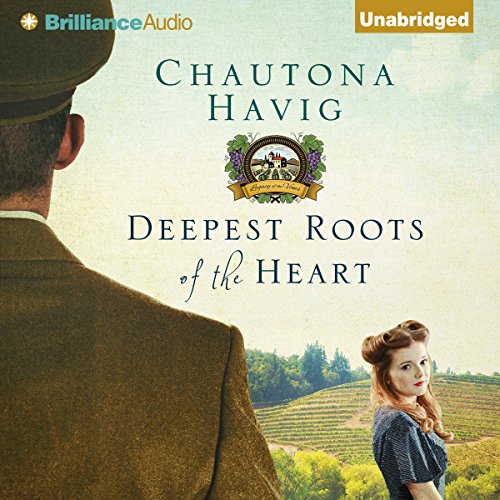 During WWII, Avelino Carrillo spent four harrowing years in the South Pacific with one thought driving his survival: to return to his beloved home in Napa Valley.

The Carrillos have a history in the valley that stretches deep, like grapevine roots in the soil. For a century, they worked the vineyard at their family home, la Casa de los Sueños, until they lost the property to a wealthy land baron. Now, Avelino is determined to reclaim the land and home he loves so much. When he meets Amelia, a young woman who lives at the vineyard with her grandfather, he finds that regaining his birthright isn't his only struggle - he battles the longing of his heart as well.

Can Avelino overcome the local bigotry and personal demons that face him to create the life he desires?

What listeners say about Deepest Roots of the Heart

Set in the beautiful Napa Valley, after WWII, Avelino Carrillo has returned to reclaim the vineyards and home that his family has tended and owned for over a hundred years . . . until his brother lost it to a wealthy land baron . . . when he returns to la Casa de los Sueños, he finds a young woman with red hair, Amelia, living there, with her grandfather, Joe . . . as tenents . . . and the vines have much tending to be done . . . Avelino makes an agreement with the landowner to redeem his land by working for him for seven years for no pay . . . and moves into the barn . . . proud of his Mexican heritage, the hard work of his ancestors who bought and tended the vineyards, Avelino vows to restore them so they will again produce the best wine . . . every evening after supper, Avelino tells how the first Avelino fought in the Mexican American war, then made his way west from Texas to California, and how the vineyards came to be . . . Moving back and forth between the two time periods, listeners hear the rich heritage of the Carrillo family . . . who have a deep faith in God . . . Avelino is Catholic . . . and low and behold, Amelia and her father, Joe are Baptist . . . I found the discussion of the differences in their beliefs refreshing . . . as we've had a similar discussion in our own family . . . we are Baptist, my mother-in-law was a devout Catholic . . . she is in heaven, celebrating with Jesus now . . . This was an excellent book, full of character, no fluff . . . I SO hope that the next book in the series comes to audio SOON!

I started out loving this book because it’s different. Not the same old same old. But as time went on too much time was wasted on details that weren’t that important. There was no time spent on running the actual winery. No discussion of its successfulness or not.

Also, it was a bit difficult to follow the stories of the two Avalinos. Did they have to have the same name? No explanation of who the 2nd Avalino was named after or why. He did say that he was not related to the first Avalino. So how & why did he get his name?

And then suddenly it ended. Boom. Just like that it ended & Avalino was old & Amelia was dead already. Nothing about their lives together. It’s like all of the really interesting details of their lives were just left out. Horrible abrupt ending.

What could have been a great story just flopped.

The narrator did a good job though.

Reminder to all “Roots of the Heart”

Deeply developed storyline and characters that grabbed me from the start. Questions of honor, integrity and the depths of true love are ingrained throughout the story. The recorded acting was superb and added to the book. I thoroughly enjoyed the book and performance!

A great story of character, commitment and love!

Such an uplifting story of a principled young soldier returning home to face an indebtedness, not of his making, but one he was determined to fulfill for the sake of his family's honor and his commitment to God. Well developed characters you come to know and love with a storyline that is not always so predictable. Narrator did a very fine job as well