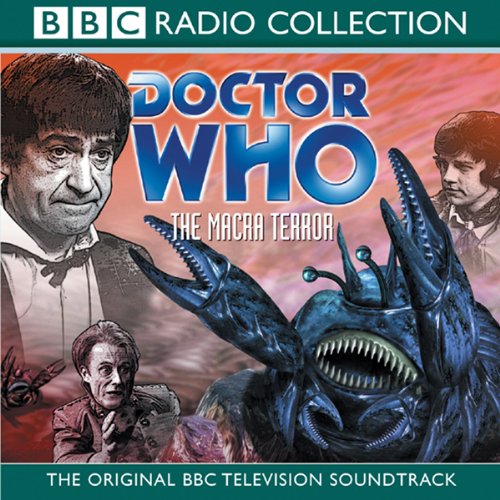 When the Doctor, Polly, and Ben visit a human colony that appears to be one big holiday camp they think they have come across a truly happy place. But a shadowy presence soon makes them realise that the surface contentment is carefully controlled. The colony's inhabitants have been brainwashed by giant crab-like creatures - the Macra. Insidious propaganda, broadcast by the Controller, forces the humans to mine a gas that is essential for the Macra to survive - but fatal to them. The colony must be saved - but how?

The Doctor and his team are up against it, particularly when Ben falls under the influence of the Macra. Can he be rescued from their evil clutches? Can the gas-pumping equipment be destroyed, getting rid of the Macra for good? An exciting "lost" television adventure, now with digitally remastered soundtrack, starring Second Doctor Patrick Troughton with linking narration by Colin Baker.

What listeners say about Doctor Who: The Macra Terror

Not Coilin Baker but the wonderful Anneke Wills

Would you listen to Doctor Who: The Macra Terror again? Why?

Yes, These audiobooks cover the "lost" TV episodes, with wonderfiul narration. This book advertised Colin Baker as narrator. That's incorrect: another version of the Macra Terror. Linking Narration on this one is by Anneke Wills, who played Polly, nad the narators script is more complete.

The Doctor, Patrick Troughton, whose voice has a wonderful deep undertone and carries much of the subtley of the drama.

The start of episode 2 where the clifhanger is brought off the boil by the Macra scuttling off.

I was very pleased to have Anneke Wills narrating. It's a shame that the notes on the audiobook have this wrong.

Not being especially fond of insects, I was perfectly happy to listen to this one rather than watching it. (Good thing, since the video has been lost.) The more I see and hear Patrick Troughton, the more impressed I am by the subtle depth he brings to the role of the second Doctor.

Not one of best Doctor Who stories. Silly monsters and very stupid characters. Maybe it's just as well this is a lost story. The Macra don't return until David Tennent time as the Doctor. I hope the next story is good.

The product detail is wrong. This is the verstion with a companion providing a naration not Colin Baker. The audio quality is much better than the Colin Baker verstion.

It's a shame that we'll never see it on TV or on DVD at all.