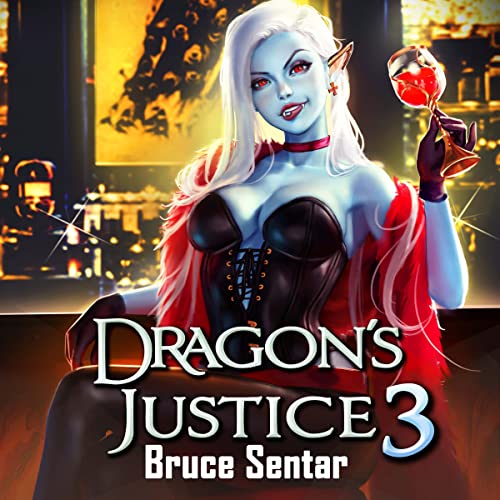 Zach is on the hunt for Morgana, who’s hidden herself in Sentarshaden, the secret city of paranormals.

The elven city is celebrating the time of rebirth and nurturing their root trees.

His secret is slipping, and he sees just what is in store for him as a green dragon becomes known to the city. The new dragon is both revered and hunted. But keeping himself hidden becomes impossible as he finds Morgana in a terrible state and needing his help.

The only thing that can help her happens to be in the hands of the church itself, and a certain gold dragon isn’t going to take no for an answer as he collides head on with the knights templar to save Morgana.

What listeners say about Dragon's Justice 3

This book kept growing from the last two books. It kept everything in a fairly smooth transition. It has some predictable parts but are still fun to listen to. great book

This is my favorite in the series so far. I enjoy the greater world building in this one. The harem stuff provides some truly laugh out loud moments throughout as well. Looking forward to the rest of the series

I really like the books and they keep getting better. But why does he have to act so weak. It's so annoying and makes me angry how insecure he is even though he is the best thing since sliced bread. Stronger than anything on the planet surrounded by beautiful women that have beg him to have sex. There is no way this was written by a man. All he does is bitch a moan about everything. He hated the Wolf Alpha in the first book for everything he starts to do himself in the next two books. I payed for all the books at once so I will listen to them because getting a refund in a pain. I really hope he starts to man up even a little bit by book 4. I did like that even his wolf girlfriend told him to suck it up and start acting like the alpha he is.

Best one in the series so far!

You can see the growth in both writing skill and plot development as the series goes on, I can’t wait for the 4th installment!

So far this series has been a hit with me. I love the story arc and the characters.

To be fair, it's solid for a smutty action book. I struggle with the amount of inconsistenty in character strength. Also, MC is still just developing with no actual driving force. The plot moves along well, but an actual character building event doesn't happen.

I love this story!

All 3 books have been well balanced from the sex parts to the action and the story.
I can’t wait for the book to come I’m eager for the continuation of the story.

funnier than the previous books

I think this one the better one so far.
Battle won, but not the war, can't wait for the next book to continue the story. The story in this one got GOOD!!

i enjoyed it with 1 nit-pick

I realy enjoyed this one, especially the depiction of angels as racist assholes. I call them racist because they believe that since they are angels whatever they want to do is good, since they want it. My only complaint is the pronunciation of Yev's name. the narrator pronounces it as Eve, when I thought it should have ben pronounced similar to bed, or the first syllable in Yevdokiya. I probably wouldn't have even noticed it if I hadn't read the book before the audiobook came out. But in the grand scheme of things it was just a very minor twinge.

each entry in this series is better and better, expanding the world and its characters. the pacing is well managed, nothing feeling like a contrived plot tick - it all flows together.

the narrators bring each character to life, making them easy to differentiate.

the story, of how the newly minted Pendragon, rushes off in pursuit of his errant mentor expands easily into a celestial conspiracy. the only quibble i did have with the plot (and not major enough to reduce a star) was how quickly one of the celestials turned on her allies. a bit more build up would have helped, considering how zealous she was prior.

i eagerly await the 4th installment!

this series is very sex heavy in parts. I find it enjoyable as well as the rest of the story. It makes me feel like this is an adult story without being totally focused on the sex scenes. this is an awesome series and I really am looking forward to the next book. the narrators have done an excellent job with all aspects.

Enjoyable and my favourite so far.

Continuing an enjoyable storyline, with good depth and humour. Great job Bruce :), hoping for 10 books in this series.

need the next one asap.

Need more. I want to know what's going to happen next. I need more dragons.

Absolutely brilliant, from start to finish. Have already read it twice but have been looking forward to the audiobook for months and the narration did not disappoint!

This is most definitely an amazing addition to an already fantastic story, absolutely cannot wait for the next instalment, the narration is fantastic and both narrators to an amazing job.