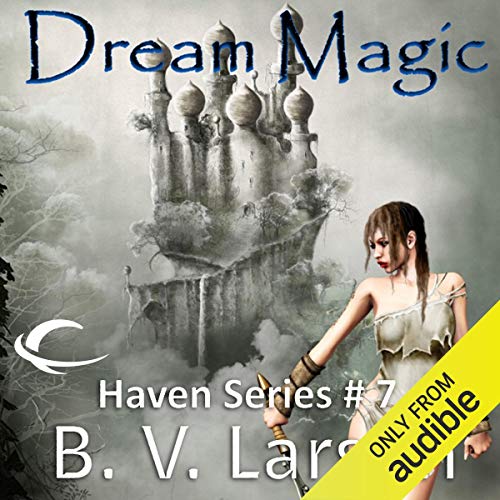 Dream Magic is the finale everyone has been waiting for….

Long awaited, Dream Magic has finally been released and ends the Haven Series. Twice the length of any other story this book includes three appendices that explain and discuss the underlying world. Brand is no longer young, but he still wields a mean Axe. Myrrdin and Oberon resolve their differences as father and son at last. A new power, the most terrifying ever seen, arises and threatens all the rest. In the final war of the Jewels, every power of the Nine plays a key role. Brand’s usual allies turn against him, while former enemies become friends. Who is on which side? Who can Brand trust, and who is secretly aligned against him? He must make his choice and wield his flashing axe justly….

The Haven and the fate of two worlds hangs in the balance.

Give us more Mr. Larson!!

Where does Dream Magic rank among all the audiobooks you’ve listened to so far?

I have listened to this entire series almost non stop, it is that good. The characters are well build, their purposes are clear and you are left craving more.

The Interplay between the characters and it provided a simple end to the series. It does seem a little manufactured but if you have listened to the series you understand why it has to end here.

Have you listened to any of Mark Boyett’s other performances before? How does this one compare?

Mark Boyett and B.V. Larson are made for each other. The store is beautiful and Mark Boyett breathes life into the book, it is like watching a beloved show but with your ear instead of you eyes.

I was craving more!!

Mr Larson, i have read a number of you books. Please write more of your Undying Mercenaries series, bring some of your other fantasy series to Audible. The Haven series was great and now you have left me wanting more.

These books should have been 40 hours long!

What made the experience of listening to Dream Magic the most enjoyable?

It went far away from the normal fantasy books that are soo boring most of the time.
I love the Folklore angel to things since they breed more mystery into the story than the normal "we live for 1000 years but never get anything done" type elfs and so on.

What other book might you compare Dream Magic to and why?

To be perfectly honest i dont know any other books to compare this to and im trying to find them. Closest iv read so far would have to be Monster Hunter internationall but the comparesen is minimal.

Mark Boyett are is by far one of the best narrators out there and i hardly ever even listen to the sample before i buy if i know its him doing it.

The ending without a doubt. Some people might not like it but i thought it was great.
Had me in tears at one point (even when knowing what was going to happen).

If you read this BV Larson please make more of these Folklore fantasy books.
Even start up another Haven book series since this is by far the best fantasy iv ever read (i thought the lord of the rings series was boring.. couldnt even get thruogh the hobbit).

A final conclusion to a series I've fallen in love with. A magical world of good and evil with everything in between. A fantastic must read!