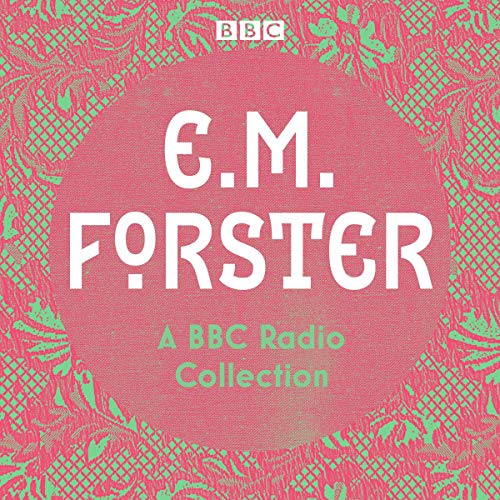 Dramatisations and readings of EM Forster’s finest works, plus Stephen Wakelam’s radio play A Dose of Fame and the documentary feature Forster in India: Sex, Books and Empire.

One of the greatest English novelists of the 20th century, EM Forster was also an accomplished short story writer. This collection includes stunning adaptations of his classic novels A Passage to India, Where Angels Fear to Tread, A Room with a View and Howards End. Among the star casts are Penelope Wilton, Ellie Kendrick, Sian Thomas, Emilia Fox, Sheila Hancock and John Hurt.

Also featured are four of his short tales - ‘The Story of the Siren’ (read by Dan Stevens), ‘The Road from Colonus’ (read by Andrew Sachs), ‘The Obelisk’ (read by Ruth Wilson) and ‘Ansell’ (read by Peter Kenny).

Forster’s posthumous novel, Maurice, is dramatised with a full cast and stars Alex Wyndham and Bertie Carvel, while Stephen Wakelam’s drama A Dose of Fame, starring Stephen Campbell Moore as Forster, sees the author grappling with a mysterious death, his own sexuality and an idea for his next novel.

I enjoyed this collection very much. My favorites were " A Passage to India" and " A Room With A View". The dramatization was very well done and the stories were very well written and entertaining.

Foster's other work, Howards End, remains a great favourite, the only weak spot being a rather unlikely and unnecessary death-by-bookshelf. Anyone who has been hit by a bookshelf knows death is an unlikely outcome, however neatly symbolic it may be. Here, there are many interesting ideas to explore until Foster decides to go full Hollywood blockbuster on us. To not ruin it for readers I will not name names. There is an unlikely sequence of events inserted to add unnecessary extreme emotional drama, something Hollywood is regularly guilty of. Again it was unnecessary for the exploration of the ideas and relationships in this book, and just turns it all into an operatic farce. While some people may like operatic farces, empathy is destroyed, and the story becomes a metaphor rather than a real exploration of real people.

This is a GEM collection of drama’s & readings. I enjoyed all & will listen to them many times. Well acted & produced this is the perfect collection full of individual plays and readings that appeal to all.

This is one of the first audio books I listened to.. some months ago. It did not disappoint.. and reminded me of how good the radio was a dozen or so years ago..
Loved the music in the background.. and Foster such an observant writer.. it will not disappoint.. but I am the generation who saw E M Foster walking slowly into Trinity.

Forster’s best known bills presented in BBC dramatisations plus some of his shorter works narrated from BBC archives. Whether you’ve read the books, seen the distractingly sumptuous cinema adaptations, or both, or neither, it’s good value.