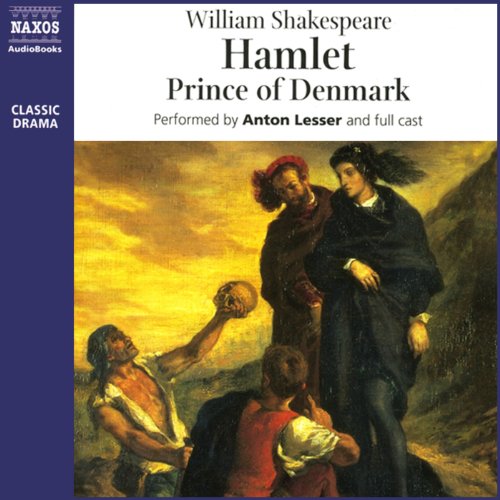 Hamlet, which dates from 1600-1601, is the first in Shakespeare's great series of four tragedies. In writing this extraordinary play, Shakespeare effectively re-invented tragedy after an interval of roughly 2,000 years - you would have to go back to the Greek dramatists of fifth century Athens to find anything of comparable depth and maturity.

This production features the voice of Anton Lesser as Hamlet along with a full cast.

What listeners say about Hamlet

This is a first-rate production of the play. It's clean, complete, and well-acted. Music and sound-effects are tasteful. At times, it might be a little bit too quiet, say, for airplanes, but these moments are few and far between. Overal, I wanted an audible copy I could keep coming back to like the text, and that's precisely what they've delivered.

The best of the audible Hamlets

My chief criterion in evaluating a dramatized performance of Shakespeare is that none of the lines are left out, save a few words here and there. Secondly, I also appreciate accurate sound effects, and a subtle "soundtrack," and a good overall recording quality. By all of these measurements this Naxos production of Hamlet scores well. The main problem is that, in a couple of scenes, Hamlet himself starts speaking way too fast for one to take in the lines. One might argue that this play is soooo long that, since this company has - quite justifiably - decided to remain loyal to Shakespeare's script, it only makes sense that they would have to hurry it up a bit. A few reviewers have failed to take the validity of this argument into account. The BBC Shakespeare productions are invariably bad about leaving out large chunks of important dialog. Any geek like you or me who listens to audible dramatizations of Shakespeare will insist on every verse being spoken.

A poor introduction to the play

This is not directed at those who are already familiar with Hamlet and have read the play before. This audiobook was my first experience with Hamlet, however, and the action is very difficult to follow. I'm not familiar with Elizabethan English, and the actors generally speak very quickly with some exceptions, such as Claudius. (Hamlet himself, however, is not an exception.) I listen to books in my car, but even taking the background noise into account, the changes in volume were extreme. At several points I had to turn the volume up so high -- even to hear that anyone was speaking at all! -- that I worried that when some new character entered and the volume returned to normal, my ears would be hurt.

While those who have read the play may get a better appreciation for the work by hearing it dramatized, (and the use of sound and music is well-done, to be fair) I would not recommend that someone unfamiliar with the play use this production as a first exposure to Hamlet.

I have to admit that this audio book was probably the best that i have every heard. The narration and speaking made me feel as if i was in the time and watching them do all these actions live.

Much better than just reading the play

If you're not able to actually watch the play on stage or film, then this is perhaps the next best thing. Pretty well acted out with music and sound effects. Only real complaint is it isn't broken up into scenes and acts for easy skipping around (or if it is, I haven't figured out how to do it).

Terrible recording!! The sounds are inconsistent; the music so loud that you can hardly hear the words.

There are so many bad versions of Hamlet out there and it is wonderful to find such a good one.

So... This was my first introduction to the play. I loved every minute of it. I totally understand why this play is a classic. I was impressed by the way Shakespeare manages to squeese a few life lessins in short lines. The audio version did justice to all that and more. The acters were wonderful. Many cudoes were given to "our" wonderful Hamlet, which I join. Yet Emma Fielding was wonderful as Ophelia was impressive. This role is so demanding. Just for a wonderful and tallented actress like her. I enjoyed every minute. Couldn't put it down. If you wish to read this play, sit with this version and enjoy almost four hours of bliss.

The cast really knew what they were doing. All very expressive and controlled. Intelligent use of music. Somewhat hard to hear while listening in transit.

Unable to copy to i-pod mini

What would have made Hamlet better?

It was indicated that I could not download this to my I-pod mini because it was not compatible!

Why was I unable to download to my I-Pod Mini as I have several other titles?

I can thoroughly recommend this performance

I can thoroughly recommend this performance . Anton Lesser is superb as Hamlet and the rest of the cast bring it all to life

What other book might you compare Hamlet to, and why?

you can compare hamlet to most tragedy books

What does Anton Lesser and full cast bring to the story that you wouldn’t experience if you had only read the book?

you wouldn't the tones of different character

no as it is a heavy book because of the nature

Hamlet is a play that I always enjoy, all of the play is challenging as Shakespeare reveals the human condition so eloquently, he often leaves you pondering on a seen and then missing part of the next seen. well that is what I have found anyway.