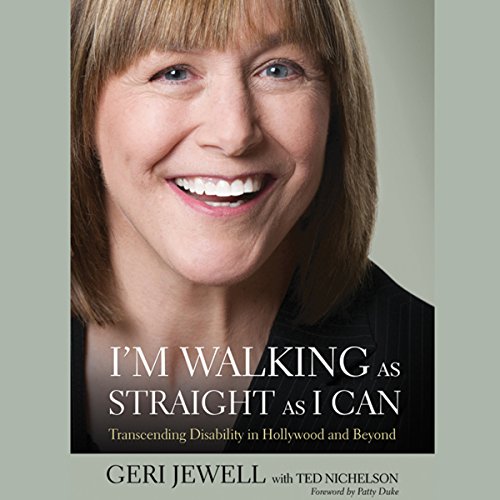 Born with cerebral palsy, Geri Jewell inspired a generation of young people when she became the first person with a disability to appear in a recurring role on prime-time television, with her groundbreaking character, Cousin Geri, on the NBC sitcom The Facts of Life. The book's title - I’m Walking as Straight as I Can - has a double meaning, referring to both Jewell's sexuality and her extraordinary struggle growing up with cerebral palsy.

This candid memoir details her experiences from her traumatic birth in Buffalo, New York, to her rise to stardom as a stand-up comic to becoming a television star. She documents the harsh realities of show business by recounting the relentless discrimination and abuse she suffered at the hands of people she trusted. Her experiences in the shark-infested waters of Hollywood led her on a journey from the Comedy Store to the White House, followed by a downward spiral, tax problems, drug addiction, marriage, and an accident that nearly claimed her life.

When Deadwood creator David Milch recognized Jewell at a pharmacy, he offered her a role in his new HBO series on the spot, and she began to find hope and happiness once again. I'm Walking as Straight as I Can is an inspiring story, told with grace and self-deprecating humor, one that gives readers a rare glimpse of true courage and perseverance.

What listeners say about I'm Walking as Straight as I Can

I listened to this, as a caregiver, with my client with severe CP. She was so proud to have finished her first ever novel, especially since there was so much she could relate to and Geri is our age! Geri is an excellent writer and narrator. The book was fast-paced and consistently interesting! I highly recommend this book!

Could not listen to her voice! Raspy and unpleasant.

Would like to know the story of Patty Duke but could not finish the book it was so poorly done.