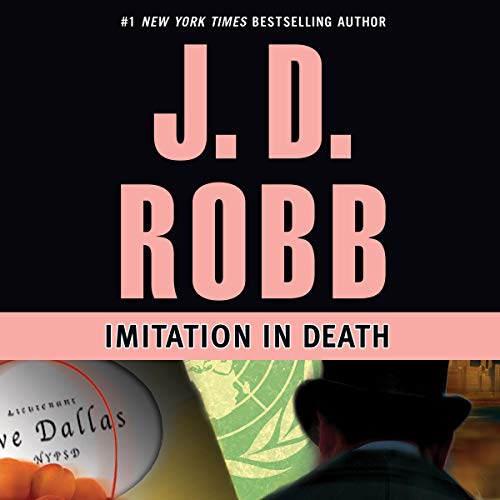 Summer, 2059. A man wearing a cape and a top hat approaches a prostitute on a dark, New York City street. Minutes later, the woman is dead. Left at the scene is a letter addressed to Lieutenant Eve Dallas, inviting her to play his game and unveil his identity. He signs it, "Jack."

Now Dallas is in pursuit of a murderer who knows as much about the history of serial killers as she does. He has studied the most notorious and the most vicious slayings in modern times. But he also wants to make his own mark. And he has chosen his victim: Eve Dallas. And all Eve knows is that he plans to mimic the most infamous murderers of all - starting with Jack the Ripper.

What listeners say about Imitation in Death

Eve Dallas continues her career as a top notch cop who, this time, is after a serial killer imitating the most famous serial killers of all time. As always, JD Robb weaves an interesting mystery while continuing to develop the returning characters. We learn a bit more about Eve's past. Peabody takes the next step in her career - and personal life. And last, but not least, Susan Erickson seems back on her game by reverting back to the original voices that made the characters so beloved in the audio series.

Great even the 2nd time around

I am slowly buying the series with audible.

There is soo many volumes in the series and I tend to forget the details, so it is a lot of fun to reread and enjoy them all over again.

I forgot how much Peabody was nervous about taking her detective test, the many and interesting red herrings(all of them looking suspicious)and the side story of Roake and Eve's mother. Also, i love the home cookout scene where Eve meets Mira's daughter for the first time and has a heart to heart. It was really touching.
On to the nextone

5 Stars! J.D. Robb does it again. Seventeen books in and this series is still going strong!! It never gets old for me and it just keeps getting better. Roarke and Eve are so comfortable in their relationship, it makes me smile. I love the way they tease each other, Eve comes off as so aloof and annoyed, all the while loving it when Roarke irks her into submission. The passion and desire they have for each other gives me the warm fuzzies. On this particular case Eve brings Roarke on board as a consultant and whenever that happens it just adds a little extra to the read. The more Roarke...the better. Along for the ride are the crazy love birds, Peabody and McNab, Eve's rock...Feeney, and the lovely Dr. Mira. All that and another amazing plot, with a psychotic killer, tense moments, as Eve whittles away at the clues to find justice for the victims!!


Susan Erickson is phenomenal as the book's narrator. She nails the voice for each character, and injects the right emotion and inflection, making an already thrilling read...EVEN BETTER!!

OK, I loved the book. The title of my review has more to do with a comment an the murderer's performance at some stages than on the book itself. The last book advanced Roarke's history and this book advances Eve's. Possibly because murder and death are just part of life, but I somehow sense that the ongoing revelations and development of the character's lives are a parallel of aspects of the main plot. I find that this is subtly and interestingly done. I listen to the stories several times and notice little gems and aspects that I was not aware of before. I find that feminism is not overdone in the books and Robb (Roberts) provides a fairly balanced view of the sexes. Although I am a man, I am happy that Dallas offers a fairly good, albeit imperfect, role model for woman as competent and tough, but not beyond using her feminine wiles. I have noticed that the psychological hypotheses of the characters show a more pop psychology touch, whereas Myra's analyses are more professional, a disparate perspective of expertise that offers an interesting touch that gives the characters greater depth. I have tried to read the series from beginning to end, with some tangential journeys. I enjoy the series very much.

I found some of this very hard to listen to. The rape descriptions were just a little too graphic for me. I found myself getting upset and had to stop listening for a while. I don’t care for books like this.

Eve Dallas has to be my all time favorite series.
Do yourself a favor start at book 1 and read them all. Each are different and captures you in the first chapter, characters develope as the books progress
well worth your credits.

Love her “In Death” books. She keeps you hooked.

Love Eve and Roarke. Love how Roarke helps Eve solve murders. Can't wait to see what they do in the next one.

One of my favorites, going through the series again start to finish! Bring on the next book!

found something roarke can't do.

we've finally found something that Roarke can't do! it includes fire & had me laughing! that's one of my favorite things about these books, the unexpected laughter here & there!

She can sometimes be so nasty you actually feel bad for the person she’s grilling. I kinda hate that about her.

Not one of the strongest books but moves narrative

it was a good listen as always but didn't feel like the strongest book in terms of story lines. seemed to be a filler to move the narrative

Second book of Robb's that I have downloaded. Enjoyed this as much as the first. Nicely woven plot, humour through Peabody, and the narrator does a good job with the various character voices.

This series gets better and better

Have enjoyed ever book so far. The main characters build each time. Must be read in order to really appreciate. Loving it.

I enjoyed this book. It had many funny moments in it and as always I enjoy Roarke and Eve working together. The Peabody becoming a Detective storyline was brilliant as well. I love the development of the characters so you end up caring about a whole bunch of them in the end not just the main ones.

Couldn't get into it

This is the first in death book that I say this about. I just couldn't get into the story, my sister thinks that I have listened to to many one after another. May be this is so but I found this story a little disappointing even though when we got to the end I still didn't know before it was revealed who did it.

Keeps you on your toes

this is the 17th book in this series( according to the narrators, who introduce the continuation of the story as book 18 at the end..., there seems to be some confusion on the audible page, but I just go by which book is stated as the next on the book I am listening to) and where some parts of the content are predictable and come up in every book in the series, the main storyline is fast paced, twisted and keeps going strongly to the end.
There is some further exploration of Ltd. Eve Dallas's lost childhood memories, which affect her focus temporarily, and a different ending to this book compared to all other books with a first.... you will have to listen to the end to find out.

Futuristic - not what I expected

This book is a bit sci fi and set in the future which wasn't clear from the summary. Poor writing style, not what I expected from Nora Roberts writing under JD Robb.

Yet another wonderful read

I’m a project manager & enjoy & learn from Dallas’s ‘setting up an op’. I’m reading the books in order & I am fascinated with the way the players & their lives unfold. A wonderful read from a wonderful writer.