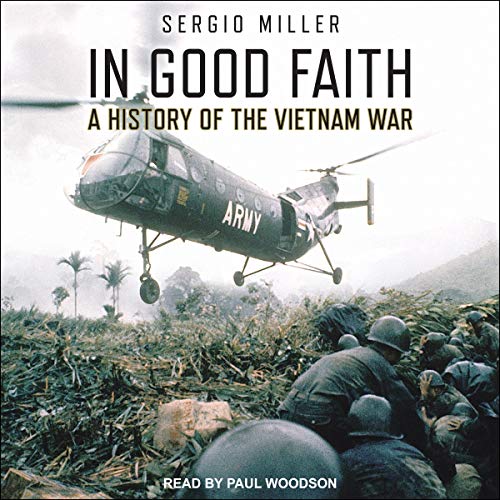 In Good Faith is the first of a two-volume, accessible narrative history of America's involvement in Indochina, from the end of World War II to the Fall of Saigon in 1975. The books charts the course of America's engagement with the region, from its initially hesitant support for French Indochina through the advisory missions following the 1954 Geneva Accords, then on to the covert war promoted in the Kennedy years, then escalation to total war in the Johnson era, and finally to the liquidation of the American war under Nixon.

Drawing on the latest research, unavailable to the authors of the classic Vietnam histories, these two volumes tell the whole story for the first time, including the truth behind the events of the 1964 Gulf of Tonkin incident, which opened the door to Washington's entry into the war, and which can now be told in full thanks to recently declassified National Security Agency top-secret material. Examining in depth both the events and the key figures of the conflict, this is a definitive new history of American engagement in Vietnam.

What listeners say about In Good Faith

Miller is not a historian, and it shows. In the first chapters of the book he goes through a long list of historical figures and their decisions, all made under enormous pressure and with no safety net, and dispenses his judgement. McArthur? And idiot who stumbled too close to the Yalu river and got the Chinese involved in Korea. Eisenhower? Sage for not supporting the French at Dien Bien Phu. No time is spent on the actual options present at the time, no room is made for context. These decisions over here were obviously dumb, these decisions over there were obviously smart. It's a high schoolers history.

It does get better over time, that's why I did finish the book. Miller goes into a good amount of detail when describing south Vietnamese military and civilian politics. His narrative is gripping and well paced. The chapter on the Tonkin Gulf incident is great. I enjoyed the second half of this book.

This is not a bad read overall, but Miller's inability to empathize with the many decision-makers of the era hints at a man who's either never had to make weighty decisions, or has made them callously.