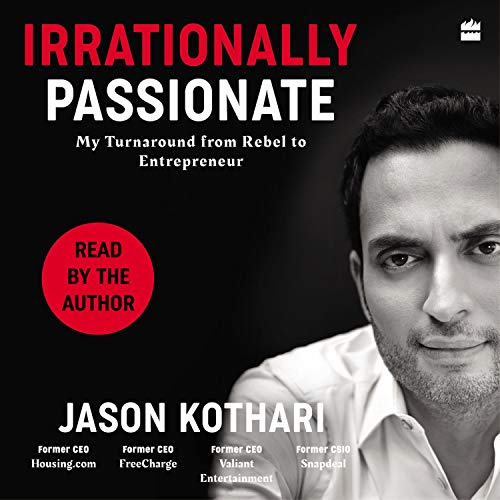 While a college student at Wharton, Jason Kothari scraped together money from family and friends to save his childhood favorite comic book company, Valiant Entertainment, from bankruptcy and bring it back to life. A few years later, he transformed Valiant into the third-largest superhero entertainment company in the world after Marvel and DC Comics and sold it for $100 million. Jason then became a professional turnaround leader and went on to transform distressed Indian Internet icons Housing.com, FreeCharge, and Snapdeal, helping save billions of dollars in value, and advise giants like technology investor Softbank and real estate developer Emaar, who have invested billions of dollars in India.

Irrationally Passionate reveals the inside story of how a rebel, train-wreck kid transformed himself into a successful young entrepreneur and business leader who became one of the top 10 paid executives in India while only in his 30s. From getting his first job as an assistant to Jackie Chan in Hong Kong, to learning strategy from champion Muay Thai fighters in Thailand, to tackling huge personal setbacks, to becoming a CEO in 60 seconds, among many other stories - Jason's inspiring journey across countries, industries, and companies has something for everyone, right from students to entrepreneurs to corporate CEOs to even parents of students and entrepreneurs.

Irrationally Passionate is a highly personal, authentic, open, and complete account of a young entrepreneur's life. Brimming with practical advice and philosophical insights, it will force listeners to reflect on how they perceive life, work, family, and spirituality by giving them a fresh perspective.

What listeners say about Irrationally Passionate

"Irrationally Passionate by Jason Kothari". I got to know about Jason from one of my fellow Entrepreneur as a person who is a firefighter for startups who are at the brink of bankruptcy. I feel him as a special forces person for startups. This book really inspired me to understand how a student from Wharton went on to buy Valiant and grow it to the top 3 companies in the US. The raw stories of the happenings and the narrations really helped me connect with the reality and learn a great deal. Jason is former CEO of Housing, Freecharge, Snapdeal and Valiant. He is my super hero he turns companies and helps employees save their jobs and help investors protect their money and get great return. He's a true startup Entrepreneur and genius for me.